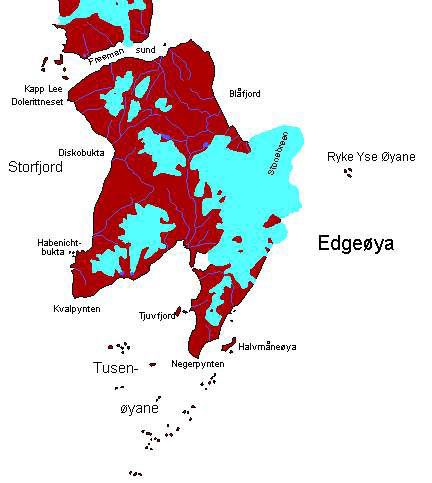 General: Edgeøya (‘Edge-Island’) is the third-largest island within the Svalbard archipelago, with 5150 km2. It is named after Thomas Edge, an English whaler of the 17th century. It is protected as part of of the Southeast Svalbard Nature Reserve.

Geology: As Barentsøya. Rather uniform Triassic sediments (lower Mesozoic, 205-250 million years ago), sand-, silt- and claystone. These were deposited in shallow shelf seas and near the coast (delta sediments etc.), partly in an anoxic (lack of oxygen) environment, thus rich in organic matter and often rather dark in appereance. The sediments are largely undeformed, the layers have more or less kept their original, horizontal position. Some layers are very rich in fossils (ammonites, shells etc.). Some of the deltaic sandstones contain thin coal seams, but due to their low quantitiy and quality, they are not of economic interest.

Within the triassic sediments, there is one layer of black paper shale which often forms steep cliffs, visible for example on both sides of the Freemansund. Where small rivers are cutting through it, there are often little canyons. 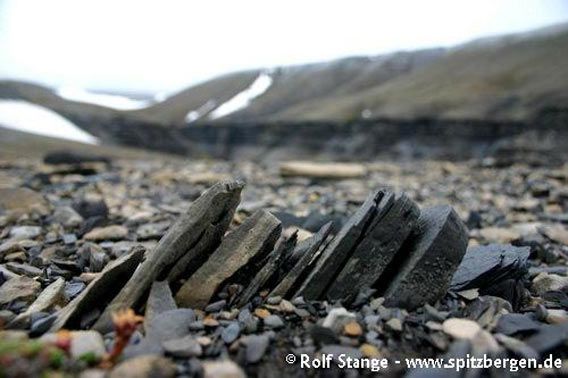 Siltstone cracked up by frost on Edgeøya.

Landscape: As Barentsøya. Wide plateau-shaped mountains and open valleys. Less glaciation than in eastern Spitsbergen, which is higher and receives more precipitation. 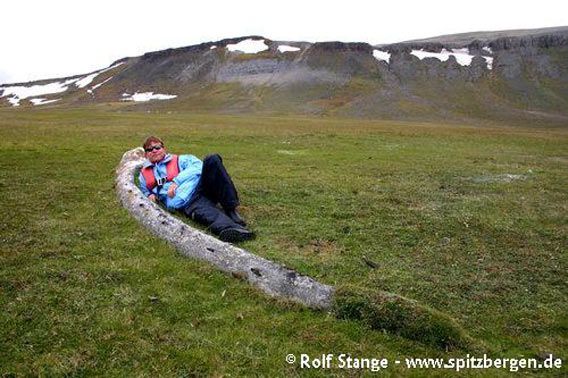 An old whalebone becoming part of the rich tundra again.

Flora and Fauna: As Barentsøya, high arctic. The tundra is often very rich, although with less species than near the west coast of Spitsbergen. The rich tundra supports a strong population of reindeer. 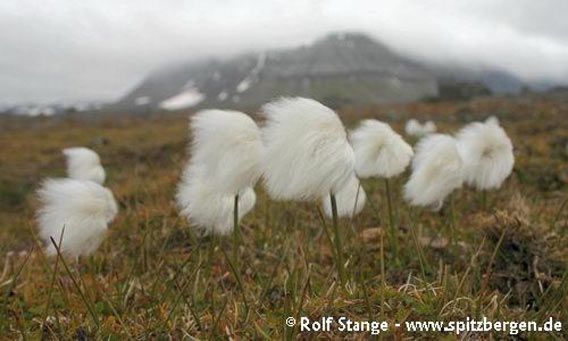 There are several resting sites for walrus at and near Edgeøya, which seem to be increasing in numbers in recent years. In July 2006, I have seen the biggest herd of walrus I have ever seen so far in the Edgeøya area.

History: Discovered in the early 17th century by whalers, and possibly known to the Pomors even earlier than that. The Pomors established a number of hunting stations and used them well into the 19th century. In the late 19th and early 20th century, southeastern Edgeøya was an important area for Norwegian trappers to hunt polar bears. 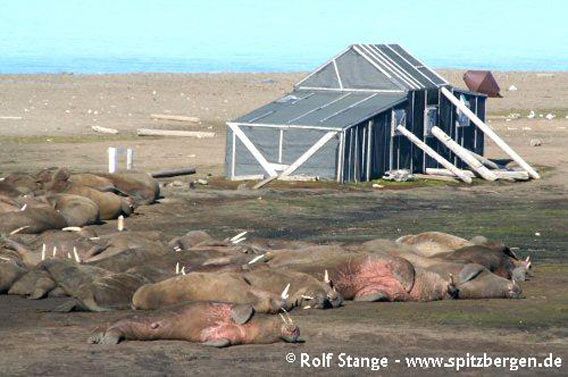 The Swedish-Russian Arc-de-Meridian expedition (1899-1904) had a station at Kapp Lee (or, more precisely, Dolerittneset). At the same place, Dutch biologists established a research station in the late 1960s, where they also wintered to do research mainly on polar bears. The station was abandoned after a few years. 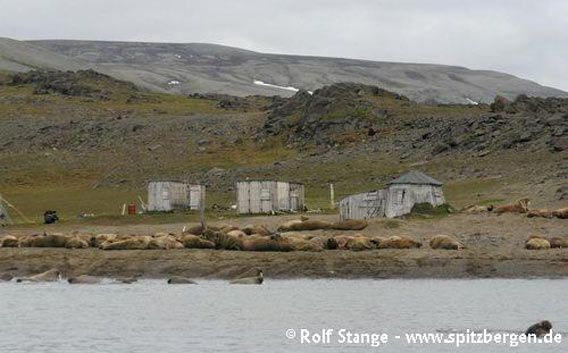 Kapp Lee/Dolerittneset with old houses and an unusually large number of whalrus.