For further detail regarding the individual areas, settlements etc. click on the map! 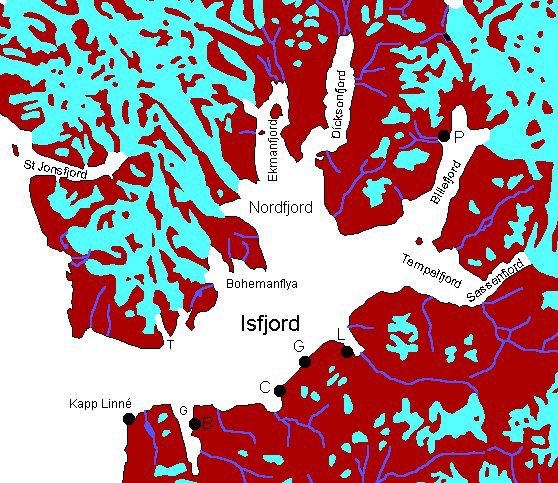 Call detail regions on the map above or on the following links:

General: Isfjord is Spitsbergen’s largest fjord cutting more than 100 km into the island with a lot of different branches. Landscape and history are varied, and most settlements of Spitsbergen are here. The climate is favourable, at least for Svalbard standards, as the gulf stream keeps the fjord ice-free for a long time and temperatures high. The effect of increasing continentality is noticeable deeper in the fjord, with colder winters and warmer summers. Whereas the Isfjord was competely frozen during the late winter in the early 20th century, today this happens only in exceptionally cold years, but the smaller side fjords freeze regularly every winter. Today, most human activities in Svalbard are concentrated in the Isfjord, which puts some pressure on the environment. This includes mining, a growing tourism industry with a lot of snow mobile traffic in the late winter (late February-early May).

There are several protected areas in Isfjord, including several bird sanctuaries, which may not be entered at all during the breeding season (15 May-15 August). Make sure you know where you may go and where not – boundaries are not marked in the field, there are no signs etc.

Geology: Varied in this large area, almost the whole geology of Svalbard is represented from the basement over Devonian Old Red to Permocarboniferous carbonates and evaporites to the Mesozoic-Tertiary clastic sediment cover. Because of the steep dip of the strata, you can find quite complete successions in the entrance area of the Isfjord within a small area, for example the Festningen section. In the west, the rocks have been strongly deformed during the Alpidic orogeny in the lower Tertiary, whereas the strata are mostly horizontal in central and eastern parts, at least on the south side of the Isfjord. There can be detachment faults in homogenous claystones, which are hardly visible, but account for horizontal crustal shortening of many kilometres. For further information, see individual areas (click on the map).

Landscape: Very varied due to differences in geology and climate. There are wide coastal plains at the west coast, behind which there is a glaciated, alpine mountaineous scenery on the northern side of the Isfjord. On the south side, the occurrence of pointed mountains is more or less limited to two N-S stretching mountain chains west of the Grønfjord. East of the Grønfjord, the territory of the characteristical plateau-shaped mountains starts, which are topped by wide plateaus in 4-600 metres altitude. Only few mountains rise over this plateau level, showing what kind of rocks once covered the whole are with a thickness of many hundred metres or probably kilometres, but have fallen victim to erosion. Central and eastern parts of Nordenskiöld-Land (that is the area from the west coast between Isfjord and Bellsund almost to the east coast) feature large ice-free valleys with very rich tunda areas, more than anywhere else in Svalbard. Thus, the area offers good hiking opportunities also for longer treks, but crossing rivers can be very difficult and even dangerous and impossible.

Nordenskiöld-Land between Isfjord and Bellsund is amongst the least glaciated areas of Svalbard, whereas there is a number of calving fronts and a strongly glaciated ‘hinterland’ on the northern side of the Isfjord.

Flora and Fauna: The flora is rich – at least for Svalbard standards – in many places, there are large tundra areas especially on the coastal plains and in the large, ice-free valleys. For example, Colesdalen and Reindalen belong to the biologically most productive areas of Svalbard, with high biodiversity, a dense cover of thick vegetation and accordingly a strong reindeer population, foxes, ptarmigans etc. On steep cliffs near the coast, there is a number of bird colonies with Brünich’s Guillemots, Kittiwakes and, in places, Puffins which are otherwise rather rare in Svalbard. Polar bears are rare compared to other parts of Svalbard, but are seen year-round, sometimes also near the settlements, so the safety routines – most importantly, appropriate weapon and experience – have to be observed everywhere in Isfjord as soon as you set a foot out of any settlement. In recent years, for example 2014, the number of polar bear observations near and even in settlements (Pyramiden, Longyearbyen) has increased; see news and stories from October 2014 on this website.

History: Long and varied. There are many remains of Pomor hunting stations, who may have been here before Spitsbergen was discovered by Willem Barents in 1596. The name ‘Ice Sound’ was given in 1610 by the English whaler Jonas Poole ‘because it was covered with Ice’ (makes sense, doesn’t it?). During the 19th and 20th century, a number of scientific expeditions have visited the Isfjord that makes it impossible to mention all of them here. Norwegian trappers have had their hunting ground here, a tradition that has partly survived until today. Legendary hunters such as Hilmar Nøis and Arthur Oxaas lived in the Isfjord for many years in the first half of the 20th century. Mining started in the late 19th century, but most of the many little mines didn’t survive the stage of exploration and trial mining. All of today’s settlements in the Isfjord were founded as coal mining settlements, Barentsburg and Longyearbyen are the ones which are still in use.