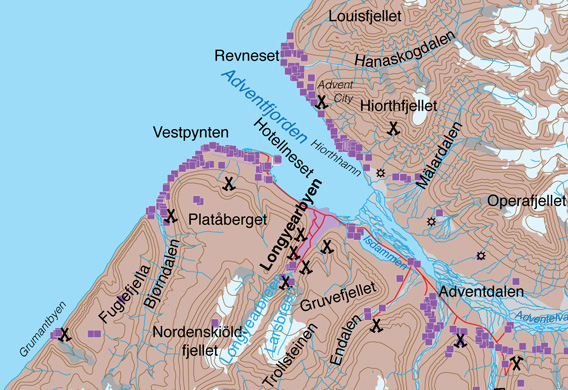 On this page, I am mostly focussing on Adventfjord rather than on the settlement of Longyearbyen itself. To describe Longyearbyen in detail would seriously go beyond the scope of this page – that’s what we’ve got the guidebook Spitsbergen – Svalbard for 😉 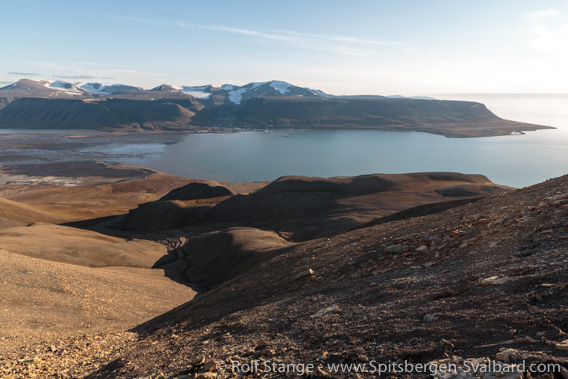 But let’s have a look at Adventfjord, Longyearbyen’s neighbourhood. The area has a lot to offer for everybody interested not only in history and today’s settlements, but also in landscape and a diversity of wildlife and flowers that you may well find surprising if you spend some time in a proper season. It is a great area for all sorts of trips, summer and winter.

And it is absolutely important to take safety serious. On tours in Longyearbyen’s surrounding, you may have to cope with arctic weather and terrain conditions, everything from freezing temperatures (yes, even in times of climate change you can still get some very serious frostbite in the Arctic), storm, fog, icy terrain, steep terrain, glaciers (there are a few crevasses, and there are some huge meltwater channels on all glaciers near Longyearbyen) – all sorts of potential trouble and danger in the Arctic – you name it – it may be just around the corner, also very close to Longyearbyen. And so far, two people have been killed by polar bears near Longyearbyen, in 1995 on Platåberg and in 2020 on the camping site. So, keep you eyes open and take care just as anywhere else in Svalbard! 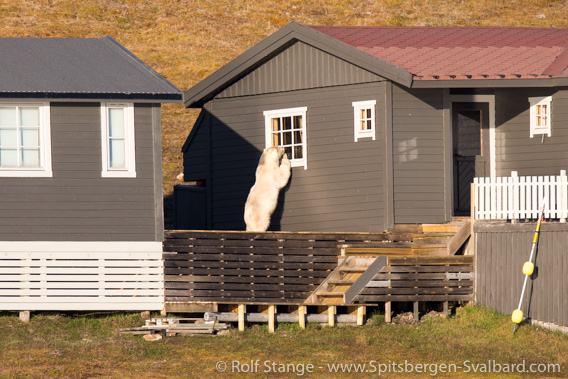 Polar bear at a hut in Adventfjord. It is important to be careful, anywhere and at any time!

There is a whole bunch of pages here on spitsbergen-svalbard.com that have panorama photos and more information on various sites in the Adventfjord area, so a virtual trip to these places is just a mouseclick away!

These are just a few examples. Click here to access an interactive map for the full overview.

Lower Cretaceous and lower Tertiary (upper Cretaceous is missing in Svalbard) sediments, mostly undeformed and gently dipping to south. Because of this, the slopes on the northern side of the Adventfjord are mostly Cretaceous except from the highest parts, whereas only the lower slopes are Cretaceous on the south side (around Longyearbyen). The fantastic outcrop near the road at the harbour has, however, Cretaceous rocks. 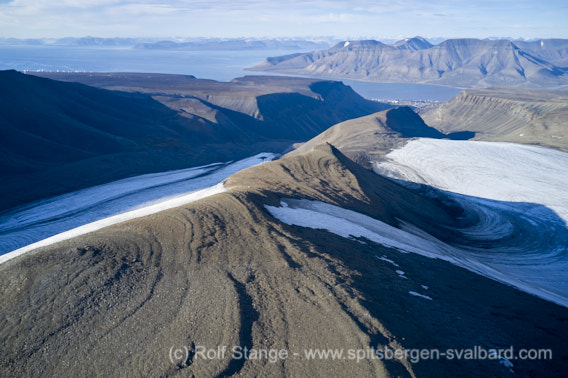 Structures of sediment layers on Lars Hiertafjellet, looking north
(towards Longyearbyen and Adventfjord).

Both Cretaceous and Tertiary consist lithologically of shallow marine and coastal sand-, silt- and claystones. The sandstones are derived from deltaic sediments, the claystones point to stronger marine influence in a larger distance from the coast. There were several transgressional/regressional cycles (relativ sea-level rise and fall). This becomes clear during a hike for example on the Nordenskiöldtoppen, a mountain more than 1000 metres high near Longyearbyen towering above Platåberget. Here, dark claystones alternate with silt- and sandstone. The claystones represent phases of higher sea level, when the coast was far away and only fine grains were deposited here.

When the coast got nearer again due to a relative drop of sea level, sand was deposited which was washed into the sea by rivers. 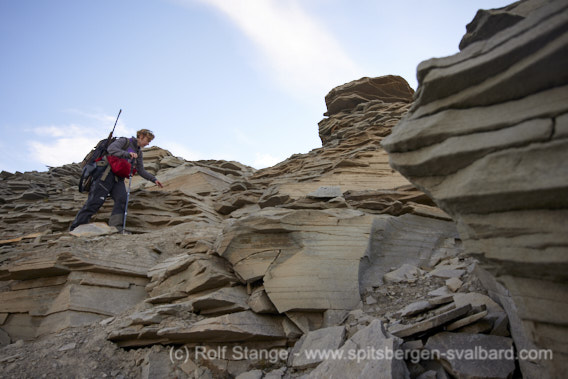 Sandstone, deposited in a marine environment near the coast,
can make hiking challenging today.

Some of the sandstone layers are fossil-rich. For example, leaves similar to those of nazelnut trees are common (check the morains of the glaciers which gather all kinds of rocks in the catchment area).

Both the Cretaceous and Tertiary sediments have coal seams, which were the base for coal mining and thus for the existence of Longyearbyen throughout most of its history.

Most striking, at least in comparison with other parts of Svalbard, is the dense land-use, but this does not mean that nature does not have anything to offer here. The landscape is characterised by the plateau-shaped mountains which are so typical for central and eastern Svalbard, with high plateaus 400-500 metres above sea level. The plateaus are wide stone-deserts, partly with frost-patterned ground and largely free of vegetation.

Most rocks above this level have been eroded – in other words, they have been there at some time. But now, only a few mountains tower higher than the plateau such as the Nordenskiöld-Toppen and Trollsteinen near Longyearbyen. Here, one can still see what kind of rocks once covered the whole area, but the highest (youngest) ones are still lower Tertiary. Around Longyearbyen, the lower Tertiary sandstone of the ‘Firkanten Formation’ forms conspicuous cliffs which are cut into regular, spectacular towers by erosion. The slopes are mostly covered with scree (rocks with mostly sharp edges, from frost shatter).

Compared to other regions within Svalbard, Adventfjord and Longyeardalen may appear to be a bit grey-brown in colour with little contrast, which is due to the colour of the rocks, and there are only few and relatively small glaciers. 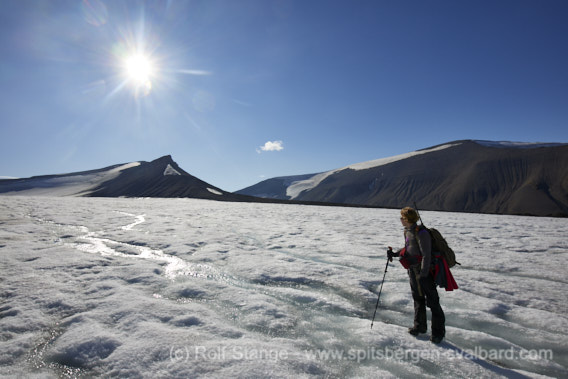 Both are surprisingly rich, despite of the presence of more than 1500 humans. There is nice tundra in Bjørndalen and on the lower slopes between there and Longyearbyen as well as in Adventdalen. There, you may even find the polar birch, which is rare in Svalbard – good luck 🙂  You can find the polar birch in Endalen.

Near Longyearbyen, there are small colonies of Little auks nesting on the higher slopes. They breed under boulders, so you don’t see them nesting, but you see the birds flying in and out and sitting on rocks. If you want to see Arctic terns, Kittiwakes, Snow Bunting and, with some luck, even Grey phalaropes, then the camping site near the airport and the artificial lagoon between the camping site and the coast is a good place to visit (keep your distance from breeding birds, don’t disturb them, see rules). 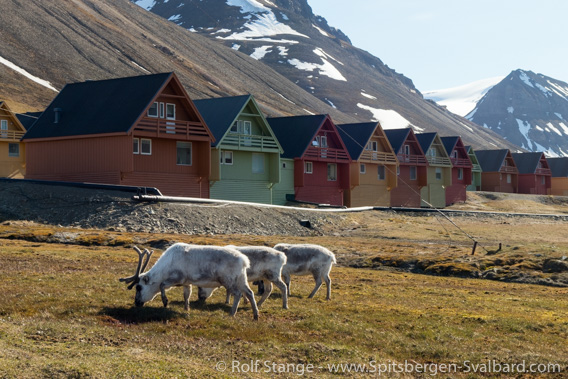 In Adventdalen, you may see King Eiders near some small ponds around June. The elusive Ivory gull may be seen near the dogyard just outside Longyearbyen in the Adventdalen. It is not unusual to see arctic fox and reindeer even inside Longyearbyen.

Coal mining was the basis for most human activities in Adventfjord in historical times, at least indirectly. First attempts to mine the coal occurrences were made already before Longyearbyen (or, more correct, Longyear City) was founded. The first mine in Adventfjord was on Blomsterdalshøgda (“Trøndergruva”, behind today’s airport) and in Advent City (on the north side of Adventfjord) and, contemporary with Longyear City’s early years, in Hiorthhamn (also on the north side of Adventfjord). There is still something to see at all of these places (especially in Hiorthhamn; Blomsterdalshøda is the easiest one to reach, though), so they are interesting excursion sites. 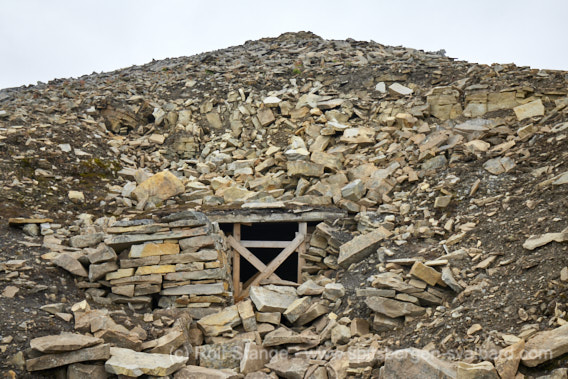 “Trøndergruva” on Blomsterdalshøgda (on the north slope of Platåberg, behind the airport) was Spitsbergen’s first “real” coal mine. Coal was mined here from 1903 to 1906. 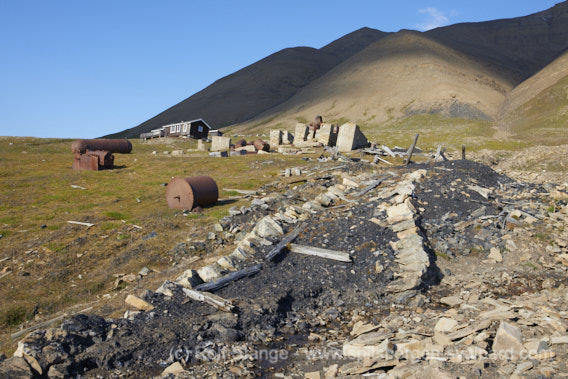 Remains of mining activities in Advent City,
which was active on a moderate scale from 1904 to 1908.
The actual mine was on the slope in the background, to the left of the little valley,
just above the dark area (coal).

The American entrepeneur John Munro Longyear saw the potential for coal mining during a cruise and founded the Arctic Coal Company Ltd. Mining in ‘Advent Bay’ started in 1906. Longyear sold everything to the Norwegian Store Norske Spitsbergen Kullkompani (SNSK, today mostly known as Store Norske = Great Norwegian) in 1916 because of the development of the global markets as well as local difficulties. Mining has been reduced to a more symbolic level in mine 7 in nearby Adventdalen which supplies the local coal power plant. Norwegian coal-mining activities then centred on the mines Svea Nord and Lunckefjellet that both belonged to Sveagruva, but the mines there were closed in 2015 and not much will remain there after a large clean-up that is currently (2020) going on.

Some impressions of what you can see and experience in the Adventfjord area.