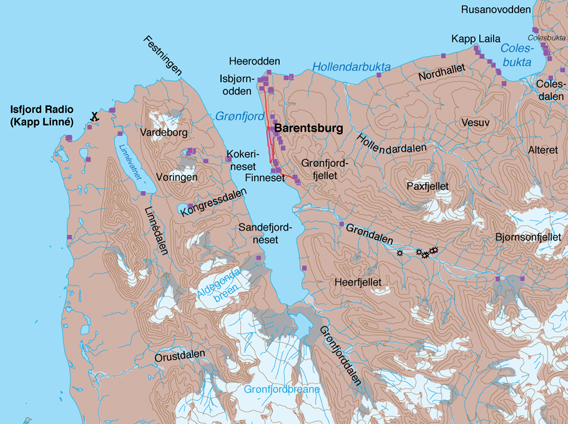 This page is about the natural and human history of the Grønfjord area and the Isfjord coast further east. There is a dedicated page about Barentsburg. In earlier times, Grønfjord was known as Green Harbour. Both names mean the same. 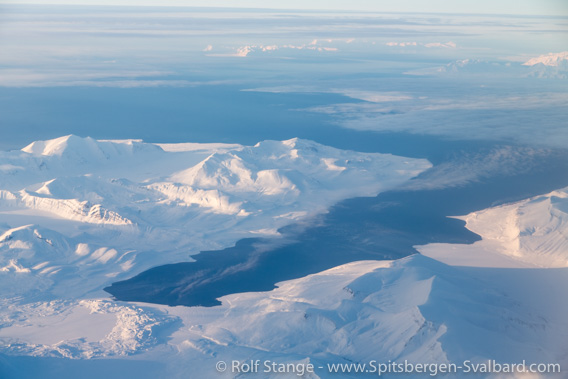 Grønfjord from above as a snow landscape in March.
Seen from the scheduled flight, view to the northwest.

But the area is, of course, heavily influenced by Barentsburg and the abandoned double settlement of Colesbukta and Grumantbyen. You will find traces of activities related to these settlements, mostly mining, almost anywhere. This is sometimes interesting and sometimes rather annoying, when it comes to industrial waste, often harmful to wildlife, that is just left in the arctic environment. 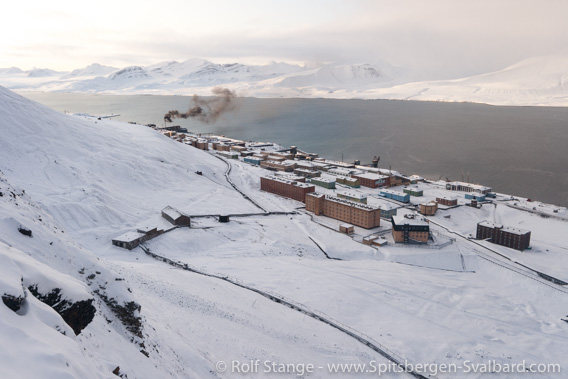 View over Barentsburg and into Grønfjord: snow landscape in the early winter (October).

Nevertheless, the area has one of Spitsbergen’s richest tundra environments, in Grønfjord, Colesdalen and other large valleys. There and near Grumantbyen it is recommended to boil water thoroughly before drinking it or using it to prepare food or other hygienically sensitive purposes, as there are introduced mice that can spread fox tapeworm (Echinococcus multilocularis). An infection is unlikely, but if this kind of disaster happens to strike, then it is extremely dangerous.

The area has good opportunities for summer hiking and winter expeditions, from day hikes – from Bjørndalen to the west or starting in Barentsburg – to longer trips. Hiking from Longyearbyen to Barentsburg (or the other way around), including travelling the other way by boat, is an option for a first several-day hiking tour in Spitsbergen. But I have to admit that I prefer the hiking opportunities and the scenery in Dickson Land, which is also reasonably accessible from Pyramiden. 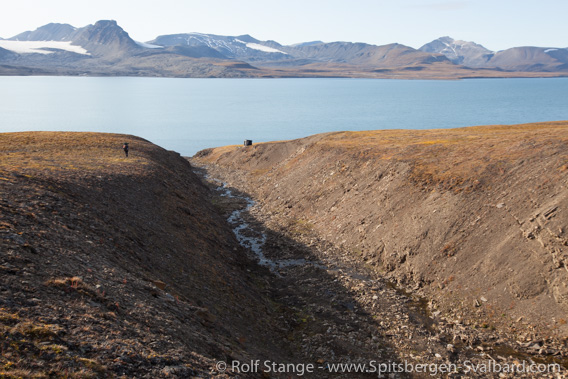 Hiking in Grønfjord. There are plenty of these steeply incised little river valleys in the area, which require time and energy especially when you have to negotiate them
with a heavy bagpack.

The coastal area between Grønfjord and Colesbukta is a frequently used winter route as it is one of two main snow mobile routes between Longyearbyen and Barentsburg. There is another route following some inland valleys (there is a detailed description of this route and other ones in the guidebook Spitsbergen-Svalbard). Both routes may also be used on hiking tours in the summer, but they will include various terrain challenges including river crossings and wet tundra in Colesdalen. 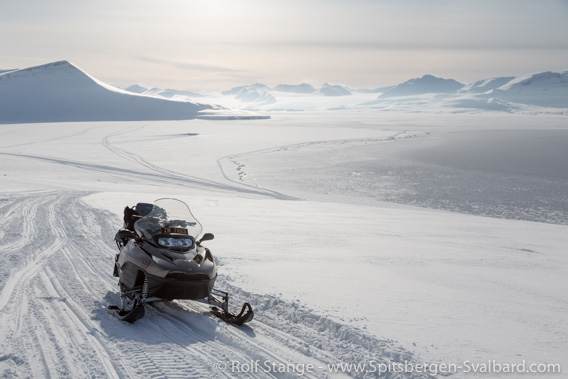 On snow mobile tour in Grønfjord, on the way to Barentsburg.

But the costal route between Colesbukta and Grønfjord – locally often referred to as the Kapp Laila route – is not at all a beach walk or, in the winter, a drive along the coast. The coast itself is mostly a low cliff. And there is a couple of terrain challenges in shape of several deeply incised river valleys which can be difficult to negotiate, now matter how you are travelling. During a snow mobile trip, navigating the slopes around these valleys can be pretty challenging especially for beginners. 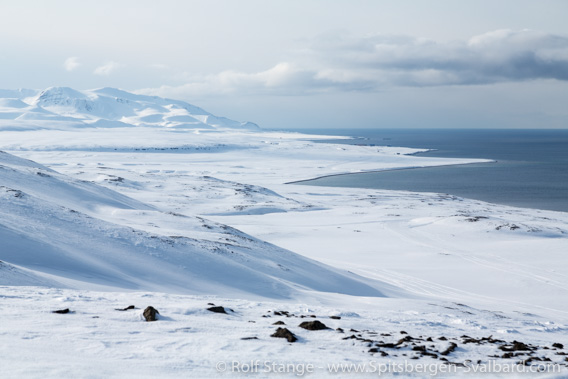 Snow mobile tour to Barentsburg: Nordhallet, the slopes south of the Isfjord coast between Colesdalen and Hollendardalen. Looking west, towards Hollendardalen.

A lot depends on the weather during the days before the trip: in case the ground is icy and slippery, the steeper slopes, especially those related to the above-mentioned, can be difficult or even dangerous and impossible. This potentially tricky slope area between Colesbukta and Hollendardalen is called Nordhallet; the area is more of an obstacle than anything else, the most scenic aspect being the wide view over Isfjord. Other than that, there are plenty of other parts of Spitsbergen that are more scenically attractive than Nordhallet. And considering the difficulties and potential dangers, it is certainly recommended to join a guided tour unless you have relevant experience and knowledge, or at least pay good attention to local advice.

The only legally protected area in the region is the Festningen geotope, a geological sanctuary on the Isfjord coast west of Grønfjord. But it does not include access restrictions. 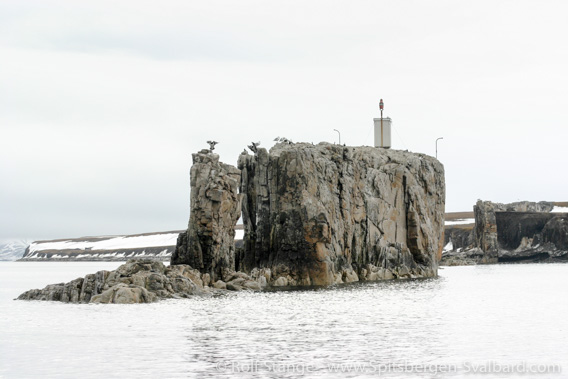 Sandstone cliffs at Festningen at the entrance to Grønfjord.

The bedrock on the west side of Grønfjord consists mostly of steeply tilted sedimentary rocky, mainly fossil-rich limestones from the upper Carboniferous and lower Permian. These layers are running through the mountains Productustoppen, Braganzatoppen and Vardeborg to Kapp Starostin, giving them a special structure and appearance. See section geology (Kapp Starostin) on the page Kapp Linné-Festningen. 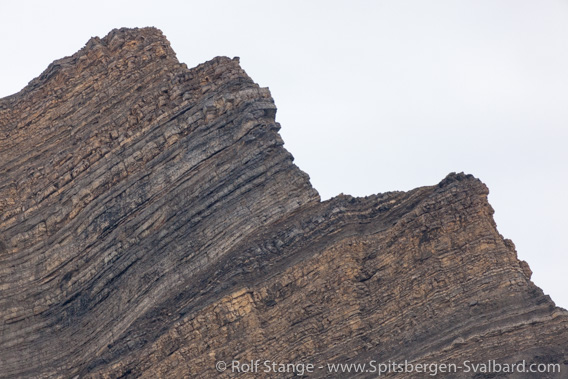 East of Grønfjord, we find bedrock consisting of mostly horizontal lower Tertiary layers. There are alternating layers of sand-, silt- and claystone; the sandstones are coal-bearing and partly rich in fossils (imprints of leaves like from hazelnut trees etc.). The change from sand- to claystone is due to changing relative sea level and thus of changing depositional environment from deltaic to deeper shelf and can nicely be seen in the slopes, especially when you ascend one of the few mountains towering above the wide-ranging plateau, which is 400-500 metres high. In some of the sandstones, you can find nice ripple marks and other sedimentary structures. 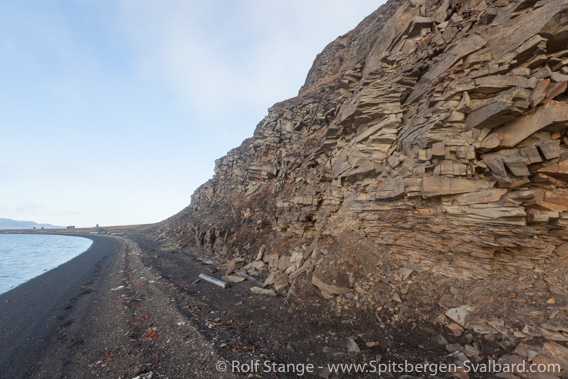 The layers are mostly horizontal and tectonically undisturbed, but there are some smaller faults. A thrust cuts the rocks just east of Grumantbyen and is nicely visible from the Isfjord. This fault caused difficulties for the Russian mine in Grumantbyen, which was one of the reasons for closing the mine in 1962. 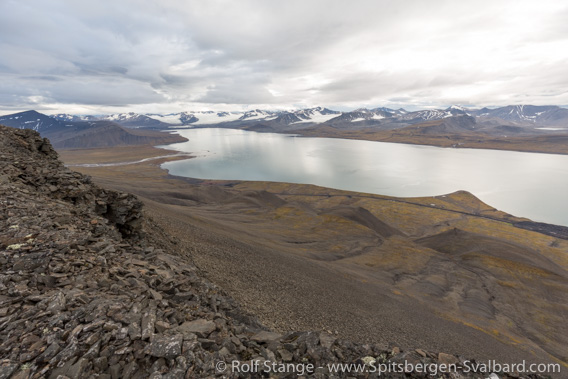 The characteristic landscape in most parts of Nordenskiöld Land east of Grønfjord includes plateau-shaped mountains with wide plateaus in an elevation between 400 and 600 metres. Few mountains tower above this plateau and reach a good 1000 metres above sea level; otherwise, the rocks once covering the whole plateau have been eroded. The area is mostly unglaciated and has some large ice-free valleys such as Colesdalen and Grøndalen. The valley bottoms are mostly occuppied by braided rivers, the larger branches of which can be difficult to cross. This also applies to some of the lagoon outlets and meltwater rivers in inner Grønfjord. 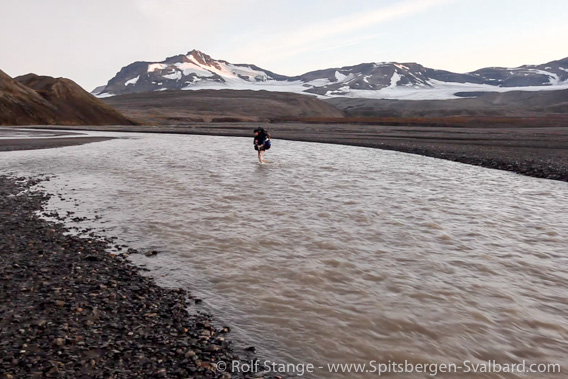 The net-like rivers of these rivers form aestetic patterns, which are especially nice when seen from an elevated position. Another specialty of the large, ice-free valleys are pingos: permafrost phenomena consisting of large, ice-filled cones, up to 30-40 metres high. There are several pingos in Grøndalen. 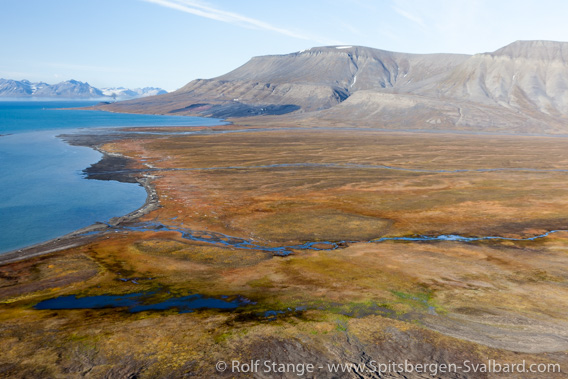 The tundra near the coast is amongst the richest tundra areas of Spitsbergen, especially in Colesdalen, but some areas around Grønfjord are also comparatively lush and green. Reindeer are accordingly abundant. 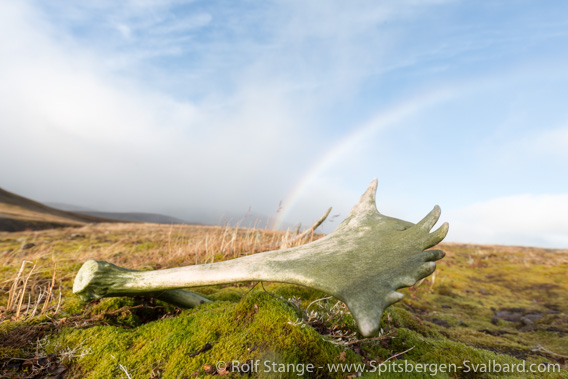 Reindeer antler on the tundra at Sandefjordneset. 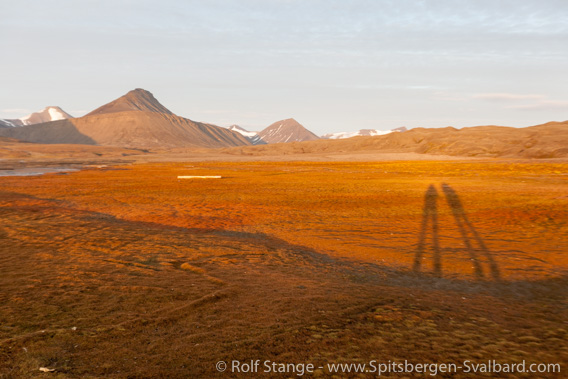 A faunistic specialty in Svalbard, which is otherwise free of rodents, are mice which live in the settlements. Surprisingly, they have survived until today in Grumantbyen, although the settlement was abandoned in 1962. They do spread beyond the former settlement area and there are records of them as far away as Adventdalen, but during the winter, they seem to be restricted to Grumantbyen, at least so far. They may spread parasites (tapeworm), so it is strongly recommended to boil drinking water thoroughly in this area. 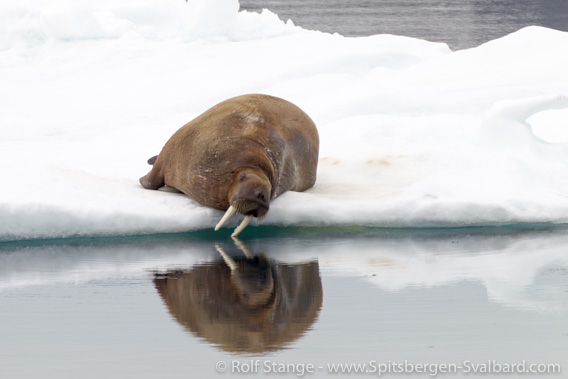 Walrus on drift ice floe: both are rare visitors in Grønfjord.

Barentsburg has its own influence on the vegetation and wildlife, for example due to the introduction of new plant species. The Sysselmannen is trying to control or, where possible, eradicate them. 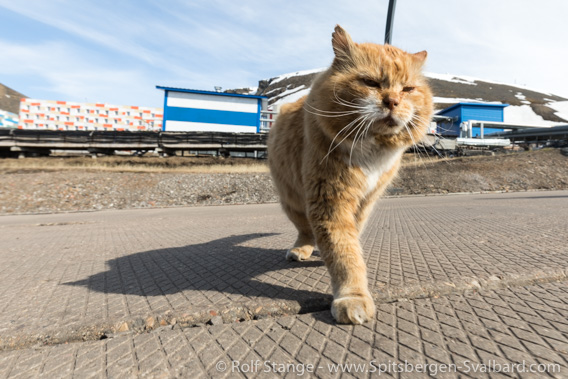 Cat in Barentsburg: not really part of Spitsbergen’s natural environment.

Isfjord was one of the first parts of Spitsbergen to be discovered and used extensively. The name Hollendardalen tells already that Dutch 17th century whalers frequented the area, which was later also used by both Pomors and Norwegian trappers. There are, however, not many visible remains from these early periods, which is in part due to the more recent infrastructure.

At Finneset south of Barentsburg, there was a whaling station in the early 20th century, and a radio station for communication with the mainland. The radio station was in 1933 moved to Kapp Linné because of the topography which was more suitable for radio communication.

As is evident from the name, Barentsburg was originally founded by a Dutch mining company (Nederlandsche Spitsbergen Compagnie = NeSpiCo), but after a few years it was sold to the Russians. It is the only active Russian mining settlement in Spitsbergen, with a growing emphasise on tourism in recent years. See the page about Barentsburg for further information. 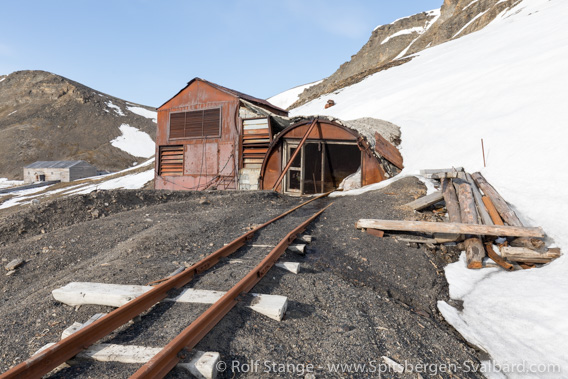 Old mine entrance on the south side of Gladdalen directly above Barentsburg.
The first mine in the area, from the Dutch years, must have been in this area.

Grumantbyen was another coal mining settlement, originally British-Russian an later entirely Russian and at some point the largest settlement of Spitsbergen with a good 1000 inhabitants, which is hard to believe when you see the few houses which are left at the steep coast. The mine and consequently also the settlement were abandoned in 1962. Because of the lack of suitable anchoring positions and harbour facilities at Grumantbyen, the coal was shipped from Colesbukta. The old settlement there was the harbour for Grumantbyen.

There is a page about Colesbukta with more information about that place.

Some impressions from the area around Grønfjord. Different kinds of trips, different seasons.