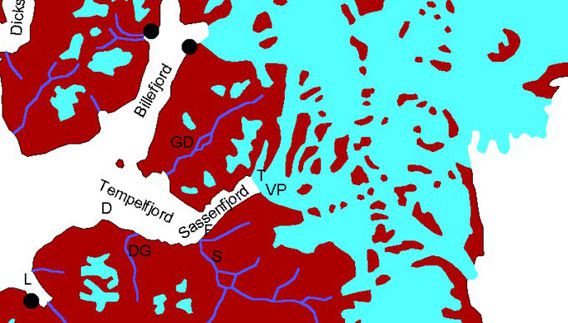 General: Very scenic, innermost branch of Isfjord. As Tempelfjord is so beautiful and close to Longyearbyen, it is a popular destination for day trips in the winter (March-early May) with snow mobiles or dog sledge, but also in the summer for boat excursion. The country east of Tempelfjord is strongly glaciated. The names are a bit confusing: it is one and the same waterway that is called Tempelfjord in its inner part and Sassenfjord further west, until it joints Billefjord. But Sassenfjord is indeed an elongation of the large valley Sassendalen, to which Tempelfjord was a tributary side valley before it was drowned in seawater.

Tempelfjord is easy to reach as a day trip from Longyearbyen by snow mobile in March and April, and it is a beautiful place at that time of the year. Have a look here for some impressions:
Tempelfjord April 2013
Tempelfjord May 2013 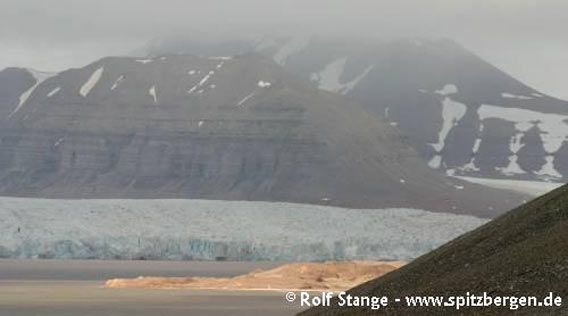 Geology: Mostly Permocarboniferous sediments. The carboniferous consists of carbonates, evaporits (anhydrite/gypsym) and clasic sediments, whereas the upperlying Permian is usually quite obvious because of its hard (cliffbuilding) Limestones (Kapp Starostin Formation). On the southern side of the inner part of the fjord, Triassic clay-/silt- and sandstones are exposed. The Permian-Triassic boundary is not represented, though, as there is a hiatus (uppermost Permian and lowermost Triassic rocks are missing). The overall dip is to the southwest. The Billefjorden Fault Zone cuts through the entrance of the fjord and displaces upper Palaeozoic/Mesozoic rocks north and south of it, although it was active mostly during the formation of the basement (at least pre-Carboniferous). Nice folds and faults are visible in the Billefjord, east of De Geerdalen and in the inner Nordenskiöld Land (the land area between Isfjord and Bellsund). 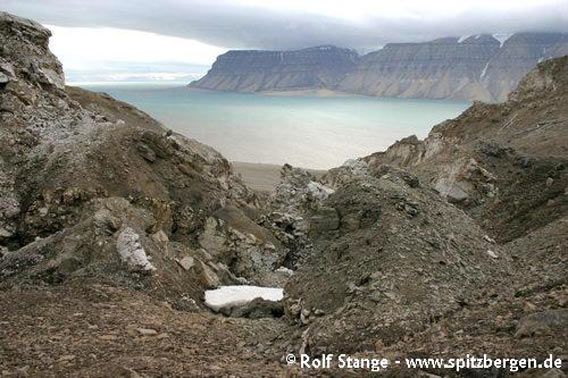 On the south side of the Tempelfjord, there are upper Jurassic-Cretaceous intrusions (dolerite/diabas) in places, which belong the the same intrusive suite which is very common in eastern Svalbard (Hinlopen Strait, Barents– and Edgeøya, Tusenøyane etc.). Because of their relative hardness, they often form prominent cliffs, such as at Diabasodden (‘Diabas Point’). This cliff is home to Brünich’s Guillemots, Black guillemots and Puffins. In De Geerdalen, Hyperitfossen is a nice waterfall cascading over a cliff of dolerite (‘hyperite’) rocks (there are geese breeding on top of the cliffs, keep your distance during the breeding season).

Landscape: The scenic centerpiece, next to the mountain to which Tempelfjord owes its name, is the ice cliff of Tunabreen, the glacier in the inner part of Tempelfjord. The panoramas below will make it quite clear why this is so.

As in other places, do the hard, Permian carbonates form prominent cliffs in the mountain slopes, which have been dissected by erosion, so often they form regular towers. One of the most beautiful mountains in Spitsbergen is Tempelfjellet (‘Temple mountain’), on the northern side of the fjord with the same name (Skansen on the eastern side of the Billefjord is similarly beautiful). In the innermost part of the Sassenfjord, there is the calving front of the glaciers Tunabreen and Von Postbreen. The coast is mostly formed by steep cliffs and scree slopes, but there are very nice beach ridges on a coastal plain on the northern side of the fjord at Bjonahamna.

On the southern side of the fjord, where Triassic sediments are exposed due to the general southwestern dip of the strata, the slopes are mostly less spectacular and less regularly shaped by erosion, at least in comparison with the high standards set by the magnificent Tempelfjellet. This does not mean that the landscape is not nice here, it offers a number of great hiking options with beautiful views. A good area is Diabasodden with a number of daytrips to do in the area, from easy walks to serious mountain hikes.

Flora and fauna: There are several birdcliffs on the steep cliffs around the fjords here. Diabasodden on the southern side of the Tempelfjord is easily accessible and offers a nice cross section through the biology of the area: breeding Brünich’s guillemots and Puffins, and arctic foxes and reindeer are never far away here (keep your distance from breeding birds, especially geese which are often on top of cliffs!). And if you think that there will never be a polar bear so close to Longyearbyen, then you may meet a big surprise…

History: I don’t know of any visible remains from the days of the whalers, but they must have been around, and so where the pomors, who left some visible remains. In the late 19 century, Norwegian trappers started to use the area intensively. Hilmar Nøis, already during his lifetime a legend, has built his home at Fredheim at the mouth of the large valley Sassendalen – one of few trapper huts with two floors in Svalbard, which became a cosy home soon when Nøis’ wife moved in (The first one got mad quickly during the winter in Spitsbergen. But the second one, Helfrid Nøis, obviously like it there, she lived a number of years in Fredheim together with Hilmar until they finally retired). Click here for a panorama tour of Hilmar Nøis’ famous hut Fredheim.

An attempt to mine gypsym was done at Kapp Schoultz on the south side of the Sassenfjord, a few remains can still be seen. It didn’t go anywhere, the occurence turned out to be economically worthless. 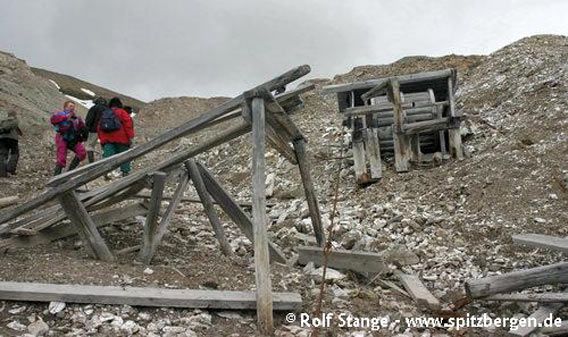 Remains of trial gypsym mine at Kapp Schoultz.