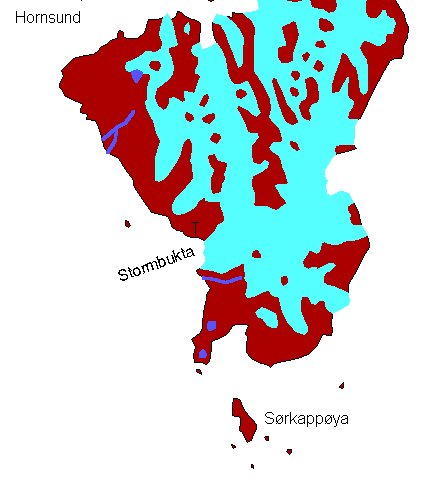 General: Southernmost part of Spitsbergen. The climate is rather high polar with more drift ice than further north at the west coast. This is due to cold sea currents which come south in eastern parts of Svalbard and drift around South Cape to follow the west coast to the north again, where these cold, polar waters mix with more temperate waters brought up here by the Gulf Stream. The area is geologically, landscape-wise and historically interesting, but difficult to get to. The rocky coast is very exposed to the north Atlantic with its sea and weather conditions, so small boat landings are often impossible. Additionally, some places are protected as bird sanctuaries, where approach and entrance is prohibited 15th May-15th August (Sørkappøya and nearby islands and rocks). The whole area belongs to the South Spitsbergen National Park.

Geology: The coast between Hornsund and Stormbukta consists of basement rocks, mostly carbonates (limestone, dolostone). Solution processes have produced karst phenomena, of which a large spring in Stormbukta is the most conspicuous one. This spring, named ‘Trollosen’ (Troll spring), produces some 10 m3 (10 000 litres) of water per second, which makes it the largest spring within Svalbard. The water follows a short canyon to the sea. A little distance further south, closer to the glacier, there are some more, smaller springs which smell like rotten eggs (‘sulphur’). This smell does not indicate any volcanic activity, it is because the groundwater penetrates rocks with some stinky stuff inside (for example, organic matter in shalestone).

Click here for panorama photos of the very southernmost part of Spitsbergen.

South of Stormbukta are Mesozoic and Tertiary sediments exposed. The Tertiary sediments are coal-bearing, as they are further north (Bellsund, Isfjord). The southernmosts parts of Spitsbergen including Sørkappøya are composed of hard, fossil-rich Permian limestones (Kapp Starostin Formation).

Landschaft: Similar to other parts of the west coast anywhere south of the Kongsfjord, there are wide coastal plains between Hornsund und Sørkapp. Solution of carbonate rocks belonging to the basement leads to interesting carst phenomena such as the large spring Trollosen, see above. The interiour of the country is strongly glaciated. There is a specialty on Kistefjellet, which is Spitsbergen’s southernmost mountain: according to the topographic map, there is a pingo on top (I have never seen it, but who knows, maybe one day…).

Flora and Fauna: Tundra in the areas of the coastal plains, the interiour is barren and mostly covered with ice. There are colonies of Kittywakes on steep slopes such as in some smaller canyons. Because of the ice conditions, the Sørkapp area is an important migration area for polar bears. The smaller islands such as Sørkappøya are important breeding sites for Common eider ducks and thus protected – landings are not allowed during the breeding season.

History: Because of the exposed coasts, activities here were fewer than in the fjords further north. The south cape has always been an important hunting area, as polar bears came with the drift ice from the east. On the small island Sørkappøya, there are remains of hunting stations of the Pomors at at least three different sites, all of them potentially from the middle of the 16th century. This would make them older than the period of whalers and even the ‘official’ discovery of Spitsbergen made by Willem Barents in 1596. In the late 19th and early 20th century, Norwegian trappers such as the well-known Petter Trondsen hunted polar bears with self-shot, rifle and sometimes with poisoned meat. All this was a dangerous business, as the ice could start to move at any time, and occasionally people who happened to be out on the ice at the wrong time, disappeared traceless.

1944/45, Germany had a manned war weather station with the code-name ‘Landvik’ in Stormbukta. Some remains can still be seen. Click here for panorama photos from Stormbukta. 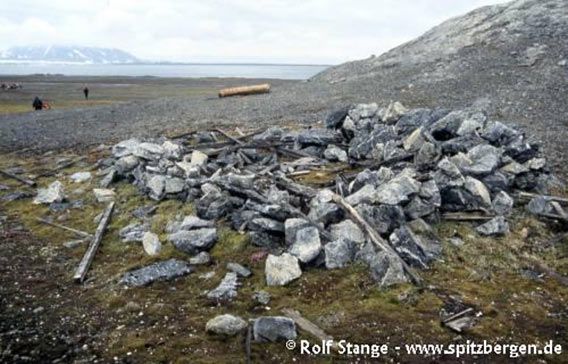 Remains of the German war weather station in Stormbukta.