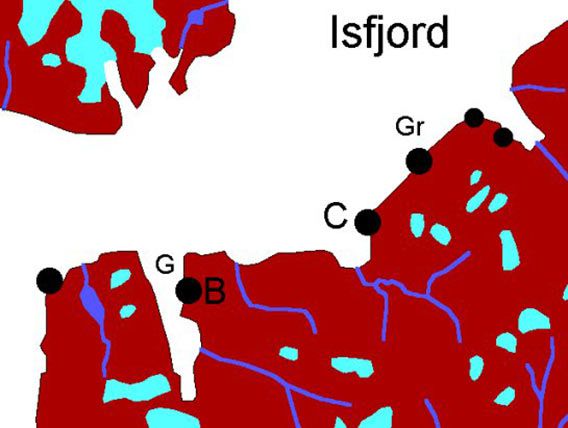 General: Southern coast of the Isfjord with an active and several abandoned Russian coal mining settlements. The future may see a new Russian coal mine in the Colesdalen, which is one of the richest tundra areas of Svalbard. Barenburg is still an active Russian mining settlement and one of the most popular (or, to be more precise, one of the most frequently visited) tourist destinations in Svalbard. It is a daytrip both in the summer by boat and in the winter with snowscooters.

The area has nice tundra and good hiking opportunities. 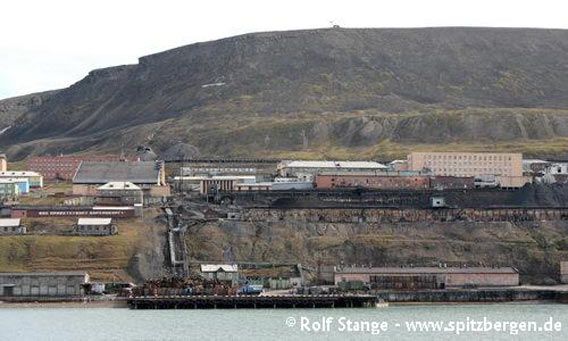 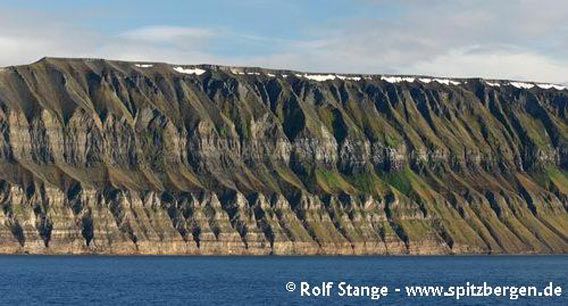 Fuglefjellet between Bjørndalen and Grumantbyen with horizontal sedimentary layers which are dissected by erosion, thus forming protruding towers.

Landscape: Characteristic plateau-shaped mountains with wide plateaus in an elevation between 400 and 600 metres. Few mountains tower above this plateau and reach a good 1000 metres above sea level; otherwise, the rocks once covering the whole plateau have been eroded. The area is mostly unglaciated and has some of the largest ice-free valleys of Svalbard (Fardalen, Colesdalen, Grøndalen, Reindalen). The valley bottoms are mostly occuppied by braided rivers, the larger branches of which can be difficult to cross (especially Adventdalen, Sassendalen, Reindalen, but other rivers can also be difficult depending on weather, season etc. Never try to cross with bare feet!). The net-like rivers of these rivers form aestetic patterns, which are especially nice when seen from an elevated position. Another specialty of the large, ice-free valleys are pingos: permafrost phenomena consisting of large, ice-filled cones, up to 30-40 metres high. Pingos are abundant, for example, in Adventdalen, Reindalen and Grøndalen.

Flora and Fauna: The tundra near the coast belongs to the richest tundra areas of Svalbard, especially in Bjørndalen and Colesdalen. Reindeer are accordingly abundant. Steep cliffs near the coast are home to seabird colonies, such as Fuglefjellet between Grumantbyen and Bjørndalen. A faunistic specialty in Svalbard, which is otherwise free of rodents, are mice which live in the settlements. Surprisingly, they have survived until today in Grumantbyen, although the settlement was abandoned in 1962. They have not spread beyond the area of the old buildings.

History: The Isfjord was one of the first parts of Spitsbergen to be discovered and used extensively. The name Hollenderdalen tells already that Dutch whalers from the 17th century frequented the area, which was later used by both Pomors and Norwegian trappers. At Finneset south of Barentsburg, there was a whaling station in the early 20th century, which featured a radio station for communication with the mainland. The radio station was in 1933 moved to Kapp Linné because of a topography which was more suitable for radio communication.

As is evident from the name, Barentsburg was originally founded by a Dutch mining company, but quite soon it was sold to the Russians. At the moment, it is the only active Russian mining settlement in Spitsbergen, although mining activities are currently declining here. In 2005, there were only 600 people living in Barentsburg, mostly from Ukraina, where there are coal mines with a similar geology. Trust Arktikugol, the mining company which is owned by the state, also used to run a mine in Grumantbyen, which once was the largest settlement of Spitsbergen with a good 1200 inhabitants, which is hard to believe when you see the few houses which are left at the steep coast. The mine and consequently also the settlement were abandoned in 1962.  Because of the lack of suitable anchoring positions and harbour facilities at Grumantbyen, the coal was shipped from Colesbukta. The old settlement there was the harbour for Grumantbyen. The future may see a new Russian coal mine in Colesbukta, possibly with road connection to Barentsburg. Neither a mine in Colesdalen, which is an area with extremely rich tundra, nor a road would be desirable from an environmental position. 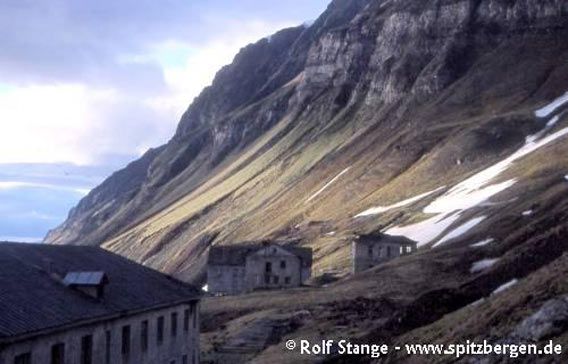