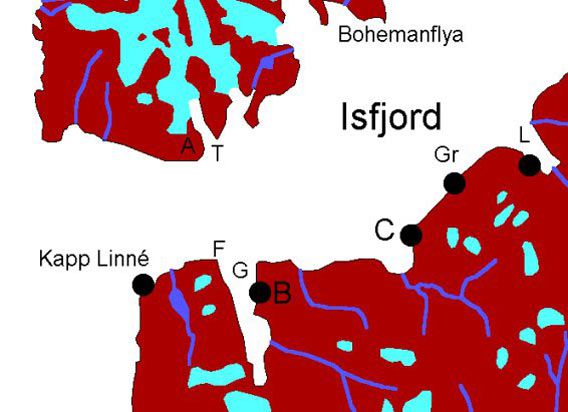 General: Kapp Linné is at the west coast south of the entrance to the Isfjord. In 1933, a radio and weather station was established. There is a bird sanctuary directly west and south of the station area, which may not be entered between 15th May and 15th August. The southern side of the Isfjord between Kapp Linné and the Grønfjord is geologically, landscape-wise and historically very interesting – one of my favourite areas in Svalbard.

Geology: The southern coast of the Isfjord between Kapp Linné and the Grønfjord is geologically interesting and well-known as ‘Festningen-Section‘. On a coastal stretch of less than 10 km, you find a relatively complete cross section from the pre-Devonian basement until the lower Tertiary, the youngest pre-Quaternary bedrock in Svalbard. This is due to the steep eastern dip of the strata, they are standing more or less vertically with a N-S trend, which is because of the tectonics during the lower Tertiary Alpidic orogeny. With a walk of a few kilometres, you may cover more than 300 million years of Earth history! You start at Kapp Linné with weakly to medium-metamorphosed basement rocks (phyllite, quarzite). In the northern slopes of Linnéfjellet, you can see the basement/cover-rock boundary; when you have reached the ridge which forms the northern elongation of Linnéfjellet, you have passed the boundary and reached the hard Carboniferous quarzitic conglomerates (Devonian sediments are missing in this area). Very conspicuous is the mountain on the eastern side of Linnévatnet (Lake Linné). Its northern elongation stick out into the Isfjord, forming a prominent cap, the so-called Kapp Starostin, which gave its name to the hard, Permian carbonate rocks of which it consists. These carbonates, mostly limestone, are rich in fossils such as brachiopodes and sponges and they are known by the name Kapp Starostin Formation. These rocks are common in many parts of Svalbard. West of Kapp Starostin, between the cape and the Linnéelva (Linné river), there are sink holes (karst phenomena) due to solution of carbonate rocks. The Mesozoic succession starts with Triassic sediments east of Kapp Starostin (the Permian-Triassic boundary is missing in Svalbard, as there is a regional hiatus). The Mesozoic sediments consist of relatively uniform clay- and siltstones and subordinate sandstone. Some of the layers are quite fossil-rich (ammonites, shells etc.). At the corner to the Grønfjord, you find the lower Cretaceous, that is the youngest Mesozoic rocks in Svalbard (the upper Cretaceous, and thus unfortunately the C/T boundary, is missing due to a regional hiatus). Very conspicuous is the ‘Festningen Sandstone‘, a layer of very hard, quarzitic sandstone within the lower Cretaceous. As the other sediments in the Festningen section, it is standing in a vertical position and, due to its hardness, stands out like a wall in the landscape. Its northern elongation forms a small island which reminds one of a fortress, hence the name ‘Festningen’ (Norwegian: fortress). In the 1960s, footprints of Dinosaurs (Iguanodons) were found here, but the relevant rockwall has fallen into the sea since. New tracks are supposed to come to the light of day every once in a while, but I have never found any so far – if you see some, please let me know. On the island of Festningen itself, there is a little light house; there are geese and other birds breeding here as well as on the mainland nearby (keep your distance!!! For geological excursions, you should come outside the breeding season, preferably in August). East of Festningen, on the western side of the Grønfjord, you find the lower Tertiary sediments, which are similar to the geology around Longyearbyen. 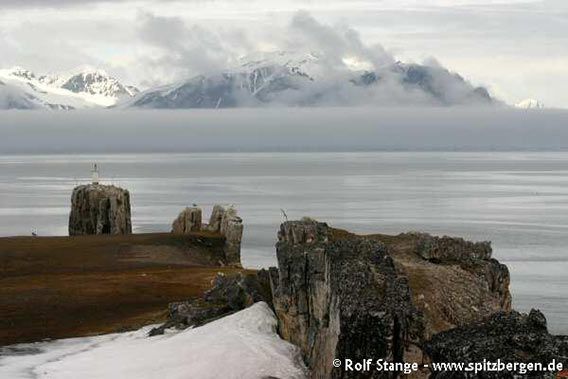 The Festningen-Sandstone at its type locality (which is Festningen).

All in all, the area offers a very nice cross section through the geology of Svalbard (not including magmatic basement rocks and the Old Red. Carboniferous is clastic, the evaporites of the Billefjord area are missing). If you are interested in geology and want to see a relative complete and easily accessible (well, relatively) section, then you should think about the Kapp Linné-Festningen area – but, as already mentioned, you should come after the breeding season. Middle or late August would be good. Additionally, the area has nice and interesting landscape and history to offer.

Landscape: You may find the area less spectacular than other places in Spitsbergen, as there are no glaciers near teh coast. But there is a lot to see, it is one of my favourite areas in Svalbard – I don’t know how many times I have walked up and down the coast between Kapp Linnè and Festningen, and I will surely do it again. The coast itself is mostly a steep cliff, about five metres high, with more or less flat tundra behind. Here, you can find nice frost-patterned ground and beach ridges. Especially interesting is the tundra between Linnéelva and Kapp Starostin, as there are dolines (sink holes) from underground carbonate solution, beach ridges and, if you go inland, a nice view over the lake Linnevatnet. A hike around the lake takes quite a couple of hours and requires crossing two rivers and some muddy and stony areas, but you can see nice stone stripes (frost patterned ground on sloping surfaces). A highlight is Festningen (see above), a hard sandstone layer standing like a wall in the landscape on the corner to the Grønfjord (again, stay away from breeding geese and other birds in the season). Walking is more difficult east of Kapp Starostin than west of it, as the tundra becomes wetter and there are some steeply incised little valleys. The river Linnéelva is usually relatively easy to cross if you try half-way between the coast and the lake.

Flora and Fauna: Well, in these regards there are more interesting sites in the Isfjord. The tundra is relatively barren, especially north of the lake Linnévatnet. There are foxes and reindeer. Hundreds of Common Eider ducks used to breed near the buildings of Isfjord Radio at Kapp Linne, even directly next to the doors. Since the station is not staffed anymore, foxes which did not dare to come close do so now and have spoiled the Eider population, unfortunately.

History: Remains from many different chapters of Svalbard’s history can be seen, although they are usually quite inconspicuous – don’t expect the British Museum, traces of the past are often quite subtle in Svalbard, but nevertheless interesting. The whalers used to have several stations in the Grønfjord in the 17th century, including one near Festningen. The Pomors have also used the area as hunting ground. A large Pomor hunting station was at the mouth of the river Linnéelva, some remains can still be seen (the inconspicuous foundations with pieces of bricks; the huts are younger). Also legendary Ivan Starostin used to live here, legend has it that he stayed for 32 years, mostly without returning to the mainland at all! He died here in 1826 and, appropriatly, he is buried in the area; a pile of stones on the ridge near Kapp Starostin (near the antenna) could be his grave.

Remains from the ‘gold-rush period’, during which minerals have been investigated and claims taken into possession for the purpose of mining, can be seen at Kapp Mineral just east of Kapp Linné, a mine entrance is still visible where lead and zinc ore was extracted in the early 1920s. At Kapp Linné, the station Isfjord Radio provided radio communication between the various settlements on Spitsbergen and the mainland of Norway. In later years, Isfjord Radio was connected to the settlements via antennas, which needed to be visible from both sides. The next one is standing at Kapp Starostin. The last remaining technical staff was removed from Isfjord Radio in 1999, today the station is not necessary anymore, since a glass fibre cable has been laid from Longyearbyen to the mainland. For some years, the buildings were still used as hotel Kapp Linné during the season (snow mobile season February – early May, boat season late June – early September); Gustav Halsvik was the good soul of the location, I can’t imagine the place without him. Unfortunately, he is not there anymore. The hotel is still used occasionally. The station area is now part of the cultural heritage of Spitsbergen, it will be interesting to see what will be done with it in the future.