The Arctic skua lives up to its name: it attacks other birds such as kittiwakes and seagulls in flight and chases away their prey. Eggs and chicks of other birds are also not safe from the Arctic skua. 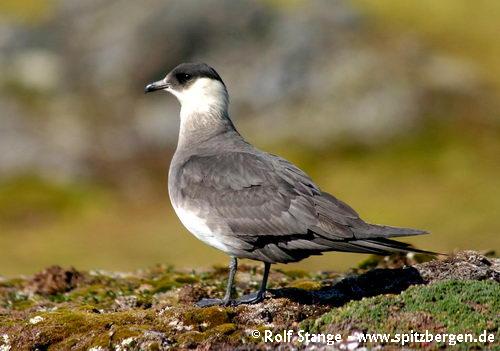 As well as the “normal”, contrasty plumage, there is a dark morph with completely dark feathers. The dark morph is rare in Svalbard.

Distribution / Migrations: The Arctic skua breeds everywhere in the Arctic and sub-Arctic. In Svalbard, it breeds in tundra areas anywhere in the archipelago, but is most common on the west and north coasts of Spitsbergen. During the winter the open sea is their preferred habitat, usually off west and southwest Africa.

Biology: Single pairs of the Arctic skua breed on rather flat tundra, often on a very shallow rise in the ground for a good overview. Arctic skuas come to the breeding areas in early June, often returning to the same nest. After egg-laying in early July, both parents incubate the eggs (one or two) for 26 days. Soon after hatching, the young bird(s) leave the nest together with the parents. The family stays together until the chick can fly after about five weeks. As the Latin name suggests, Arctic skuas do not like to look for food themselves, but prefer to chase other birds such as Kittiwakes or Brünich’s Guillemots in flight until they drop their prey. Occasionally, they may also steal eggs or chicks from other birds. In areas where rodents occur, these are another welcome food source for the Arctic skua. 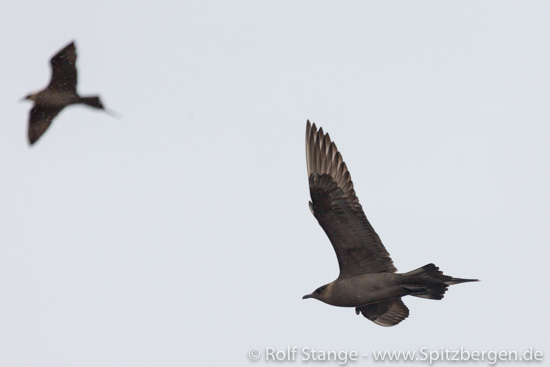 The Arctic skua ist the most common skua on Spitsbergen

Miscellaneous: The Arctic skua is by far the most abundant skua in Svalbard, with an estimated local population of about 1,000 breeding pairs, and it is a common sight on flat tundra. Because of its good camouflage, it can be difficult to see. If you approach close to a nest, one of the adults will pretend to be hurt to lure you away. If you see this, then move away quickly either where you came from, or you can also follow the bird as it will lead you away from the nest. If you approach even closer, then the bird will attack. If this happens, move quickly away from the nest. Do not stop to take any photographs.