Barnacle geese are probably the best researched geese in the world! At the end of the 1940s there were only a few hundred Barnacle geese on Spitsbergen. However, the stock has since recovered well. 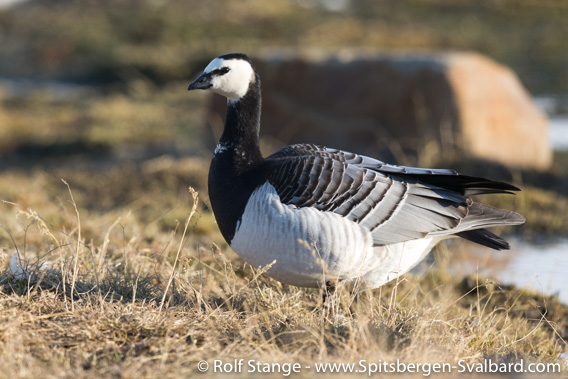 Occasionally, leucistic Barnacle geese are seen, which are largely white due to a pigmentary abnormality. These geese are, however, not albinos. 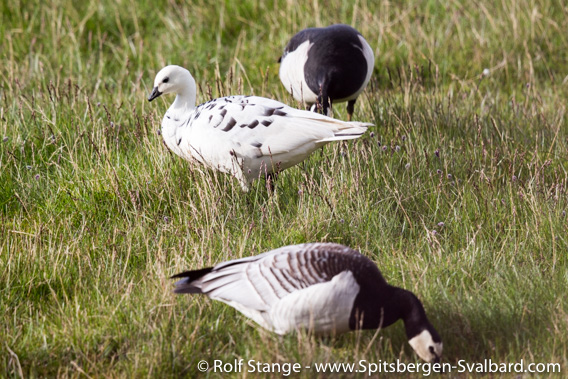 Distribution / Migrations: Barnacle geese breed in three different areas: Northeast Greenland, Svalbard and northwestern Russia down to the Baltic sea. Birds from Svalbard spend the winter in northern England and southern Scotland, using Bear Island (Bjørnøya) as a resting place on the way down south and the west coast of Norway during the spring migration. Barnacle geese from Greenland winter in Iceland and western Scotland, and those from Russia on the German and Dutch North Sea coast. They spend a couple of days after the spring migration mainly around Vårsolbukta in Bellsund and the Hornsund area, before they move on to their breeding areas. 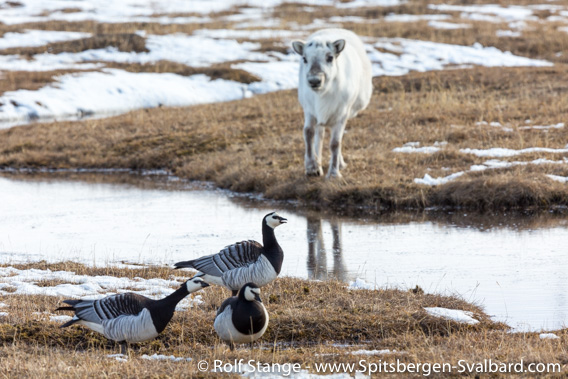 Barnacle geese in Adventdalen in late May, after the spring migration.

The most important breeding areas in Svalbard are the west coast of Spitsbergen and Tusenøyane.

Biology: Rock terraces on top of cliffs and small islands in lakes or near the coast are their preferred breeding habitat, where they are largely undisturbed by foxes. They lay four or five eggs on which the female will sit for 24-25 days. The male will stay around and defend the nest against foxes or other predators. As soon as the chicks have hatched, the goose family will leave the nest and spend the following weeks on rich tundra near a lake or the coast, so that they can retreat to the water in case of any danger. 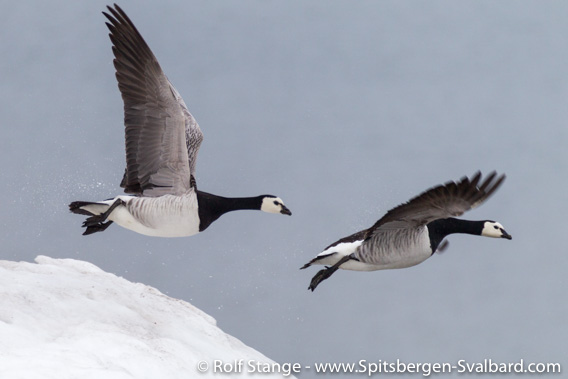 Barnacle geese, flying off after being disturbed by an arctic fox.

This time is also the moulting period of the adult birds, so the whole family is unable to fly for some weeks until the young geese are ready for take-off at an age of 40-45 days. After moulting, Barnacle geese will gather in large numbers in areas with rich vegetation, where they will build up energy for the long flight to the wintering grounds. The family will stay together until the next spring. Barnacle geese are vegetarians and feed on plants and mosses. 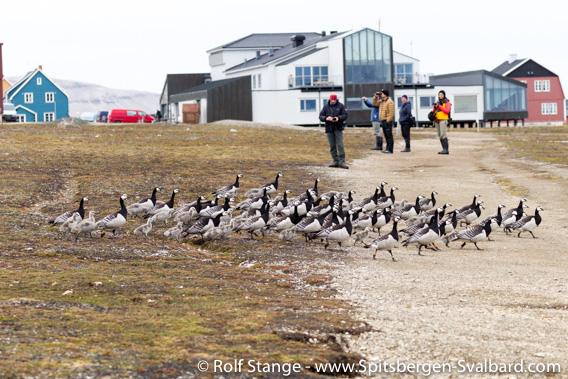 Miscellaneous: Barnacle geese that walk through the settlement of Ny Ålesund without hesitation, are much less nervous about human presence than Pink-footed geese which have been hunted for a long time in Spitsbergen. Barnacle geese were driven near to extinction in Svalbard, but have recovered well, and limited hunting may be re-opened in the future. The overall population is stable or even growing slowly, with an estimated 25,000-30,000 birds in the year 2000. The strong concentration of large numbers during certain times of their migration makes Barnacle geese vulnerable to disturbances.