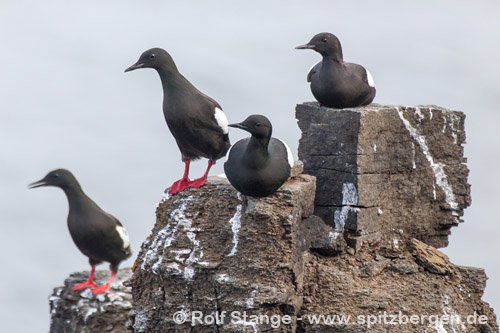 Description: With a length of 34 cm and a weight of 350-450 g, the Black guillemot is a medium-sized auk, somewhere between Brünich’s guillemots and Little auks in size. They are completely black, apart from a characteristic white, oval spot on the upper wings, which can easily be seen when the bird is sitting on the water. Legs and the inside of the beak are red. The sexes look alike.

Distribution/ Migrations: The Black guillemot has a circumpolar distribution in the high- and sub-Arctic. The Svalbard population does not migrate far, but spends the winter near the ice edge in regional waters.

Biology: While searching for food, breeding Black guillemots stay closer to the coast than other auks. They find their food, which consists of small fish and crustaceans, near the surface. Compared to Common and Brünich’s guillemots, the Black guillemots are rather unsocial birds, as they breed in small, loose colonies in rock crevices, under large stones and on steep cliffs. Colonies larger than 100 breeding pairs are the exception. It is the only auk that normally lays two eggs, which both parents incubate for about four weeks. The chicks can fly after 30 to 40 days and are then immediately independent.

Miscellaneous: The population in Svalbard numbers around 20,000 breeding pairs and they are a common sight. The Black guillemot is hunted to a limited degree in Spitsbergen. When sitting on the water, it can dive quickly and will usually do so at exactly the moment when you press the trigger of your camera.