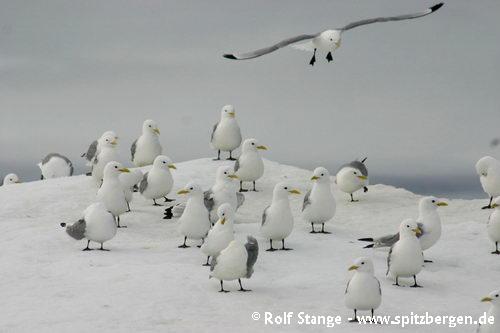 Distribution / Migrations: Kittiwakes are common everywhere in the Arctic and sub-Arctic. In Svalbard, there are dense colonies on steep rock cliffs in all parts of the archipelago, the largest being on Hopen and Bjørnøya. There are some breeding sites of a different sort on windowsills in Barentsburg and Pyramiden. The population in Svalbard is estimated at about 270,000 breeding pairs (one third of these being on Bjørnøya). They spend the winter on the open sea, not too far from the breeding areas.

Biology: Colonies are situated on steep cliffs where they can breed without being disturbed by Arctic foxes or Polar bears. Kittiwakes feed on a wide range of food, mainly crustaceans and fish, but they also follow fishing vessels. Their eggs and chicks and even adult Kittiwakes are preyed on by Arctic foxes, Glaucous gulls and the Great skua. In contrast to other cliff breeders, Kittiwakes build a nest of plant material on narrow rock ledges. Egg-laying takes place in the first half of June. The female lays two eggs (three in the sub-Arctic), both parents sit for 27 days. Usually, one chick will hatch one or two days before the second one, and it is often only the older one that will survive.

Miscellaneous: A slight increase of the Svalbard population since the mid-1990s is, for unknown reasons (bad food availability?) followed by a minor decrease. The population is however generally healthy and Kittiwakes are among the most commonly seen birds in Spitsbergen, although in 2018, the kittiwake was classified as “endangered” on the Red List of endangered species because its European populations have shrunk by 40% since the 1980s.