The Brünnich’s guillemot looks like a flying Adélie penguin. It is one of the most common seabird species on Spitsbergen and occupies 142 colonies on the archipelago. 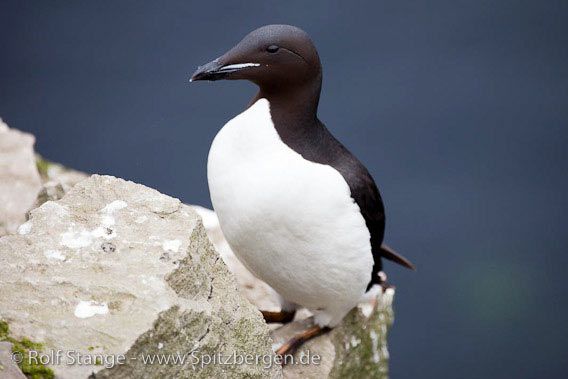 The Brünich’s guillemot can dive to a depth between 50 and 200 metres.Bjørnøya (Bear Island).

Description: The Brünnich’s guillemot have a black back and head and white belly. They are 41 cm tall and weigh 700-1,200 g. The high-arctic Brünich’s guillemot is very similar to its close sub-arctic relative, the Common guillemot, which makes these two difficult to distinguish. The Brünich’s guillemot has a shorter, thicker beak with a white stripe from the root almost to the tip on the lower edge of the upper mandible.

Distribution/Migrations: Brünich’s guillemots are widely spread throughout the high Arctic. They appear in smaller numbers in northern Norway, with more substantial colonies in northern Iceland, Greenland and Jan Mayen and in very large numbers in Svalbard and Franz Josef Land. The population in Svalbard is estimated at around 850,000 breeding pairs, the largest colonies being in Hinlopen Strait (Alkefjellet), on the southeastern coast of Spitsbergen (Kovalskifjella, Stellingfjellet), on Hopen and on Bjørnøya, but there are small and medium-sized colonies everywhere in the archipelago. Brünich’s guillemots from Svalbard winter in the open sea around Iceland, southern Greenland and Newfoundland. Some colonies make the impression of being quite stable, but at 9 key observation sites on Bjørnøya and in Spitsbergen, numbers have gone down by as much as 4 % annually between 1987 and 2010, which was the reason for including the Brünich’s guillemot on the Norwegian Red List in the category “near threatened” in 2010.

Biology: Brünich’s guillemots nest on steep rock cliffs on narrow ledges, out of reach of Arctic foxes and Polar bears. Upon arrival of the birds in April or May, the nesting places are still inaccessible because of ice and snow. The female will lay one pear-shaped egg in late May or early June. Both parents sit for 32 days and feed the chick for three weeks until it has to jump down from the cliff, like young Common guillemots (see above).

Miscellaneous: Brünich’s guillemots breeding in Spitsbergen may end up in a cooking pot in Greenland or Newfoundland. Despite pressure from hunting in the wintering areas, they do not seem to mind human visitors too much near their breeding place, if you move carefully and quietly. Guano-proof clothing is generally recommended near birdcliffs!

The Brünich’s guillemot was not affected by the 1987 population collapse of the Common guillemot because of its more varied diet.