The Glaucous gull is by far the largest of the common gulls that breed regularly on Spitsbergen. It is about as big as the great black-backed gull, which is rare in Svalbard. 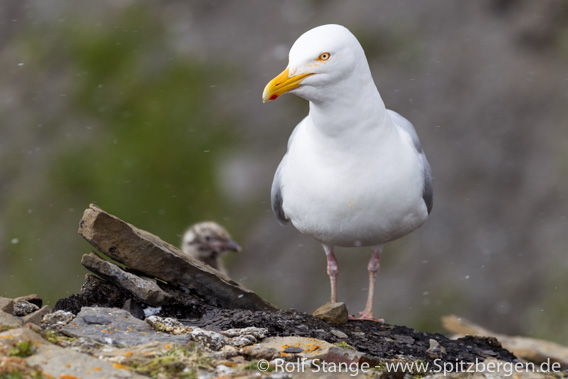 Description: The Glaucous gull is by far the largest of the common gulls of Spitsbergen (65-78 cm, 1.3-2.2 kg in weight). It is not possible to distinguish the sexes by eye. The plumage is largely white, except for the light-grey upper wings. The size, and the absence of black wingtips, makes it easy to distinguish from Kittiwakes.

Distribution / Migrations: Glaucous gulls breed in all parts of the high Arctic and spend the winter in the open sea not too far from the breeding areas, or occasionally in coastal waters. They breed everywhere in Svalbard in seabird colonies.

Biology: In Svalbard, where rodents are absent, the Glaucous gull occupies the role of bird of prey. It takes almost anything it can swallow: Fish, mussels, crustaceans, eggs, chicks and even adult Kittiwakes, Brünich’s guillemots and Little auks. It likes to breed in colonies of those species, much to their disgust, but often without any other breeding Glaucous gulls in the same area, unless food availability is very good. Glaucous gulls build a nest of grass, mosses and seaweed, usually in an elevated position. Both parents will incubate the two or three eggs for four weeks. For breeding, Glaucous gulls often return to the place where they were born. Once they have found a suitable nesting site, they will keep using it for several seasons.

Miscellaneous: There are several thousand breeding pairs in Svalbard, although exact counts are lacking. It is believed currently that the population is declining slightly. Being at the top of the food chain, Glaucous gulls accumulate high concentrations of environmental toxins in their fat tissue and liver. 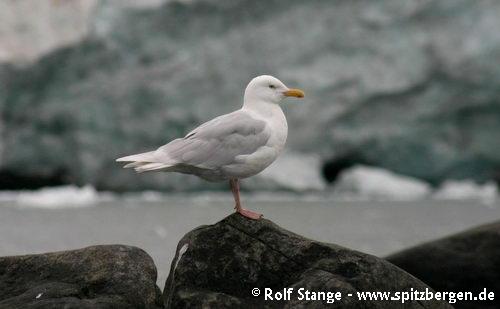 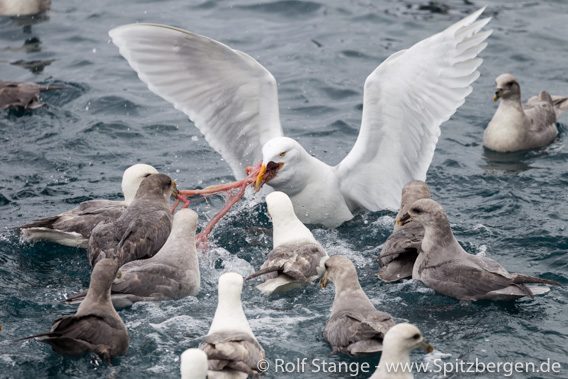