A Grey phalarope rotating in flat water, may be a strange sight. But this funny behavior is foraging: By turning fast in the water prey is whirled up from the water bottom. Also the rather unusual gender roles make the Grey phalarope interesting. 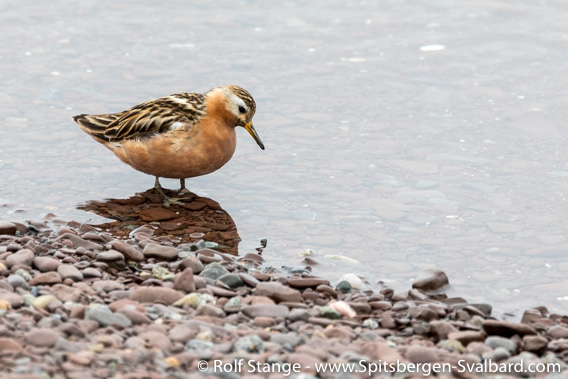 Description: The breeding plumage of the Grey phalarope is rusty red, apart from the more camouflaged upper sides of the wings and head and a white spot around the eyes. It is a small bird (length 20 cm, weight 40-75 g). There are some unusual differences between the sexes: The female is not only slightly larger, but also has the more contrast-rich plumage, unlike the normal situation with most birds. This has to do with its unusual breeding behaviour (see below). 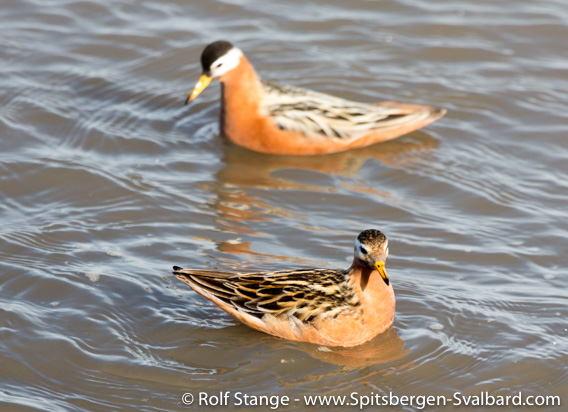 Distribution / Migrations: The Grey phalarope occurs in the high Arctic everywhere around the North Pole. In Svalbard, it breeds everywhere near the coast, but is most abundant on the west coast (Isfjord, Bellsund) of Spitsbergen, in Tusenøyane and on Bjørnøya. In winter, Grey phalaropes like it warm and migrate as far as the Tropics. Those coming from Svalbard, probably winter near the coast of West Africa. They come back to the breeding areas in early or mid June and stay until late July or early August. The females leave first, and the males stay until breeding is completed. 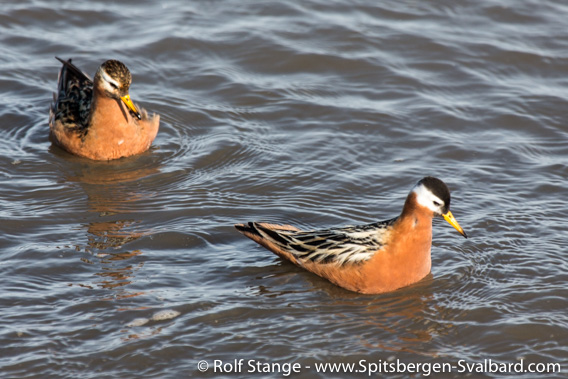 Biology: Grey phalaropes breed in solitary pairs or loose colonies on flat, moist tundra with rich vegetation, often near small ponds. Often, they return to the same nest for several years. They find their food, mostly insects and small crustaceans, in the tundra in small ponds, or on the coast. Sometimes they are seen sitting on shallow water, rotating quickly to whirl up prey.
Compared to many other birds, Grey phalaropes have swopped roles for breeding. Laying the four eggs in mid June is still the female’s business, but then the male takes over for incubating (18-20 days) and taking care of the offspring (16-18 days). This enables the female to breed again with a different male. Once the second set of eggs is laid, the female will move south. 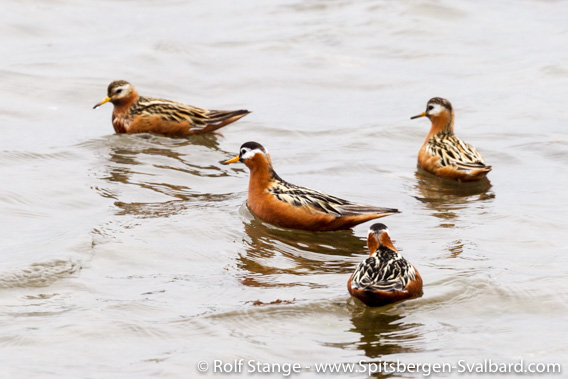 Grey phalaropes looking for food in shallow water next to the shore.

Miscellaneous: The wintering plumage is grey (hence the name) and rather unsightly, hence the common desire of many birdwatchers, who have seen this bird in Europe during the winter, to see it in the Arctic in summer plumage. The breeding behaviour also makes this bird quite interesting. With some luck and in the right place, you may see several individuals together on the beach where they can actually be quite approachable, if you are careful.