Chances to see Harbour seals lying on rocks are better during low water, since they tend to search for food during high tide. The size of the local population is estimated to be around 1,000 animals. 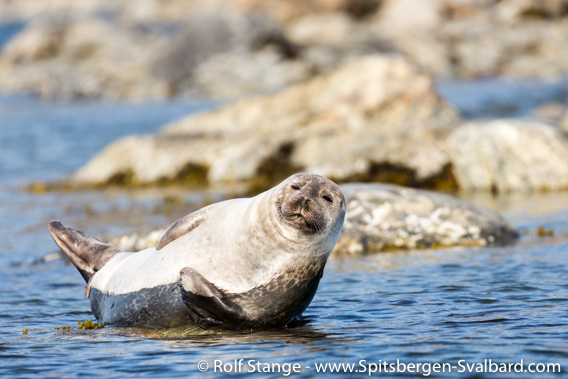 Description: With a length of about 1.5 metres and a weight of a good 100 kg, Harbour seals are slightly larger than Ringed seals. The colouration of their fur varies from almost black to dark grey and brown, with patterns that can be similar to those of Ringed seals. Already at birth, their size approaches one metre and the fur also resembles that of adults. Main features to distinguish Harbour seals from Ringed seals are the location and situation of the observation: You will find Harbour seals, if at all, only on the west coast of Spitsbergen and you will rarely see one only, as they tend to stay in groups. Also, if you see any seals lying on rocks, then they should be Harbour seals, as other seals in Spitsbergen rarely show this behaviour. In contrast to other seals, Harbour seals usually do not rest on ice floes unless the shore is not accessible.

Distribution / Migration: Generally, Harbour seals are amongst the seal species with the widest range, but they are more at home in temperate and sub-arctic areas. In central Europe, they are well-known from the North Sea coast. The world’s northernmost occurrence is the one and only colony at Spitsbergen, which is on the northeast coast of Prins Karls Forland. They spend the whole year in the area, but can swim quite far. Thus, you may also see them in Isfjord, Kongsfjord or at the northwestern corner of Spitsbergen, near the shores of Amsterdamøya and Danskøya. The Spitsbergen population is possibly a relict dating back to a period with milder climate several thousand years ago.

Harbour seals like to rest on rocks close to the shore 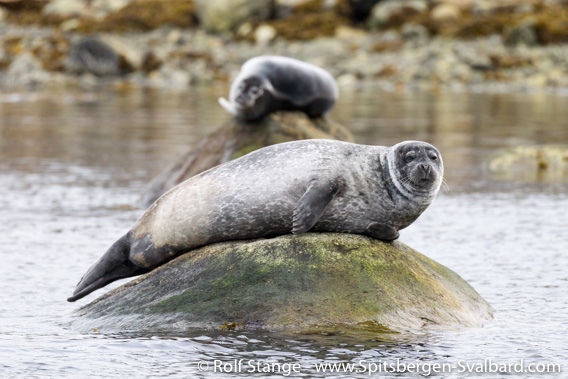 Biology: In Spitsbergen, Harbour seal pups are born in early to mid June. The offspring sees the light of day for the first time in shallow water and is immediately able to swim. The young seal will live for three to four weeks on its mother’s milk, until it has increased its body weight from ten or twelve to 25-30 kg and then starts to find its own food. As soon as the young become independent, the mating season begins, but pregnancy is delayed by a good two months, until September or October. Harbour seals moult in late August to early September and will then build up a thick fat layer for the winter, feeding on almost anything they find in the water that is small enough for them to eat, such as fish, jellyfish and crustaceans. Females and males tend to go their separate ways outside the mating and moulting seasons.

Their main enemies are Orcas, Greenland sharks and, exceptionally, those Walrus who have abnormal diet requirements. Polar bears rarely take Harbour seals, as their distribution ranges overlap only marginally.

The life expectancy of Harbour seals in Svalbard is, for reasons not yet known, significantly shorter compared to their relatives further south; the oldest one found was 22 years old (normally up to 35 years). Recent studies have confirmed Greenland sharks to be important predators in Spitsbergen, a fact that is likely to explain the reduced life exptectancy. The relatively slow-swimming Greenland shark probably catches the seal while it is sleeping.

Miscellaneous:Hunting, losses as bycatch in fishing nets and pollution including oil spills have put pressure on Harbour seal populations in many areas. While the Spitsbergen population is assumed to have a normal size, it is on the Norwegian red list and thus totally protected. 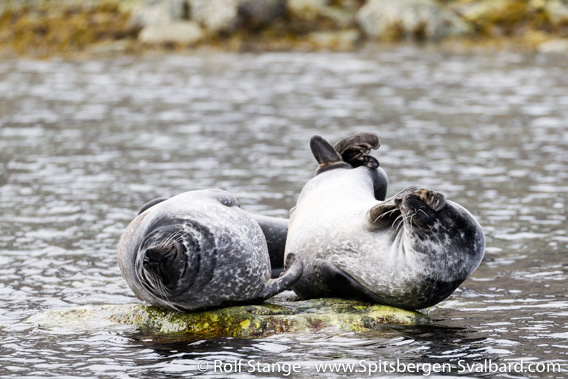 Spitsbergen’s Harbour seals don’t become as old as their relatives on the mainland.