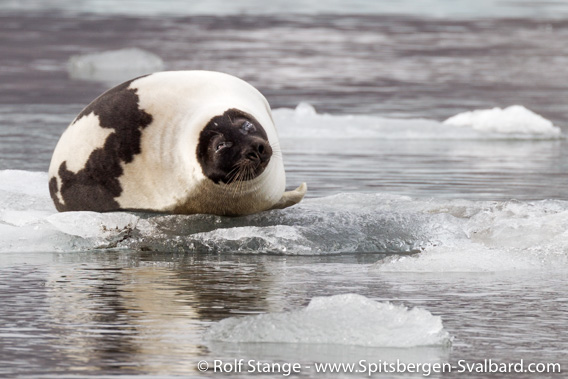 Description: Harp seals are relatively small seals, measuring 1.70 to 1.80 metres and weighing 120 to 140 kg. The fur pattern of the adults is mainly silverish grey, but has a large, dark spot across the back that looks vaguely similar to a saddle, hence the name. This pattern is more strongly pronounced with males than femailes. The head is also partly black. 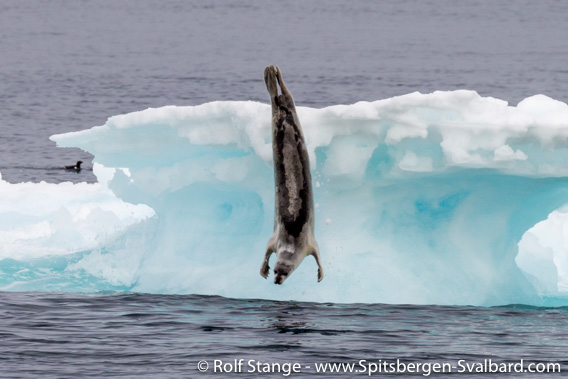 Harp seal conveniently displaying the pattern on the back.

Harp seals are easily identified by their behaviour: in Spitsbergen waters, they are mostly seen in larger groups near the ice edge or within drift ice, often swimming in a very lively and playful way. Sightings in fjords are rare. 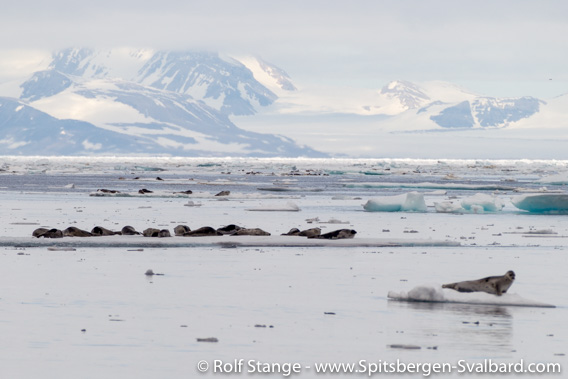 Groups of Harp seals spread out on loose drift ice off the southwest coast of Spitsbergen, late June.

Distribution / Migration: Harp seals can be found in the Arctic from Newfoundland to West and East Greenland and into the Barents sea, mostly in the vicinity of drift ice.

Biology: Harp seals dive down to 200 metres and feed on a variety of fish and crustaceans. Mating occurs in January and February, but the fertilized egg is implanted after a delay of about 4 months in May or June. The pup, approximately 85 cm large, is born next January or February. It suckles for only about 12 days, but gains about 2 kg weight per day during this period. It will then spend another 2 weeks on the ice, until its fur, originally white, has changed to a pattern with dark spots. The fur deve- lops the characteristic „saddle“ pattern of the adults only after 7 (males) or 12 years (females). Polar bears, Greenland sharks and Orcas are the Harp seal’s worst enemy; if they manage to escape those, then they may live for up to 35 years. 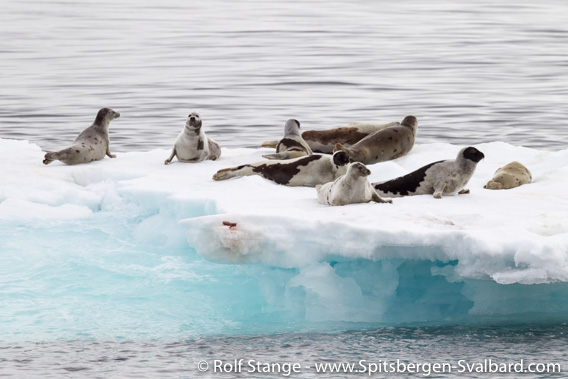 Miscellaneous: The global Harp seal population, once numbering many millions, has been reduced dramatically throughout centuries of industrial hunting, but is still estimated around 7 million. Several 100,000 are still taken each year, most of them in Canada.