The male King eider is a beautiful, colorful bird that many ornithologists visiting Svalbard wish to see. However, it takes a bit of luck to see them. 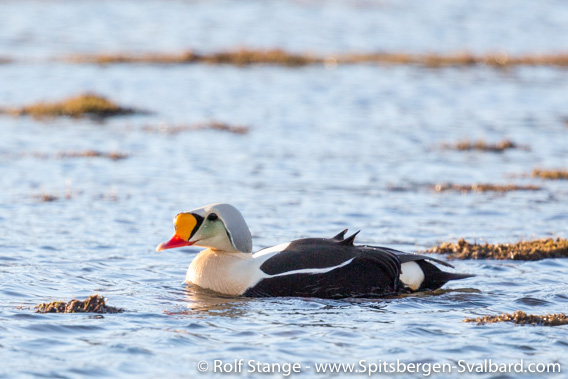 Description: With a length of 55 cm and a weight of 1.5-1.8 kg, the King eider is slightly smaller than the Common eider. The difference between the females of both species is confined to some small details. Distinguishing the males is much easier: The male King eider has a grey head, a bulging forehead and a read beak which is a real eye-catcher. Another difference is the black back (Common eider: white back), which can be seen even from a distance. 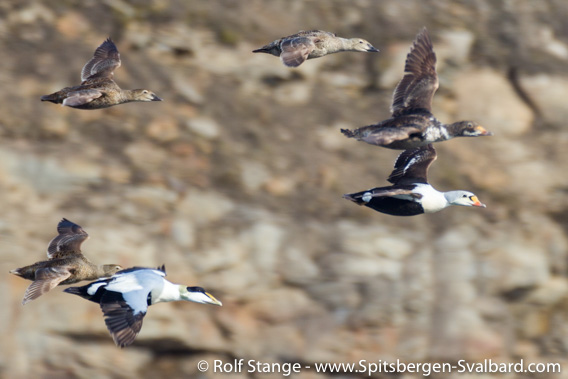 Distribution/Migrations: King eiders have a circumpolar distribution and are largely confined to arctic latitudes, even more so than the Common eider. In Svalbard, the King eider is generally rare, but most common on the central west coast and at Reinsdyrflya and nearby islands (Andøyane). So far as is known, they spend the winter on the coast of northern Norway. 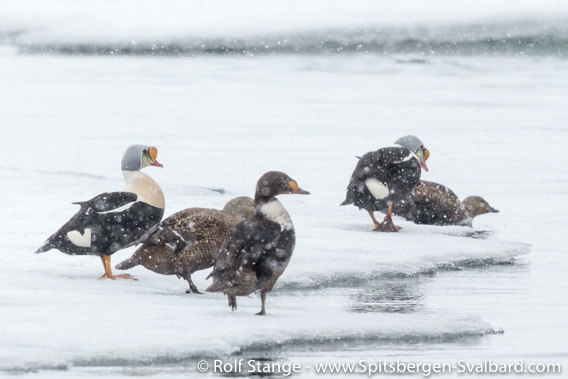 Biology: The preferred habitat is flat tundra with small freshwater ponds. King eiders live on a range of invertebrates and crustaceans which they find on the bottom near the shoreline. They do not breed in colonies, but form small groups after the breeding period. They come back to the breeding areas slightly later than the Common eiders and lay four to six eggs, which are incubated by the female for 22 to 24 days. The male leaves the nest shortly after egg laying. The female leaves together with the chicks before these can fly, to join other females on the water. 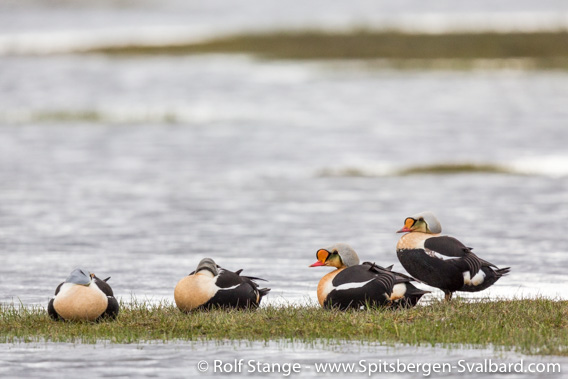 Miscellaneous: The male King eider is a beautifully coloured bird that is high on the wish list of many birdwatchers who come to Spitsbergen. It needs a bit of luck to see them. Check carefully any large flocks of Common eiders, as a King eider or two may occasionally mix in with them. King eiders are usually quite shy in Spitsbergen and accordingly difficult to photograph. You will get the best chances for good observations and photography if you take a trip by car on the road into Adventdalen in June.

The total population of King eiders in Svalbard may be between 1200-2500 breeding pairs.