How many Long-tailed ducks breed on Spitsbergen is not exactly known. But you will see this pretty sea duck less often than, for example, an eider duck. 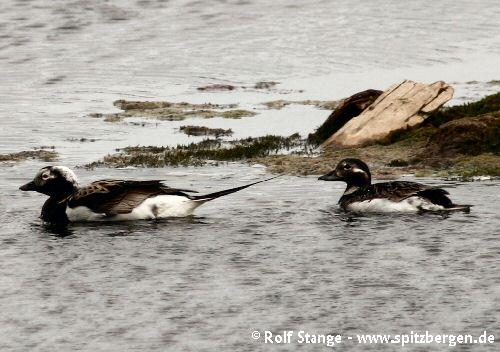 Description: Relatively large duck with marked sexual dimorphism: Due to their long tail, which alone is a good 12 cm long, males reach 55 cm in length, females only 40 cm. The weight is for both 650-900 g. Both have a contrast-rich plumage. Most conspicuous are the white ring around the neck of the female and the white side of the head of the male.

Long-tailed ducks have a complicated moulting pattern: They moult three times per year; before breeding, in late summer and in late autumn. In Spitsbergen, they have their breeding plumage.

Distribution/Migrations: Long-tailed ducks occur in the sub- and high-Arctic around the pole and live both in mountain areas and in flat tundra; in Spitsbergen mainly in lowlands with small lakes near the west coast. Long-tailed ducks from Spitsbergen may winter near the ice edge or at open sea in regional waters; Northern European birds leave their breeding areas in October or even November to spend the winter in northern Norway or the northern Baltic sea. 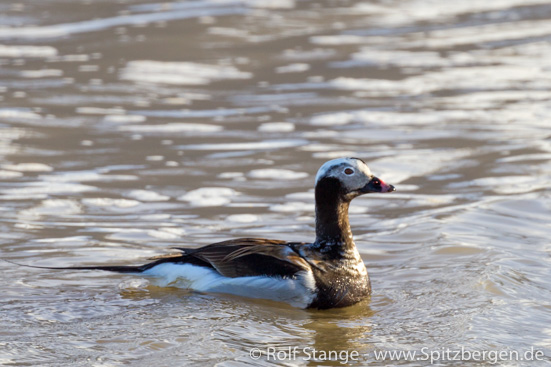 Biology: Long-tailed ducks have a mixed diet of some plants, but mainly mussels, larvae and little crustaceans. They nest on dry patches of tundra near small ponds. Males tend to return to the same nest each year and like to keep some distance from their nearest neighbour. As soon as the snow-melt allows, normally in late June, the females lay five to nine eggs and sit for about four weeks, while the males gather at the coast in groups for moulting. The female stays with her chicks near a lake or on the coast, until they can fly after five to six weeks.

Miscellaneous: Long-tailed ducks are skilled flyers and can reach 100 km/h. The size of the Svalbard population is not exactly known, but it is certainly much less common than the Common eider duck. The ponds in Ny Ålesund offer good chances to see Long-tailed ducks. When disturbed, the females will remain on the nest for as long as possible, but are under immense stress at the same time.