The view of a Northern fulmar that glides elegantly over breaking waves, is an impressive and beautiful image of the adaptation of wildlife to a harsh environment. 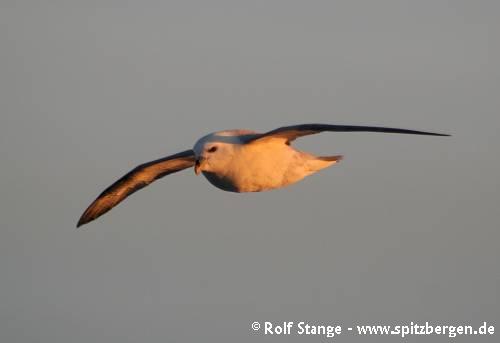 Description: Length 45-53 cm, 650-1,000 g in weight. The streamlined body is dark grey without any significant contrast, unlike gulls. There are different colour variations (morphs) of the fulmar; the dark-grey one is common in Spitsbergen, and the lighter one is common further south, for example in Iceland. In flight they are easily recognised by their stiff wings and their very elegant, perfectly controlled long glides, often just above the crests of waves; a behaviour not shown by gulls. The small tube on top of the beak makes them unmistakable from short range.

Distribution / Migrations: Northern fulmars have a wide range from Newfoundland and northern France, up to Spitsbergen where they breed almost everywhere on steep cliffs; they are not breeding on the remote, high arctic islands in the far northeast. Outside the breeding season, they are truly pelagic, which means that they will stay on the high seas at all times and not come to land. They spend most of the year around Spitsbergen except for the darkest months, when they move a little bit south towards the open Atlantic. The main breeding areas in Svalbard are on the west coast of Spitsbergen and Bjørnøya.

Biology: Northern fulmars breed in loose colonies on steep cliffs. They live off squid, small fish and plankton and find their prey close to the surface on the open sea and in drift ice, covering huge distances on their search for food.

Belonging to the tubenoses, they are closely related to the Albatrosses of the southern hemisphere and, just like these, they have a slow reproduction rate but a high life expectancy. They can reach ages of more than 60 years. In late May, they lay a single egg into a very simple nest or even directly on rocks. Both parents sit for about 50 days. Adults and chick can defend the nest effectively by spitting very smelly and sticky oil, and they can aim quite well. 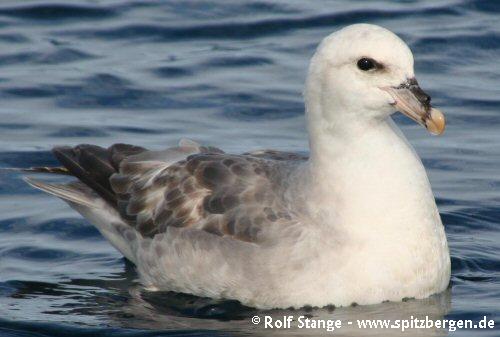 Miscellaneous: Northern fulmars are not related to gulls but belong to the tubenoses, most of which live in the southern hemisphere. The size of the population in Svalbard is not known, but they are among the most commonly seen birds in the area. They are always around ships, often in large numbers.

Nevertheless, the Northern fulmar is in danger: 97% of all individuals have plastic waste in their stomach (2012)! Since the stomach is filled with plastic, they no longer feel hungry and die of starvation with full tummy. Plastic parts can also cause serious injuries in the inner organs of the bird. The Northern fulmar has become a sad indicator of the pollution of the North Sea and the Atlantic during the last few years.