Pink-footed geese like to return to the same breeding grounds every year. Their stock grows from year to year. On Svalbard they are usually very shy, but they are easy to observe close to and even in Longyearbyen when they have arrived after their spring migration, in late May / early June. 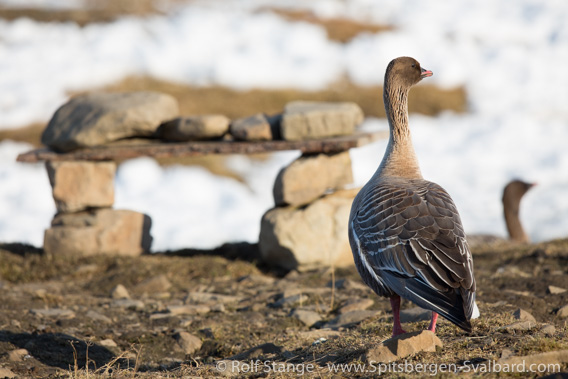 Description: The Pink-footed goose is a medium-sized goose (length 60-75 cm, weight 2.2-3.5 kg) with a relatively short neck, largely black beak and pink legs. Resembling the Bean goose (Anser fabalis) or the Greylag goose (Anser anser) to some degree, its plumage appears to be less rich in contrast compared to that of the Barnacle goose.

Distribution / Migrations: Pink-footed geese are high arctic birds that breed in Iceland, East Greenland and Svalbard, where they feel at home on the whole archipelago, particularly the western parts. They spend the winter near the coasts of the North Sea and use the island Andøya in northern Norway as an important resting place during their migration. When they arrive in Svalbard in mid-May, it is some days before they continue to the actual breeding areas. Adventdalen is an important resting site for the first days after the spring migration, and other areas with high densities of Pink-footed geese include Sassendalen, Colesdalen, Reindalen, Nordenskiöldkysten (the west coast between Isfjord and Bellsund), the west coast north of Isfjord (Daudmannsøyra) and southern Dickson Land. 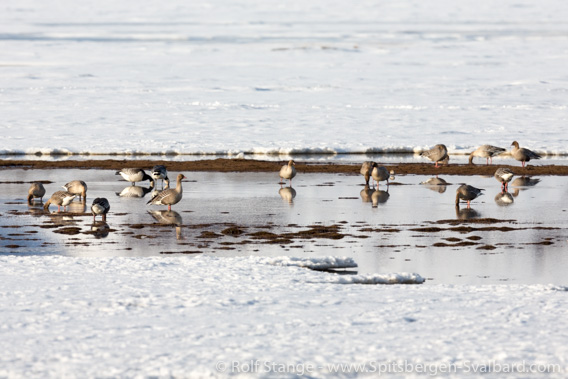 Pink-footed geese in Adventdalen after their spring migration, late May.

Biology: Leaves and buds are on the menu of Pink-footed geese. They arrive in the breeding areas in mid or late May and breed individually or in small colonies on the tundra near cliffs. In early June, the female will lay two to five, exceptionally even seven eggs and sit for almost four weeks. The male does not directly take part, but will guard the nest and defend it if necessary. 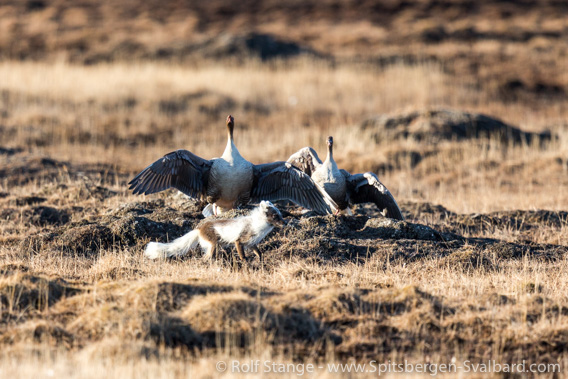 Pink-footed geese guarding their nest against an arctic fox.

The young birds leave the nest quickly and will have learnt to fly at an age of two months. Moulting of the adults takes place in July. During moulting, they cannot fly and will form larger flocks for safety, until they fly back south in September. The family will stay together until the next spring migration.

Miscellaneous: The Pink-footed goose is the most numerous goose in Svalbard, but is hunted both there and in the wintering areas and is thus quite shy; they may leave the nest when disturbed even from a distance of more than a kilometre! Exposed eggs or chicks are likely to be taken by predators such as Glaucous gulls or Arctic foxes; Pink-footed geese are at higher risk than other geese in Svalbard due to their low threshold against disturbance. Be as careful as possible in sensitive areas (see above) at relevant times or try to avoid these areas altogether. Keep your distance from nests and moulting birds. Resist the desire to approach to take photos. You can see easily them in large numbers next to the road in and near Longyearbyen in late May. 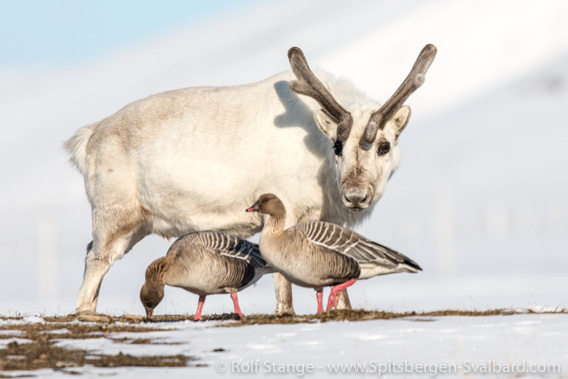 Peaceful life in the arctic tundra: Spitsbergen-reindeer and pink-footed geese.

The population has increased significantly from about 20,000 in the 1970s to 60,000 in 2007 and this trend will probably continue, especially if temperatures keep rising due to climatic changes. Pink-footed geese could then occur in higher numbers in areas along the west coast of Spitsbergen and the tundra areas of southwestern Edgeøya.