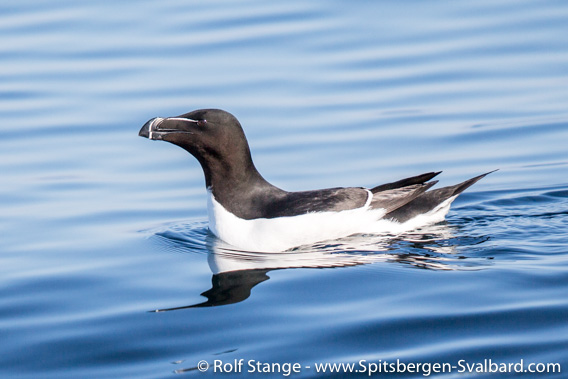 Description: The Razorbill is very similar to the Brünich’s guillemot and Common guillemot, but the black part of the plumage is even darker. The main distinctive feature is the strong, square-shaped beak with a simple pattern of white stripes. The sexes look the same. 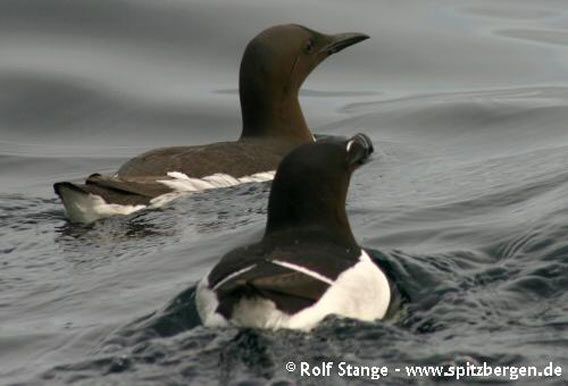 Razorbill (front) and Common guilllemot, Iceland.
The darker plumage and the stronger beak are visible.

Distribution / Migrations: Razorbills are subarctic auks rather than high arctic birds. In Svalbard, they occur in small numbers only on the west coast, a few breeding pairs have been recorded in Krossfjord and in Bellsund at Midterhuken. The largest breeding population in Svalbard is on Bjørnøya. As far as known, these birds winter at sea close to the coast of southern Norway.

Biology: The breeding behaviour is very similar to that of the Razorbill’s close relative, the Common guillemot. One egg is laid in May on a small rock ledge on steep cliffs, safe from the arctic fox, one of their main predators. After the breeding period of 35 days, it takes another 3 weeks until the chick is large enough to leave the nest. This is the time when both parents will moult, so the whole family is flightless for a while.

Miscellaneous: In Svalbard, the Razorbill is so rare that it is actually almost a curiousity.