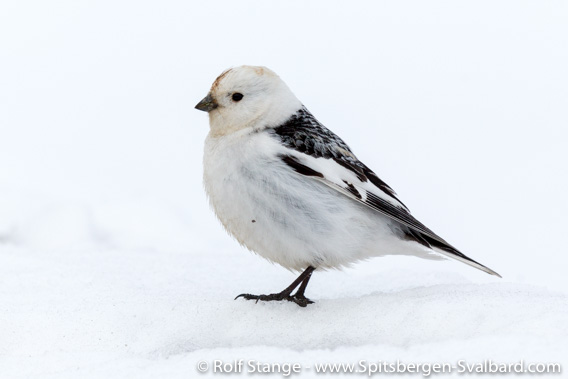 Snow bunting. End of May, Longyearbyen.

Description: Snow buntings (length 16-17 cm, weight 25-40 g) are smaller than Blackbirds and have a contrast-rich plumage with white belly, pale head and brownish-spotted wings and backs. The male has a completely white head, is largely black and white and thus more contrast-rich than the female. Snow buntings are not only the most colourful birds of their small size in Spitsbergen, but also the only singing bird in the high Arctic. 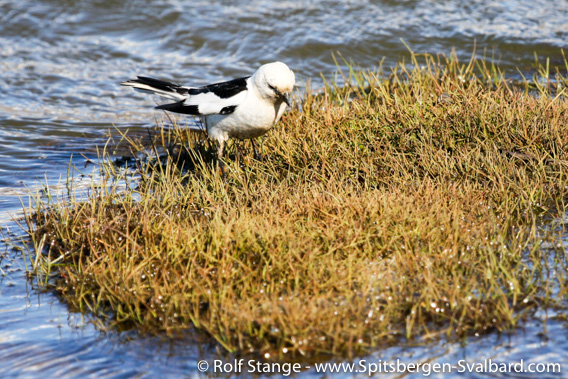 Distribution / Migrations: The Snow bunting has a circumpolar distribution in the Arctic and spends the winter in temperate latitudes. In Svalbard, it can be seen everywhere from late March or April to late August or even September. These birds migrate to the White Sea area in northern Russia or to the steppe north of the Caspian Sea or Kazakhstan.

Biology: Snow buntings feed on seeds and, to a lesser extent, insects. They are not too particular with regards to their breeding habitat, as long as the nearest neighbour is not too close. Nests may be anywhere, in lush tundra areas, near large seabird colonies or on thinly vegetated mountain slopes near the coast or far inland. 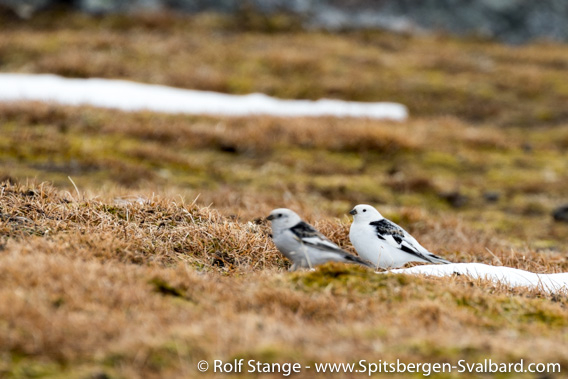 Pair of Snow buntings. Male to the left, female to the right. End of May, Alhornet.

The small, well isolated nest is usually well hidden. Upon arrival, they may build a small cave in the snow for temporary protection from severe weather. Shortly after arrival in the breeding areas, the male will establish a territory and attract a female with its beautiful voice. The female will lay four to seven eggs in late May or early June and sit for 12 to 14 days. The male does not take part in this, but assists while the chick needs food for 12 to 14 days after hatching. 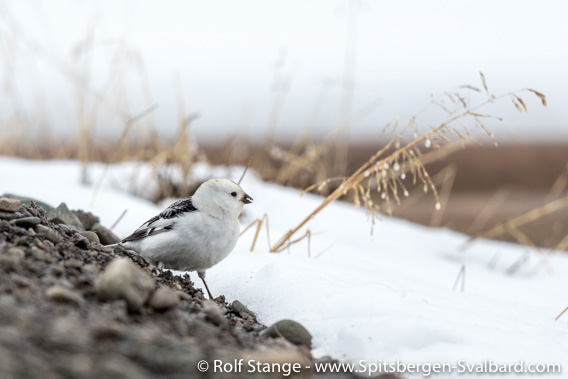 Miscellaneous: The exact size of the breeding population in Svalbard is not known, but it will be variable around several thousand breeding pairs. There is no evidence for a long-term increase or decrease of the regional population. Snow buntings are a common sight. Their melodic voice is a welcome sound in the tundra, announcing the end of the winter.