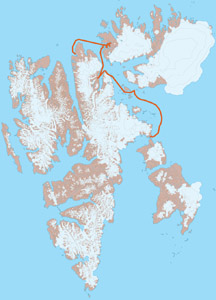 Then the wind came back again, so our crossing of Hinlopen Strait towards Nordaustland turned out to be another bumpy ride. It should remain windy, but Murchisonfjord, which almost always provides shelter somewhere between its many islets and peninsulas, did not fail this time either, so we got a good, long hike in the polar desert of Nordaustland, in the vicinity of the inland ice – seemingly empty, yet so detail-rich and colourful landscape of great beauty.
Another bumpy ride across Hinlopen took us to Lomfjord, where we made another lovely hike, followed by some impressive wildlife observations, seabirds at Alkefjellet first and we found walrusses later on one of the islands.

Then it became interesting (not that it had been boring before). Of course we had been following the ice situation, which had obviously started to get more and more loose to our surprise. The way to and through Heleysund was said to be open now, and this should be the needle eye.

There was still quite a bit of ice in southern Hinlopen Strait, so the southwestern part of Nordaustland and its ice caps were not accessible, but the ice gave us a stunning day as we cruised through it towards Heleysund. Which itself provided one of the most exciting passages of this channel that I have experienced, and that means something, I have been through there more than just a few times. I am looking forward to the videos (coming soon!).