The ongoing discussion concerning possible closure of most of eastern Svalbard has been reported repeatedly on these pages (see for example December 2008). After a public hearing period in late 2008, the Sysselmannen gave a negative vote to the strong restrictions that had been proposed by DN (Norwegian directorate for nature administration). Following the motto “we vote until we get the result that we want”, DN puts the same proposal forward again for another public hearing period. Opinions can be sent to the Sysselmannen (contact the Sysselmannen) until 01 September 2009. A new Sysselmannen will ascend the “throne” in Longyearbyen in September 2009. Evil to him who evil thinks…

According to DN’s proposal, landings in the large nature reserves in eastern Svalbard can only be made at 16 dedicated locations/smaller areas, effectively closing many hundred kilometres of coastline and thus something like 40 % of the archipelago to the interested public.

Today, tourists can access most of the area in question with very few exceptions (Kong Karls Land). During a conference organized by AECO in Longyearbyen in October 2008, leading Norwegian scientists expressed that they did not consider tourism to present any serious environmental concerns or conflicts with scientific work, not excluding the need for recommendations or stricter regulations when it comes, for example, to individual sites.

“No entry” to the red areas, according to DN’s old and new proposal
(click here for a larger version of this map)

Search-and-rescue (SAR) operations can be expensive

…or, rather: they ARE expensive, but in the future you are more likely to pay yourself. So far, there have already been 52 helicopter SAR operations, compared to a total of 72 in 2008 and 60 in 2007, a significant increase. The most spectacular case was a long-distance helicopter flight from Spitsbergen to northermost Greenland and back to evacuate a Dane with acute health problems. In a large number of cases, snow-mobile or ski tourists have been evacuated in Spitsbergen, when frost or bad weather started to take a toll. The Sysselmannen sees an increased readiness to use the satellite phone or emergency locator beacon. Aditionally, too many tourists (including locals) seem not to be well enough prepared with equipment adequate for all possible high arctic conditions and willingness to spend a couple of days in a self-built snow cave, a common and usually safe method to sustain during extreme weather conditions seems to decrease.

The Sysselmannen considers to use the “polluter pays principle” in the future.

Expensive: the Sysselmannen helicopter
(here seen during an exercise) 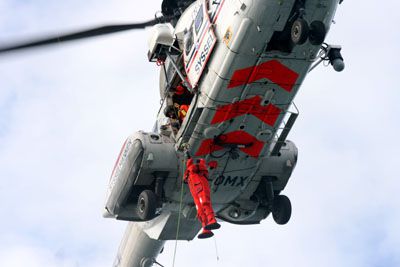 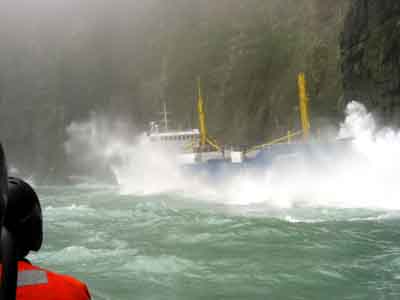