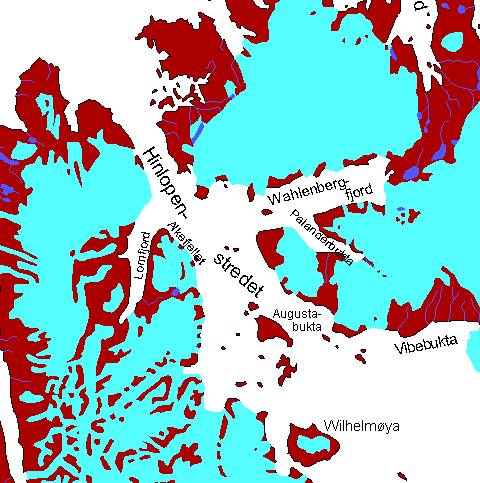 For more information, click on areas of the map below.

General: Strait between Spitsbergen and Nordaustland. Scenic place with interesting history and rich wildlife – one of my favourite places in Svalbard! The name is probably derived from the director of a Dutch whaling company in the 17th century. Ice conditions can be difficult, not at least because of the strong currents.

For panorama images from Hinlopen Strait and neighbouring parts of Spitsbergen and Nordaustland, click here.

Geology: Pre-cambrian, non-metamorphic, deformed sediments (multi-coloured quarzites and dolomites) in the north (Sorgfjord-Lomfjord in Spitsbergen, Lågøya-Murchisonfjord on Nordaustland). These sediments are well-preserved and partly expose very nice ripple marks, desiccation cracks etc. Some of the strata are fossil-rich, well-preserved stromatholites belong to Svalbard’s oldest fossils. In the southwest (Wilhelmøya) Triassic sediments similar to the rocks of Edgeøya and Barentsøya, which can be very soft and muddy. In the southeast (Palanderbukta-Vibebukta) Permian Limestone (Kapp Starostin Formation). 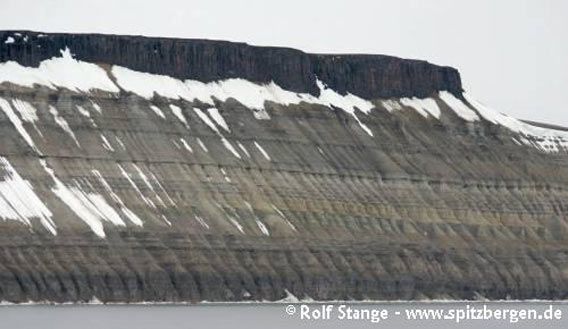 The islands in the Hinlopen Strait consist mostly of doleritic intrusions (upper Jurassic to Cretaceous). Spectacular not only, but also from a geological point of view is the Alkefjellet on the west side of the Hinlopen Strait south of the Lomfjord, where dark basaltic (‘doleritic’) rocks intruded bright Permian limestone. The intrusion is a good 100 metres thick and forms vertical cliffs, on which 10.000s of Brunich’s Guillemots are breeding. At the contact zone, the limestone is metamorphosed due to the heat of the intrusion and thus turned into marble. 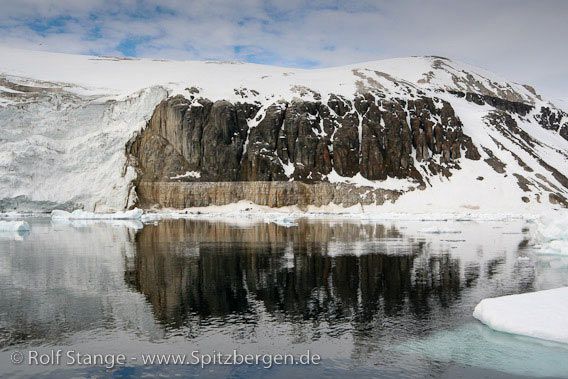 Landscape: Varied and beautiful. Partly large coastal plains with series of old beach ridges, which are well visible. Here, you can sometimes find old whalebones, which disintegrate and fertilize the tundra. The small islands are mostly very rocky and have steep cliffs with colonies of Brunich’s Guillemot, especially spectacular at Alkefjellet. On the east side, the coastal plains are mostly high-polar desert and almost completely vegetation-free, which makes a strong impression on the visitor. 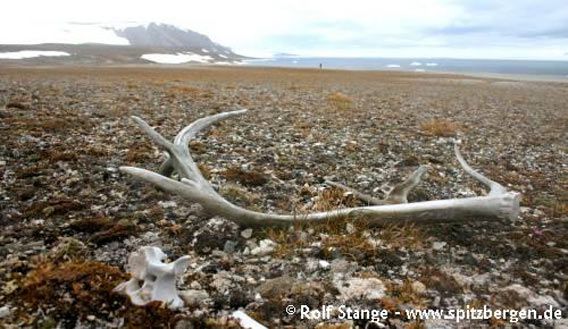 Reindeer antler in polar desert. East side of Hinlopen Strait.

Flora and Fauna: Mostly very little vegetation, apart from lichens and mosses, which make for colourful cussions in some places. Weathering whalebones are responsible for small ‘oasis’ within the otherwise barren polar desert, for example in Augustabukta and Vibebukta. The fauna is very rich. Large bird colonies, mostly Brunich’s Guillemots, breed on steep basalt cliffs. Walrus and polar bear are quite often seen in the Hinlopen Strait. 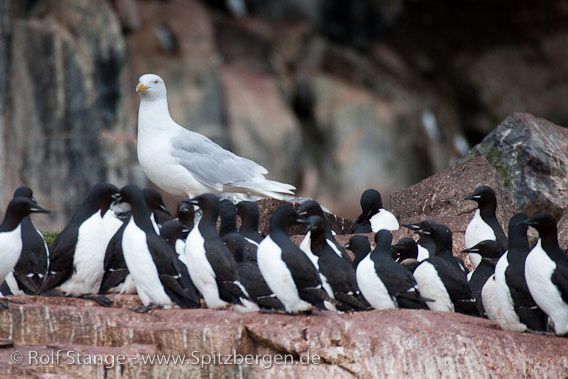 Inhabitants of the Hinlopen Strait I: Brünich’s guillemots at Alkefjellet. 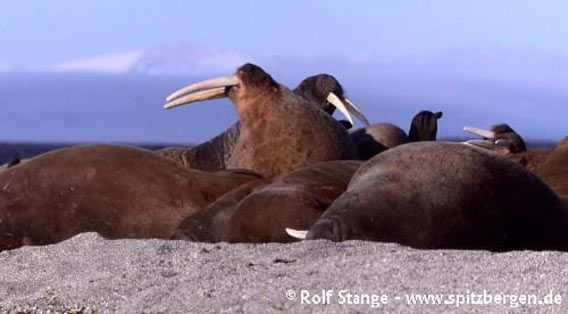 History: The Hinlopen Strait was already known to the whalers of the 17th century, although I don’t know of any remains of shore stations. The Pomors also used the Hinlopen Strait extensively for hunting purposes. Many scientific expeditions visited the Hinlopen in the 19th and early 20th century, definitely worth mentioning is the Russian-Swedish Arc-de-Meridian expedition (1899-1904), which had one main station in the Sorgfjord. Sweden established a station in Kinnvika in the Murchisonfjord during the international polar year 1957-58, which was abandoned in 1959.