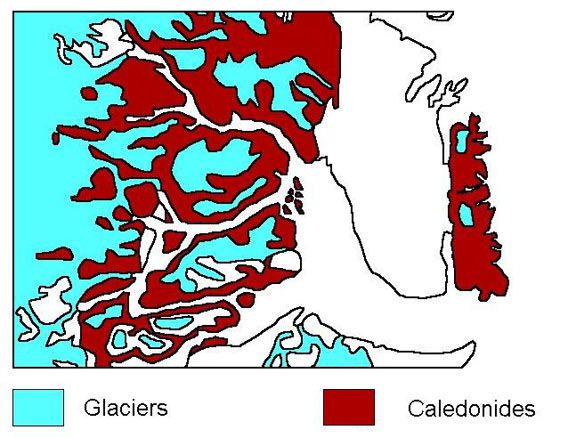 The whole eastern rim of the old shield was severely ‘damaged’ once again a good 400 million years ago, when again two continents collided. This process is called the Caledonian orogeny (‘mountain building phase’), the resulting mountains are accordingly the Caledonides. The colliding continents do roughly correspond to today’s north America (with Greenland) and Europe. In Greenland, remains of the Caledonides can be found at the whole east coast, from the Scoresbysund in the south to the northeastern corner. But those Caledonides are not the spectacular mountain and fjord scenery which we can see today, this came much later. It is rather a mountain system in a more geological sense: the rocks which formed the deep-seated root of the Caledonian mountain chain are now exposed at the surface. The mountains as such, the peaks and valleys, were eroded quite quickly and accordingly disappeared to give way to a rolling lowland at – or partly even below – sea level. 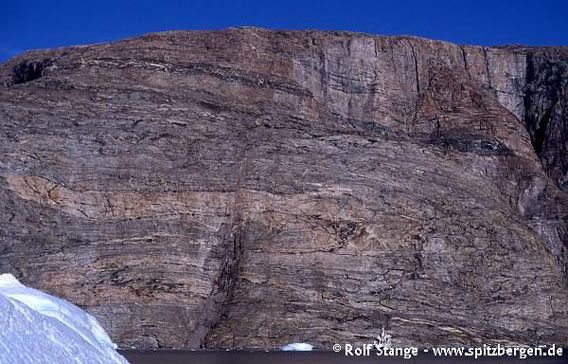 Almost 1000 m high rockwall of deformed granites, gneisses and migmatites (which have been largely, but not completely, molten) in the Nordvestfjord.

The Caledonian rocks are mostly recycled older rocks, mostly belonging to the Precambrian basement/old shield. Thus, another change was imposed on these old rocks, which did already have a long and complex history. It is not at all easy to tell the traces of the Caledonian orogeny apart from those of older, similar events, it is actually often rather difficult even for scientists. Depending on the degree of change, a rock may be rather Caledonian or rather Precambrian (much older), the boundary is transitional. In both cases, it may be a granite, a gneiss or any other rock type and both lock very similar or actually totally the same to the naked eye. The geological map 1:500 000 says the following: “Caledonian Fold Belt. Caledonian and Precambrian partially, influenced by Caledonian reactivation”. That’s clear, isn’t it…?

But generally, all rock masses where traces of Caledonian influence can be found are regarded as part of the Caledonian mountains or, maybe better, Caledonian Fold Belt.

Such a hotchpotch of Precambrian/Caledonian rocks can be found in wide areas in the inner Scoresbysund (see scetch map above). There is the so-called »Vestfjord-Hinks Land Gneis- and Schist zone« stretching N-S from Vestford, west of Rødefjord and in the inner Nordvestfjord. A similar, directly neighbouring belt is the »Gåsefjord-Stauning Alper migmatite- and granite zone«, comprising most of Gåse Land, Milne Land, Renland and the Stauning Alper. A third area is the Liverpool Land, where you can find various granites, gneisses and schists; some of them of Caledonian age (450-400 million years old), others much older, again with transitional boundaries.  The settlement of Ittoqqortoormiit, at the southern end of Liverpool Land, is located on gneiss which mostly belongs to the Precambrian basement and which was only slightly altered during the Caledonian phase. 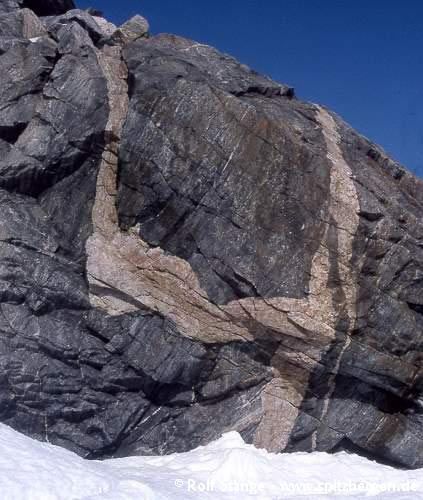 The magmatic and metamorphosed rocks of the Precambrian shield as well as the ones of the Caledonian fold belt are mostly very hard. Nevertheless, during many million years after the Caledonian orogeny, they were worn down to lowland near sea level, but after strong uplift in the lower Tertiary, they are now able to withstand erosion for quite a while, thus forming the impressive landscapes of Liverpool Land, the Stauning Alper and the inner Scoresbysund.