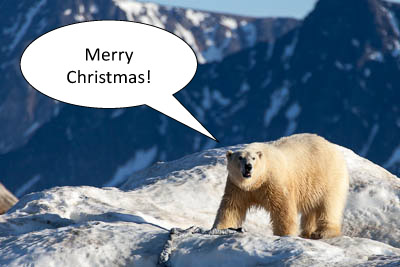 A group of environmental toxins that is new to the Arctic has recently been traced down in Spitsbergen. The so-called siloxans are part of many cosmetics such as deodorants and others. Siloxans are very volatile, which means they can escape into the air very easily and can then be transported over large distances even to the remotest part of the globe. This in itself is enough reason for concern.

In contrast to known environmental toxins such as PCB’s, siloxans are not quickly absorbed and incorporated in the food chain, but tend to stay longer in the atmosphere. The question if this is good or bad remains to be answered. It may increase the chance of the compounds being broken down naturally, which happens under the influence of sunlight during the summer, before they can do harm to organisms. The concentration of siloxans near 1 nanogram per cubic metre of air seems to be low, but is up to 1000 times higher than for PCB’s, for example, which are known to have negative effects on species such as Polar bears and Glaucous gulls.

The environmental consequence of siloxans still needs to be investigated. Detecting them in the environment is technically difficult, which is one reason why they have been found only recently in air samples from the Arctic. The samples were taken on Zeppelinfjellet near Ny Ålesund, Spitsbergen.

The air chemistry station on Zeppelinfjellet near Ny Ålesund. 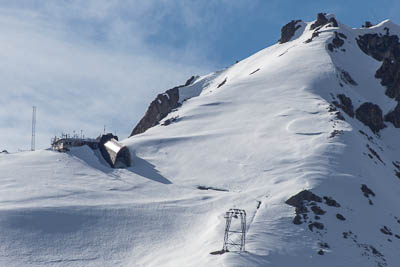 Coal mining in Spitsbergen: deficite in 2012

The Norwegian coal mining in Spitsbergen is expected to yield a deficite in 2012: The mining company Store Norske has announced to be in the red during the ongoing year on a scale that the company has not seen since the opening of the then new mine Svea Nord 12 years ago. Today, the main reason is a several months long production stop in Svea, where only marginal parts of the coal are left: the quality is on the decrease, the proportion of stones within the coal is going up, making a costly grading plant necessary.

When the best parts of the coal seams in Svea Nord where mined around 2003, the company would produce as much as 12,854 tons per year and employee. In 2011, this value was down to 3,922 tons. The low coal prices on the world market contribute to the difficult situation. The company plans to reduce the number of employees from currently 380, but wants to achieve this without dismissals.

In recent years, Store Norske leaders have received critizism for focussing on lawsuits with subcontractors and former director Robert Hermansen, who was then convicted and is currently in prison, but nevertheless enjoys popularity, rather than mining itself. Currently, Store Norske is preparing a new mine at Lunckefjellet, north of Sveagruva, for mining. On the long term, the company aims at new mines in untouched areas, possibly at the mountain Ispallen south of Sveagruva or Operafjellet east of Longyearbyen. 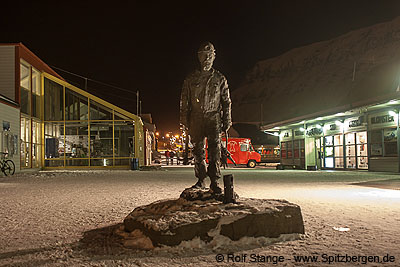 The Norwegian SAR (search and rescue) services in Longyearbyen will have two large Superpuma helicopters at their disposal from 2014. Currently, there is one Superpuma and a smaller helicopter. A Superpuma can carry up to 18 persons.

Until now, these helicopters have been operated by the privately owned company Airlift AS, but in the future the contract will go to another Norwegian company, Lufttransport AS. The Sysselmannen (governor) is accordingly not the owner of the helicopters, but has largely control over their use for official and SAR purposes.

Strengthening the SAR capacities in Longyearbyen will not only benefit locals, scientists, tourists and crews of fishing vessels, but potentially also others in “neighbouring” regions: in recent years, rescue operations from Longyearbyen reached as far as north Greenland and Franz Josef Land.

Superpuma-helocpter in Spitsbergen (here during an exercise). 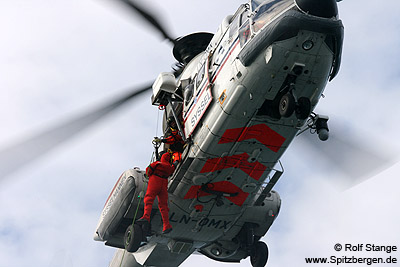 Friday (7.12.) at 6.15 a.m., the fire alarm went in Longyearbyen, when a fire broke out in the coal power plant. The plant is taken off the net and electricity is supplied from the reserve plant, while the fire brigade is doing their work.

A complete refurbishment of the coal power plant has been a matter of political debate for some time. The small arctic town is entirely dependent of a reliable supply with both electricity and community heating. A lasting real blackout would soon result in an evacuation of the population.

Amendment: the fire was under control within a few hours. The extent of damage was still unknown at the time of writing. 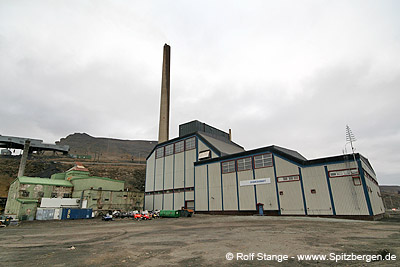