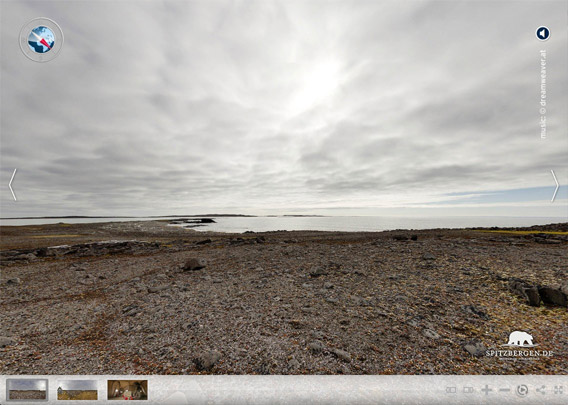 The archipelago of Tusenøyane („Thousand islands“) is a little world on its own. A larger number of little islands, more or less situated in several groups, they are lying south of Edgeøya. In historical times, they had a bad reputation for being difficult to reach because of the often heavy ice conditions; it happened that the drift ice that generally comes from the northeast does not loosen its grip at all during the summer and winterers had to spend a second, then often dramatic year.

The islands of Tusenøyane are all very small, mostly less than a kilometre in diametre. Most of them are very barren and rocky, they are all built up of diabas, a basaltic rock. The surface of these rocky islands is often covered with boulders and they can be difficult to walk on. Larger islands have tundra areas on flat parts, which are very rich in lichens and have a lot of very old whalebones: witnesses of post-glacial land uplift.

There are walrus colonies in Tusenøyane, and polar bears are common in the area.

Because of their animal life richness, Tusenøyane used to be an area where Pomors (Russian hunters) wintered and Norwegian ice sea skippers went, mostly during the summer, to catch walrusses, seals and polar bears. Unintended, dramatic winterings occurred more than once.

This small, triangular hut does not have a historical background. It was built by scientists from the Norwegian Polar Institute. It is the only hut still standing in Tusenøyane. Only inconspicuous foundations remain from older ones.