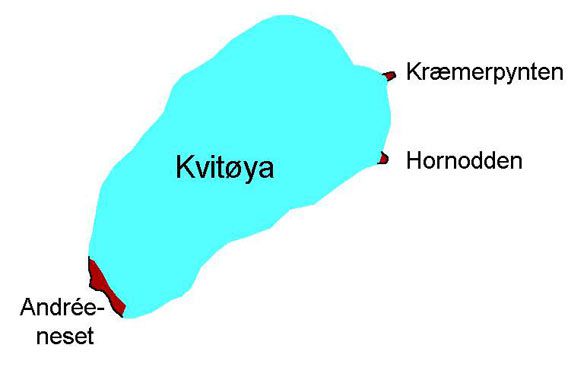 General:Kvitøya (“White Island”) is the remotest island of the Svalbard archipelago at 80°N/32°30’E. Kræmerpynten, the eastern point, is the easternmost part of Norway. From here, it is only approximately 40 nautical miles to Victoria Island, which belongs to Russia. Kvitøya has an E-W extension of 44 kilometres and an area of 250 km2. It is almost completely ice-covered and belongs to the Northeast Svalbard Nature Reserve. The climate is high-arctic, it is surrounded by heavy pack ice for most of the year – or at least, this was the case until some years ago. Now, in the times of climate change, the island is usually accessible at least late in the summer season. Kvitøya is known for being the place where the Swede Salomon August Andrée and his to companions, Knut Frænkel and Nils Strindberg, died in 1897 (see ‘history’ section below). Landscape-wise and biologically, it is a link between Svalbard and Franz Josef Land further east.

Geology: Gneiss (Andréeneset and Basalt (Kræmerpynten), both part of the basement. The basement basalts of Kræmerpynten are quite rare, other than here, they occur only on Storøya, between Kvitøya and Nordaustland.

Most of the island is covered with an ice cap, hence the name Kvitøya (“White Island”), or Vidön in Swedish, the name you will find in some of the books about the Andrée expedition.

Landscape: Kvitøya is almost completely covered by an ice cap with the classical, hourglass-shaped dome. The few ice-free land areas are each only a few km2 large and very barren and rocky. 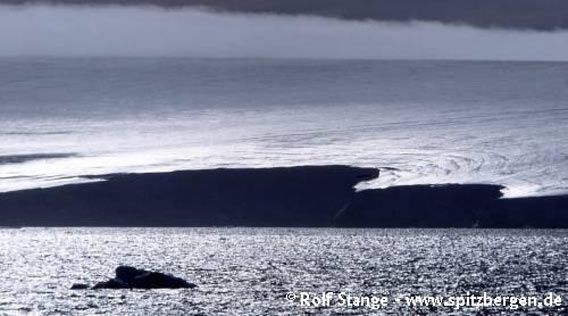 Flora and Fauna: The ice cap is completely dead, other than the occasionally polar bear passing through or some snow algae, but otherwise there is nothing living up there. On the ice-free parts, there are moss beds which can be very colourful, but most of the ground is free of vegetation. Due to the flat topography, there are no cliff-breeding seabirds, but there are some Arctic tern colonies and some other birds are breeding, including Red throated divers. Polar bears and walrus are quite common, the latter ones having haul-out sites there with a higher proportion of females and calves than further west in Spitsbergen. This is more typical for Franz Josef Land, where most females spend their time, whereas males tend to hang out in Svalbard. Walrus groups with females and calves tend to be more aggressive than males.

History: Kvitøya was discovered probably already 1707 by the Dutchman Cornelis Giles. Under the name ‘Giles Land’ (different spellings exist) it was seen on maps in different shapes, sizes and positions throughout the centuries. Even today, the shape is wrong on many maps, where it is shown to be much narrower than it actually is (the scetch map above gives the correct shape).

Kvitøya is well known because Andrée and his two fellows, Frænkel and Strindberg, landed on its western point, now known as Andréeneset, after their ill-fated balloon expedition in 1897 from Virgohamna on Danskøya. After a long Odyssey over the ice, they reached Andréeneset on 05 October and died there after a few weeks. Their last camp was found only in 1930, there is a simple concrete memorial at the site. 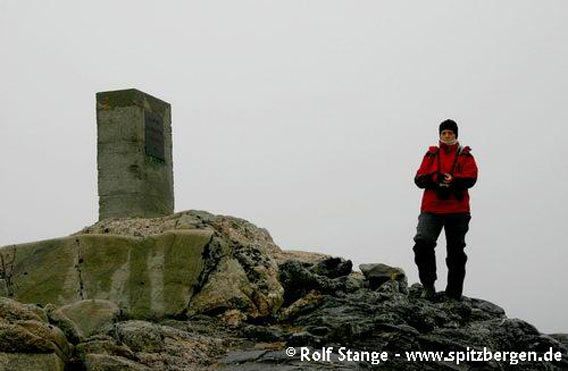 The cause of death has been a matter of debate ever since. Scurvy, starvation, exhaustion, trichinosis, polar bears and cold were naturally amongst the first suspects, and a combination of any of these may have been possible. Poisoning from carbon monoxide or lead (from tins) has been discussed, and more recently also botulism. 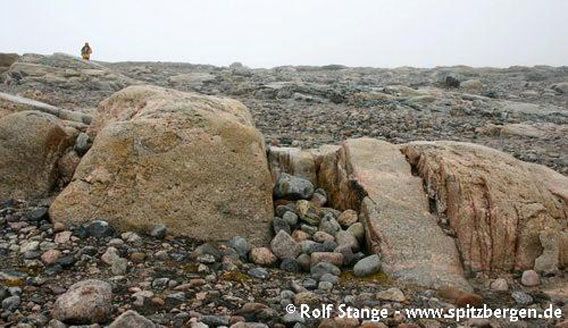 Nils Strindberg was buried 1897 in this crevasse.