Development of tourism in Spitsbergen

Numbers show pronouced peaks during the main seasons in March/April and during the summer (late June-August). The local tourism industry aims for better use of their capacities during the off-season including the polar night.

The large percentage of Spitsbergen tourists who come on board major cruise ships and do not stay overnight in any hotel is not included in the numbers above.

The “Nordpol Hotellet” in Ny Ålesund.

Plans about new coal mine

SNSK (Store Norske Spitsbergen Kullkompani, the Norwegian mining company) has announced to open a new coal mine at Lunckefjellet in 2013. Lunckefjellet is between Sveagruva and Reindalen in Nordenskiöld Land. Lunckefjellet is supposed to have exploitable coal seams with a thickness of around 2 metres, totalling to approximately 10 million tons.

Exploration drillings have also been carried out recently in Colesdalen (southwest of Longyearbyen), although without economically significant results so far. Plans for further investigations in Nathorst Land (between Van Mijenfjord and Van Keulenfjord) have been announced.

2007 was the most productive year in SNSK’s history until now. More than 4 million tons of coal have been mined in Sveagruva (near-by Sentralfeltet, to be accurate); in addition come almost 80,000 tons from gruve 7 near Longyearbyen. In 2006, the production was 3,6 million tons, 70 % of which were sold to Germany (main customers: Eon (electricity) and steel production).

The project is not undisputed. Criticism includes interference with the untouched environment: amongst others, the mine requires a road to be built across a glacier. Also, environmentalists accuse the Norwegian government to apply different standards to the state-owned SNSK than is generally communicated to the international public. Oslo promotes climate-friendly procedures both for the mainland and for Svalbard.

The position of the envisaged mine at Lunckefjellet. 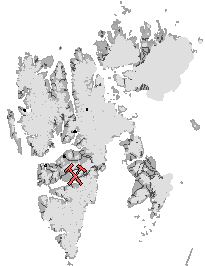