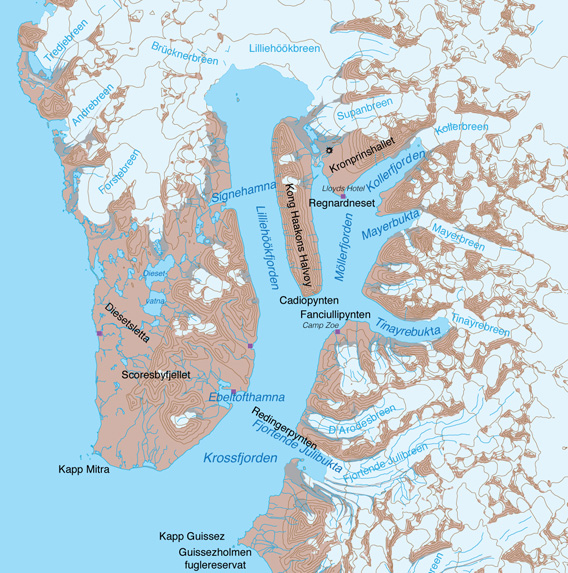 Scroll down to the end of this page or use the links below to see photos, sorted in several galleries, from five places of interest in Krossfjord:

Fjord area with beautiful and varied landscape and a long history. Krossfjord has several branches and side-bays and the largest glacier in this part of Spitsbergen. Lilliehöökfjord and Möllerfjord are the main branches in the northern part of Krossfjord. The north and east coast of Krossfjord are very mountaineous and heavily glaciated. The name is derived from a wooden cross that was erected by whalers in the entrance of the fjord system centuries ago. The cross has disappeared.

The gulf stream keeps the climate relatively mild (for regional standards at least) and the fjord open for most of the year. Krossfjord lies within the Northwest Spitsbergen National Park. The small islet near Kapp Guissez between Kongs- and Krossfjord is a Bird sanctuary, entry or approach closer than 300 metres are prohibited during the breeding season (15th May to 15th August). Ebeltoftodden on the south side of Ebeltofthamna is closed because of cultural heritage remains. 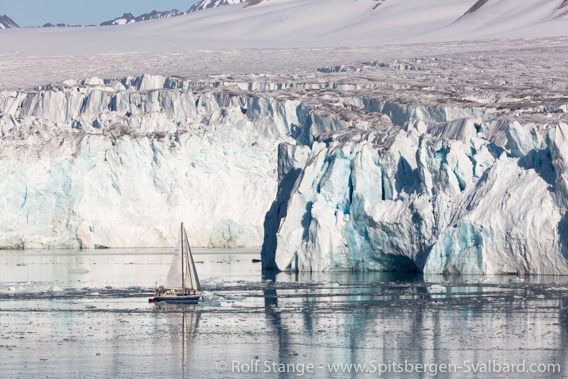 There is a couple of sub-pages with panorama images and additional information on spitsbergen-svalbard.com so you can take a virtual tour to a number of sites in the Krossfjord area:

Varied. Mostly basement rocks, prediminantly Phyllites and mica schist, which were deformed strongly both during the Caledonian orogeny (Silurian) and the Alpidic orogeny (here lower Tertiary), when large sheets were overthrusted. 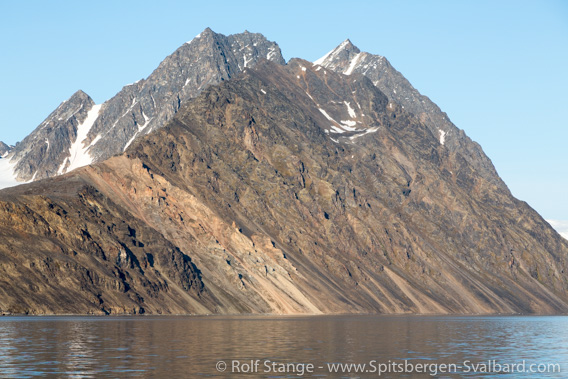 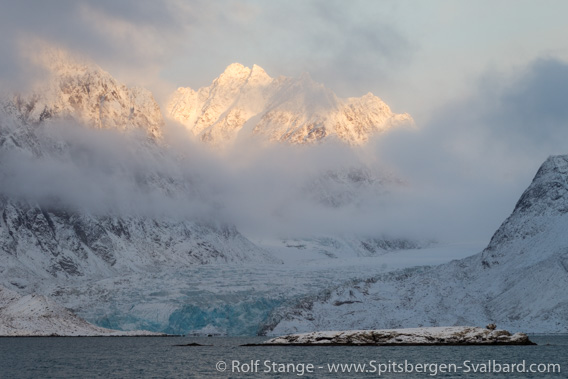 Mountain scenery on the east side of Krossfjord.

The scenery around Krossfjord is mostly mountaineous. Larger lowland areas are limited to Kapp Guissez, Kapp Mitra and the outer coast. The inland north and east of Krossfjord is strongly glaciated, and several glaciers reach the various branches and side bays. Lilliehöökbreen is the largest of the calving glaciers in Krossfjord, although it has retreated strongly since the early 20th century, with an accelerating trend in recent years. Beautiful glaciers can also be found in Tinayrebukta and Fjortende Julibukta, to name just some examples. 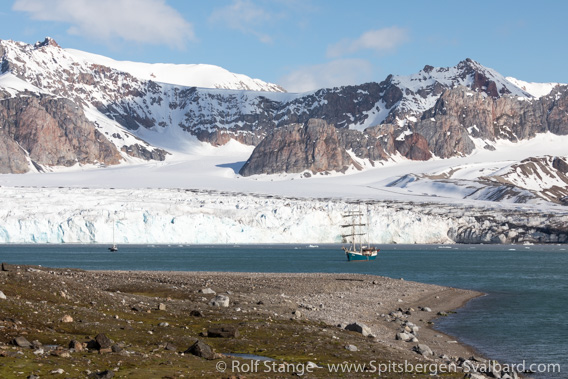 The relatively mild climate and the readily weathering schist together produce some rich vegetation. The tundra in Krossfjord is typically a colourful carpet especially rich in mosses and lichens, such as in Signehamna. The vegetation is especially rich in the vicinity of bird cliffs, such as the “hanging gardens” near Redingerpynten in Fjortende Julibukty (be careful with the fragile vegetation on the slopes and keep a good distance from breeding birds, especially geese, which are easily scared away). 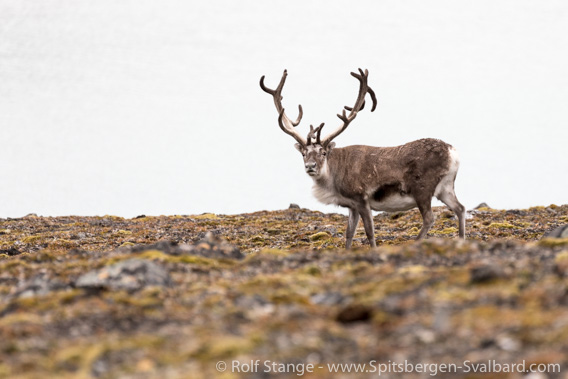 Reindeer on tundra with lichens and mosses in Signehamna. 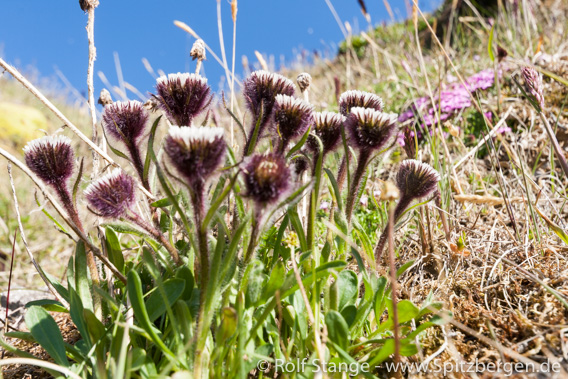 There is a number of bird cliffs with Brünich’s guillemots and kittiwakes next to smaller numbers of puffins and glaucous gulls. Most bird cliffs are high above sea level, but there are some more accessible ones at Redingerpynten in Fjortende Julibukta and at Cadiopynten. Arctic foxes feast on everything that might fall down from these cliffs and reindeer graze on the tundra. Polar bears are not necessarily an everyday sight in Krossfjord, but they can show up anywhere and at any time, so you never know … 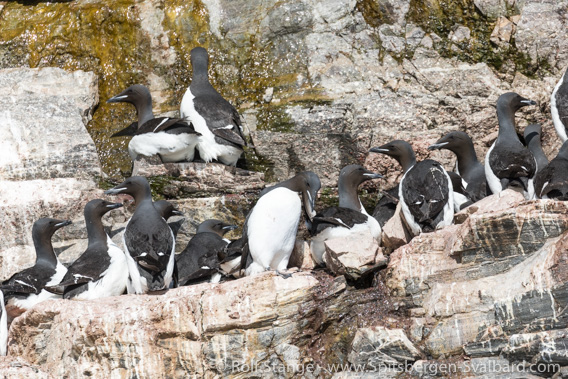 Being of relatively easy access, the area has a long history. The 17th century whalers knew these fjords, but no remains of whaling stations are known from this area. Some of the earliest winterings of Norwegian hunters in Spitsbergen have taken place in Krossfjord in the 19th century. In 1906 and 1907 Krossfjord was investigated during oceanographical expeditions by Duke Albert I. of Monaco. The duke was himself a keen oceanographer and he took part in both expeditions. Albert II. of Monaco visited Krossfjord a century later, in 2006, to find the glaciers much smaller. Names like Fjortende Julibukta (14th July Bay, after the French national day) and other French names date back to the expeditions of Albert I.

There was a German observatory in Ebeltofthamna in the years from 1910 to 1914. It was mainly a weather station set up to investigate if the area would be suitable for polar research by airship, initiated by count Ferdinand von Zeppelin during his 1910 expedition which claimed large land areas in the Kongsfjord-Krossfjord area and further north up to Raudfjord. 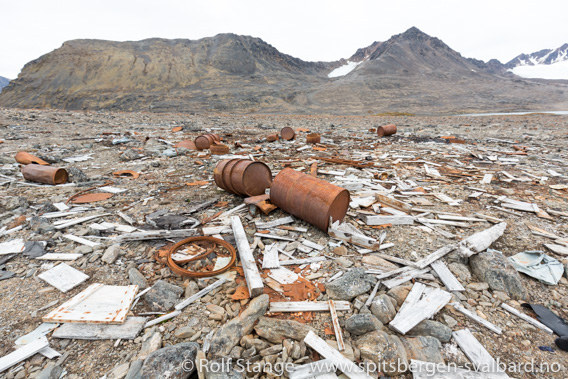 Remains after the German weather station from the second world war in Signehamna.

Lilliehöökbreen is the largest glacier in the area. It is strongly retreating due to climate change.

Signehamna is another frequently used landing site. During the second world war, it was the sight of two German war weather stations.

During the years from 1910 to 1914, Ebeltofthamna housed the German “geophysical observatory” initiated by count Zeppelin. At Collinsodden, some kilometres down the coast, the scientists used a trapper’s hut as a secondary observatory during one winter to observe northern lights simultaneously from two different places for altitude determination. They connected their stations in Ebeltofthamna and at Collinsodden with an improvised telephone line!