The seed vault near Longyearbyen, that is supposed to secure global gene resources for future generations, has now more than half a million samples of seeds from food crops. This makes Spitsbergen’s seed vault the largest collection of its kind in the world.

The latest samples include highly resistant beans from South America, strawberries from the Kuriles in the northern Pacific and American soja beans.

The seed vault was opened in February 2008. The arctic permafrost protects seeds of corn, beans, and other culture crops from plant disease, climate change, war impact and natural desaster. So far, only one out of three chambers is in use; the other ones are supposed to be used in 25 and 100 years, respectively.

The entrance to the seed vault near Longyearbyen. (© Photo: Hagen Held) 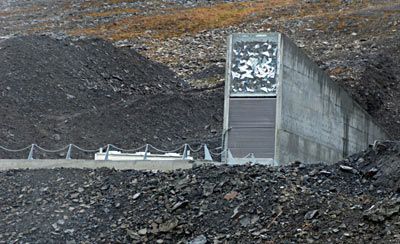 The joint Norwegian-Russian Commission on Environmental Protection has published a website and a report with comprehensive, interesting information about the Barents Sea ecosystem, relevant for administration and the environment.

It looks grey, but is actually complex and needs environmental consideration: The Barents Sea
(At Bear Island). 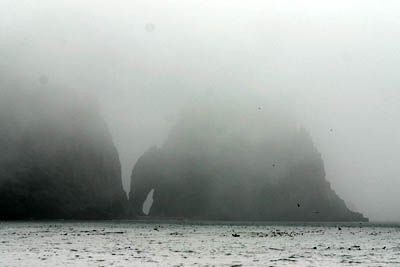 Several ships that have been cruising Spitsbergen’s coast extensively during recent years will not return again: Origo (25 passenger capacity), Grigoriy Mikheev (44), Alexey Maryshev (44), Professor Molchanov (54) and Professor Multanovskiy (54). The recent development is to replace these smaller ships with a lesser number of slightly larger, modern ones.

Will not come back: MV Professor Multanovskiy (here in Greenland). 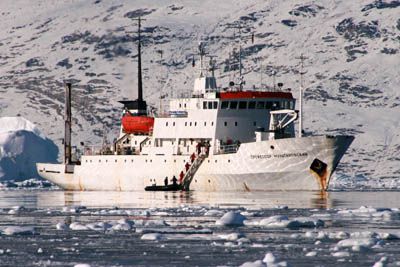 The first sunrays after the polar night are alway an event in the Arctic. Now the time has come for Longyearbyen, and the event will be marked with a number of celebrations and cultural events, startign 07 March, the so-called »solfestuke« (sun festival week).

Alway an event in the Arctic: The last sunrays before and the first ones at the end of the polar night. 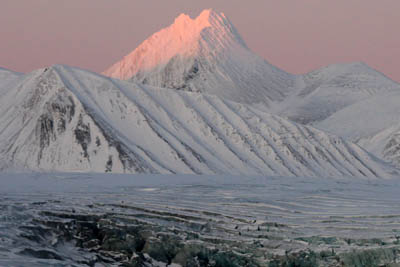 … something like this was one of many headlines in Norwegian newspapers after a report had been published about greenhous gas emissions in Svalbard. The report was compiled by KliF (»Klima og forurensningsdirektorat«, Norwegian authority on emissions) on request from the Norwegian Ministry of the enrivonment. According to the report, large oversea cruise ships are responsible for the bulk of the 50 % increase of climate-relevant gas emissions from 2000 to 2007, followed by coal mining (including coal shipping) and energy production.

The report has received strong criticism from several sides for using wrong data. For example, the total use of fuels by oversea cruise ships in the region has been calculated to be 20,208 tons for 2007, but could easily shown to be far less (7,764 tons, with careful assumptions, probably less) by using data from the Sysselmannen. Similarly, too large numbers have been used for coal transport ships and the coal power plant in Barentsburg (assumed 45,000 tons coal per year, but the consumption capacity is apparently only 30,000 tons).

The report is principally welcomed, but it is criticised that official reports that advise politics use wrong numbers, where correct ones could easily be obtained. KliF said that the aim was to give a general picture and time to achieve correct details could not be afforded. Critics fear that careless use of vital data damage faith of companies and population in (environmental) science and, consequently, administration that is based on such data. It is demanded that the report should be withdrawn and a revised version should be published.

How much is it? That’s what we want to know.
Coal power plant in Barentsburg. 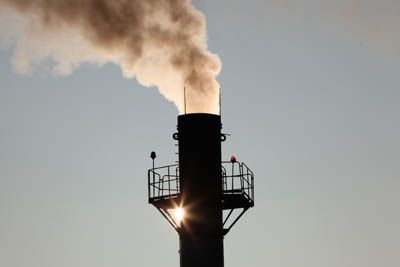 Analysis of a polar bear jawbone that was found on Prins Karls Forland has not only yielded an age of 110.000 to 130.000 years, but also provided new information on the evolution of the species. The results confirm that the species “polar bear” is very young indeed and had split from brown bears as recently as around 150.000 years ago, as DNA analysis from the fossil have shown. Adaptation to the high arctic environment must then have been rather fast and efficient.

Polar bear skull in arctic desert-kind of tundra.
Fossils are rarely found as polar bears spend most of their life on drift ice and usually die there. 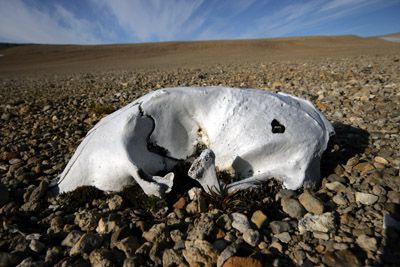