In 2014, Russia wants to intensify its military activity in the Arctic by establishing a new command structure which has the objective to defend Russia´s national interests in this region. This includes the protection of military facilities and civilian ships as well as securing access to the mineral resources on the Arctic shelf.

The new military structure will be called “Northern Fleet – United Strategic Command” (SF-OSK). Its status will be that of a military district, even if this is not officially shown in its name. So far, the Russian military is organized in four large districts: Western, Southern, Central and Eastern.

The main combat force of the SF-OSK will be the Northern Fleet, which is based at the Murmansk region, close to the Norwegian border. It will be withdrawn from the “Western Military District” to form the basis of the new structure. Other units from Northern Russia will be added and new units will be based at Novaya Zemlya, at Franz Josef Land and on the Novosibirsk Islands.

This new strategic orientation of the Russian military must be seen in relation to the exploration of resources in the Arctic during the last years. Estimates tell us that about 30% of the world´s undiscovered gas deposits and 15% of the oil are located on the Arctic shelf. Here, as other countries in this region, Russia defends its economic interests, without making a secret of it. Proposals of putting the Arctic under the control of the international community or to establish protected areas, similar to those in the Antarctic, were unambiguously refused by the Russian President Vladimir Putin in October 2013.

Bukhta Tikhaya, a station on Hooker Island (Ostrov Gukera), Franz Josef Land, abandoned in 1959. In 2014, Russia wants to increase its presence in the area again. 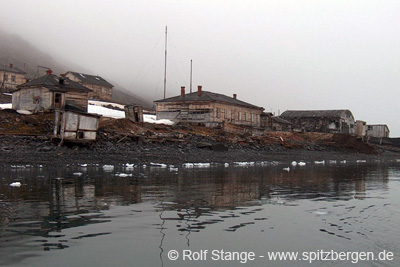 The retreat of Arctic sea ice acts as an accelerator for climate change, since the bright ice surfaces reflect much more sunlight than the darker surfaces of open water. Ice reflects up to 90% of solar energy back to space while water absorbs a large amount of energy and warms both itself and the overlying air layers.

If warming leads to retreating ice, then this effect causes additional warming and the ice melts even faster: a classical positive feedback reaction. Of course this would also work the other way around: If lower temperatures cause an expansion of snow and ice covered areas, this would lead to an additional cooling.

The ability of surfaces to reflect radiation is expressed by the albedo, a figure that quantifies the amount of reflected radiation in percent.

Scientists of the University of California in San Diego could now, by satellite measuring, verify that the albedo north of the 60. degree of latitude is falling and that this is related to the retreat of arctic sea ice. The result of the measurements is that the albedo decreased from 0,52 to 0,48 between 1979 and 2011. Instead of 52% now only 48% of the solar radiation in the Arctic is reflected. This corresponds to an additional average input of solar energy of ca. 6,4 W/m² since 1979. Averaged over the globe this corresponds to an additional energy input of 0,21 W/m², which is 25% of the amount attributed to the increase of CO2 in the same period.

These figures are significantly higher than those expected before by models and estimates.

Another result of the measuring is the fact that the albedo also decreased in areas which were covered with ice all over the year. One explanation for this is an increasing occurrence of melt water lakes on the ice which again absorb more solar energy and cause additional warming. 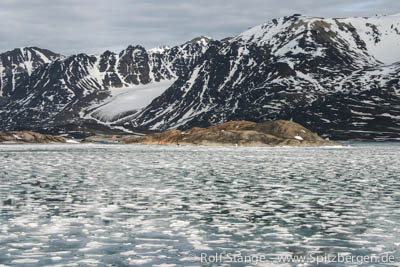 Sources: Spiegel Online Wissenschaft, Proceedings of the National Academy of Sciences of the United States of America (PNAS)

Thursday (February 20) the return of the sun at the end of the polar night is celebrated in Barentsburg. Longyearbyen has to wait until March 08, because there are more mountains towards the southern horizon.

A good opportunity for some general thoughs about polar night and polar day. The basic celestial mechanics are generally known: the tilt of the axis of the Earth, which is the reason for polar night and day. Also the so-called Novaya Zemlya effect: the refraction of sunlight in the cold atmosphere, which makes the polar day seemingly (!) longer than it should be, astronomically: the sun is visible even though it is actually just under the horizon, because the sun rays are refracted in the cold atmosphere. This makes a difference of several days and depends on the weather situation. It is called Novaya Zemlya effect because of an early observation of this phenomenon on Novaya Zemlya by Willem Barentsz’ expedition, 1596-97, the same voyage during which Spitsbergen was discovered.

So far so good. But still, the polar night should have the same duration in Arctic and Antarctic on any given latitude, one would expect. But this is not the case. This is a quotation from the South Polar Times, the famous expedition gazette published for the first time during Scott’s first expedition on the Discovery in April 1902. The editor, by the way, was a certain Ernest Shackleton. The following quotation is on page 18: “The South Polar Winter is nearly eight days longer than the North Polar Winter. This is because in the former case, the Earth is farther away from the Sun (aphelion) ,and therefore moves more slowly in its orbit. In the Northern Winter the Earth is closer to the Sun (perihelion) ,and therefore moves more rapidly.” (punctuation as in the South Polar Times, which was typed manually under rather enduring conditions).

The reason is the second of Kepler’s laws of planetary motion: “A line joining a planet and the Sun sweeps out equal areas during equal intervals of time.” In other words: The Earth is moving faster when it is closer to the sun. Simple, isn’t it?

How big is the difference now? The duration of the polar night is

meaning that the difference amounts to six days! The calculations can quite easily be made on a website provided by the US Naval Observatory.

Hut Point, where the South Polar Times was written in 1902 for the first time, is at 77°47’S, 133 nautical miles north of the 80th parallel. The difference of eight days claimed there is accordingly a little bit too much. The value is seven days at the poles.

This is why the polar night is longer in the Antarctic than it is on a corresponding latitude in the Arctic. The answer is Kepler’s second law of planetary motion.

Thanks to Andreas Kaufer for specialist advise and reference to the US Naval Observatory.

The last light of the sun in Barentsburg at the beginning of the polar night, October 22nd. 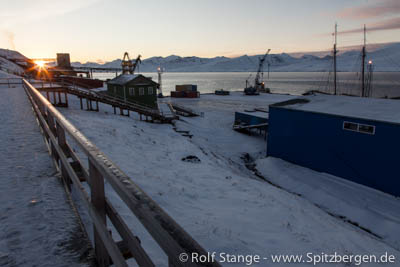 Noorderlicht waiting for the ice in Tempelfjord

In the winter season, the two-mast schooner Noorderlicht freezes into solid ice in Tempelfjord to serve as a destination for tourist activities like snowscooter- and dog sledge tours.

This year the ice is so far missing, so the ship is still waiting its job. Similar to last year, winds from the south are pressing warm water into Isfjord and keep even Tempelfjord still open, which is located at the eastern (innermost) extremity of Isfjord. Another reason are extraordinarily high temperatures in Spitsbergen which have now varied around the freezing point for weeks and make this winter so far one of the warmest since the beginning of the recordings.

Now the tour operators hope for lower temperatures so that the season can start as planned at the end of February when the first tours are scheduled. Last year, the temperatures went down in March and the “boat in the ice” could begin its season just in time. 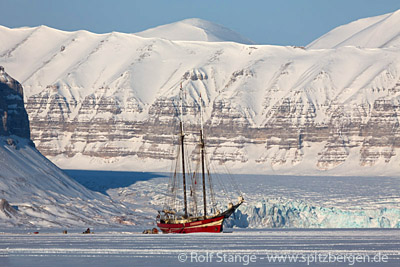 Decline of population in Longyearbyen

Against a long-term trend, the population in Longyearbyen fell by 47 to the number of 2043 in 2013. This is indicated by the annual report of the Sysselmannen for 2013. As Svalbardposten reports, amongst these 47 there are 17 children in pre-school age, which equals 36%.

Compared to places of similar size on the Norwegian mainland, the number of inhabitants in Longyearbyen can face stronger variations, as those who are registered as residents usually live there for a limited period of time, mostly in accordance to their jobs. Working contracts are temporary, rotations amongst the employees are usual and often desired by employers and many wish to return back home after one season in the arctic. For these reasons, a high fluctuation is quite typical for Longyearbyen.

However, in the last years the number of inhabitants increased permanently. In 2010 there were 1966 people registered in Longyearbyen, in 2011 the number was 2063 and in 2012 it was 2090. Therefore the local government is not concerned about the single decline in 2013, it is not seen as a sign for a long lasting negative trend.

Svalbardposten discusses possible reasons for the current decline of inhabitants: Restructurings at the mining company Store Norske are mentioned, which led to staff reduction. On the other hand the relatively high decline among young children leads to the assumption that many of the new inhabitants came without families. As the reference date for the evaluation of the number of inhabitants is the 31st of December, it is possible that the divergence equalizes again during this year.

In his annual report the Sysselmannen publishes the number of inhbitants for all settlements in Spitsbergen. These are, in addition to Longyearbyen, the settlements of Ny Ålesund (34) and Barentsburg (419), the hotel at Kapp Linné (Isfjord Radio) (1), the four trapper stations Kapp Wijk (1), Akseløya (1), Kapp Schollin (1) and Farmhamna (1) and the polish polar station at Hornsund (10). The workers of the coalmines at Sveagruva, Svea Nord and Lunckefjell, are not registered there, their residences are in Longyearbyen or on the mainland. In 2013 the average number of workers in Sveagruva was 208.

Has currently a few pupils less: school in Longyearbyen. 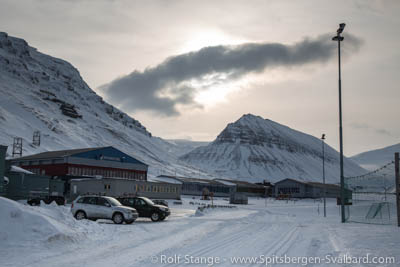 The light is slowly coming back these days in Spitsbergen after the polar night, but it will take another 2 weeks more or less until the sun makes it above the horizon again. While it is relatively calm in the far north, it is time to get a bit of homework done. There is plenty of material for 360 degree panoramas waiting to be processed, and the pages with regional descriptions on spitsbergen-svalbard.com are to be completed with comprehensive photo galleries from the individual parts of Svalbard.

Both requires significant time and effort, but there is progress. A site that is now complete with galleries and panoramas is the one about Lomfjord in northeastern Spitsbergen, neighbouring Hinlopen Strait.

These sites are just part of a major development that is aiming at a comprehensive illustration of all parts of the Spitsbergen archipelago (and Jan Mayen and parts of Greenland and Antarctica, for that sake) with photo galleries and navigable 360 degree panorama material. This requires a lot of effort in terms of both time and money. The results are on spitsbergen-svalbard.com and can be freely accessed at no cost and without registration or whatever, but the website and its owner/maker are happy about links or like it clicks. If you want to support these efforts financially, then please have a look on the right side if there is any book or calendar that might fit well into your collection or as a present …

View over Lomfjord, which has now got a comprehensive site complete with photo gallery and 360 degree panos. 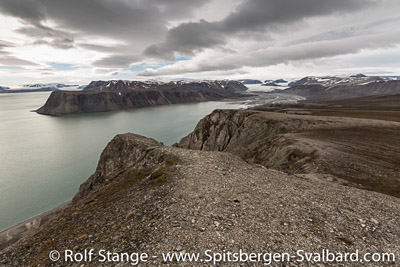