Brucebyen is a small cluster of huts i Billefjord, near the large glacier Nordenskiöldbreen opposite the former Russian mining settlement of Pyramiden. Boat trips from Longyearbyen to Pyramiden usually visit Nordenskiöldbreen and pass by Brucebyen on their way there. Often, not much mention is made of it, which is a shame, because it is quite an interesting place. 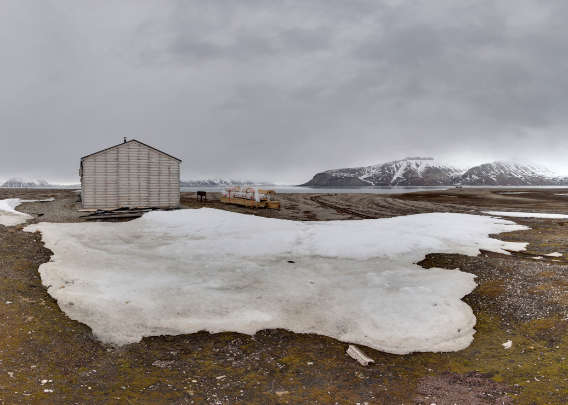 The natural surrondings are one aspect, and it would be an interesting and beautiful place well worth a visit even without the mining history. The surroundings of Brucebyen are a flat coastal plain with well-developed series of old beach ridges and small ponds where you can see red-throated divers (they are easily disturbed, keep a good distance) and arctic terns (also easily disturbed and quite aggressive, so … the same applies here). It is not uncommon to see a polar bear roaming around in the area, so keep your eyes open and be carefull as always when in the field in Spitsbergen. 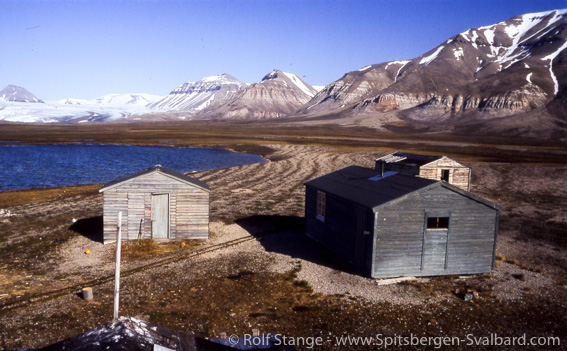 But the little “settlement” has some interesting history. The famous Scottish polar explorer William Speirs Bruce was a key figure in it. Bruce’s first polar expedition was as early as 1892 with the whaling ship Balaena in the Antarctic. In 1896-97, he spent a year with Jackson and Harmsworth in Frans Josef Land where he met Fritjof Nansen and Hjalmar Johansen after their wintering, which is another story, one of the most famous ones in arctic exploration. In 1898, Bruce joined Andrew Coats on an expedition to Novaya Zemlya and Kolgujev in the Russian Arctic on the Blencathra. On the way back, he got some first glimpses of Spitsbergen, namely Kong Karls Land and Hopen, but poor weather conditions kept them from going ashore.

But he got his first chance for some closer views already later in the same summer. After returning to Tromsø, he met Duke Albert I. of Monaco, who was just about to start an expedition to Spitsbergen with his yacht Princess Alice. The Duke offered Bruce to join him and he gladly accepted the offer.

Bruce joined the Duke on several further expeditions, investigating large parts of Spitsbergen’s west coast and some of the fjords on the north coast. This gave Bruce the opportunity to make himself familiar with the regional geology and he saw the potential for mining in several locations. It was mostly coal, but also other minerals such as iron ore (on Prins Karls Forland) that caught his attention. Samples taken in 1908 proved interesting and Bruce and others founded The Scottish Spitsbergen Syndicate Ltd. (SSS) in Edinburgh in July 1909. Founding members included people like Charles H. Urmston and Burn Murdoch, names that you can find on the map in Spitsbergen today, as well as those of members of the syndicate’s expeditions including Rudmose Brown and John Mathieson. Duke Albert I. was amongst the initial shareholders. 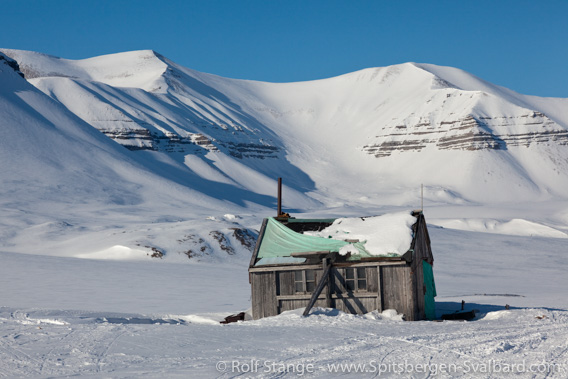 Hut in Gipsdalen, built by the Scottish Spitsbergen Syndicate
to investigate coal occurrences (photo taken in 2010).

Bruce saw mining potential in several areas, but mainly in inner Isfjord: his attention was attracted by both gypsym occurrences in Tempelfjord and coal in neighbouring Bünsow Land (between Tempelfjord and Billefjord). The syndicate organised expeditions in 1910, 1912, 1914, 1919, 1920, 1921 and 1922 to explore these occurrences as well as other parts of the Spitsbergen archipelago (the name Svalbard was hardly used before 1925).

But back to the Billefjord area, where the SSS investigated coal seams in various locations from 1919. For geological reasons and because of accessibility, an area on the south side of Adolfbukta was chosen as the main location for investigations. A coal seam in the steep river flank of Carronelva looked promising, and Bruce’s geologists found it to have a thickness of about one metre. Two huts were built near the shore (two more ones followed later). This base was soon known as Bruce City. Other groups of the 1919 expedition, which had the ships Phantom and Petunia at their disposal (also names found on the map in the Billefjord area now) investigated other areas such as Tempelfjord and Storfjord including Barentsøya as well as Prins Karls Forland. Various claims were made although not much of commercial interest had been found. 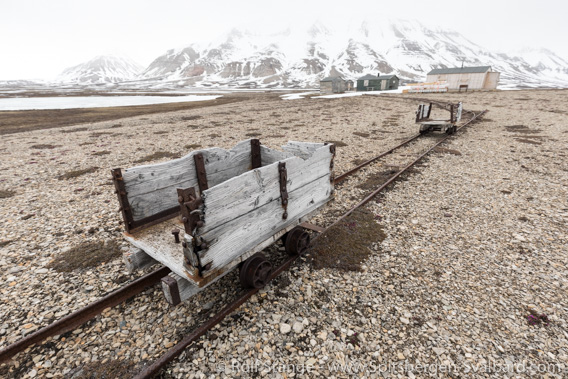 The amount of coal south of Adolfbukta, the area investigated from the base at Bruce City (today Brucebyen), was estimated to be in the area of 2.5 million tons based on data collected in 1919, a figure well below initial expectations, but more data were needed before any exploitation could possibly be started.

The expedition in 1920 had even one more ship at their disposal than in the previous year, the Autumn, the Eastonian and the Lady of Avenel, with no less than 50 expedition members led by John Mathieson. The Lady of Avenel had engine troubles on the way up and the trip took no less than 33 days for this section of the expedition. Once in Billefjord, it took great effort to transport drilling equipment and other materials across ice and snow to Brucebyen as the fjord was still frozen in that area. Finally, several drillings were made in the Carronelva area as well as other geological investigations. Further work was done on the east coast of Spitsbergen (Agardhbukta, Mohnbukta) and on Edgeøya and Barentsøya. Most of the results were rather disappointing: the coal seams were mostly of poor quality, they had a thickness of well below one metre and accessibility was difficult. But the total amount of coal on the east side of Billefjord, in an area then known as the “Bruce City Coalfield”, was now estimated at 90 million tons, something that justified further investigations.

The expedition in 1921 was smaller, with only 10 men who focussed on the northeastern part of Billefjord. They used “Bruce City” as their main base again. Additional work was done in Gipsdalen where they found a coal seam in a distance of 16 km from the shore. All in all, the results were found to be promising.

Another expedition was hence made in 1922, that time with 15 men, again led by John Mathieson. They used a tractor to transport material 16 km up Gipsdalen for explorative drilling. It is most likely the tractor that is still standing near the shore in Gipsvika, next an old hut that also goes back to the times of the Scottish Spitsbergen Syndicate. The tractor was weighing a ton and it was a bit of a challenge to get it ashore: a kind of raft was made with two life boats, which was towed into the river mouth of Gipsdalselva in high tide and calm weather. 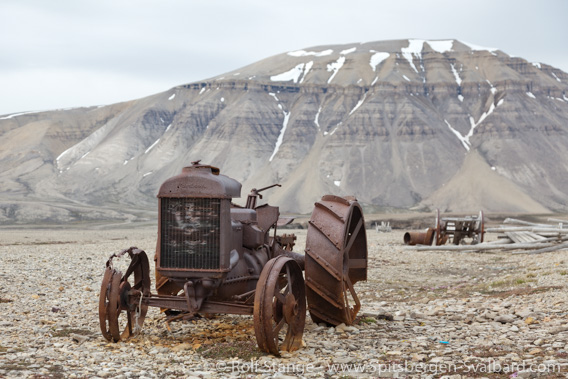 The tractor of the Scottish Spitsbergen Syndicate in Gipsvika (in 2009).

Also the iron ore occurrence on Prins Karls Forland was investigated again in 1922. Remains of the hut Kenmore at Dawespynten date back to the SSS’s activities there in those years.

There were annual, but minor inspection trips in the years from 1923 to 1925, but without further investigations. The management of the Scottish Spitsbergen Syndicate had by then concluded that the coal occurrences in Gipsdalen and the “Bruce City Coalfield” were worth exploiting, but only in co-operation with a company that was already active with mining in Spitsbergen. Negotiations were taken up with the The Anglo Russian Grumant Co. that was mining coal in Grumantbyen. But the talks didn’t lead to any results from the Scottish perspective; instead, Russian interests took over the Grumant coal field.

The end of The Scottish Spitsbergen Syndicate Ltd. 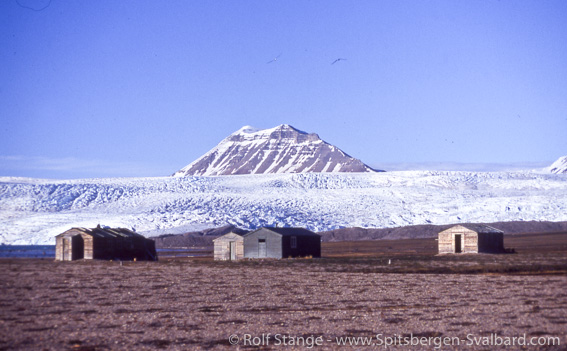 Brucebyen in 1997, with the original huts.

“Bruce City”, or in Norwegian: Brucebyen, is the most important cultural heritage today from the Scottish activities in Spitsbergen from 1908 to 1925, next to some smaller sites including two huts (one of them merely a ruin) and a tractor in Gipsdalen and some more ruins of huts on Prins Karls Forland. Unfortunately, one of the huts of Brucebyen burnt completely down in 2010 after careless handling of hot ashes by tourists. A reconstruction of the hut was made on the same place by the Sysselmannen. One of the other huts is owned and managed by the Sysselmannen for official purposes (including private use by the Sysselmannen’s employees) and another one is disposed by the Red Cross section in Longyearbyen and used, for example during crevasse rescue exercises on Nordenskiöldbreen. 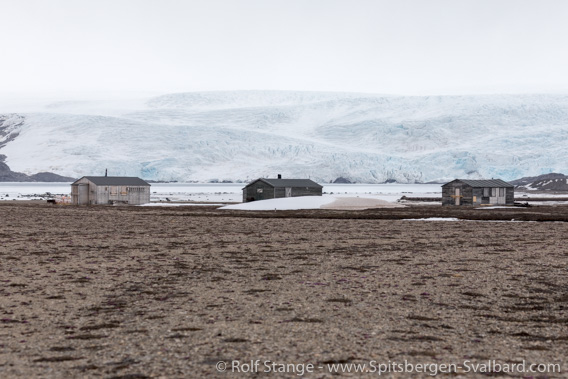 Brucebyen in 2018. The reconstructed hut is on the left hand side.

To round it off, some impressions from the main working areas of The Scottish Spitsbergen Syndicate, Bruce City (= Brucebyen) and Gipsdalen.