The 400 inhabitants of the Russian mining settlement Barentsburg have to live with difficult work- and general conditions. After a fire in the mine in early 2008, when 2 people lost their lives, mining was stopped for a while; currently, 30,000 tons per year are mined to keep the local power plant running. Full production on a level of 120,000 tons per year, still low on a global scale, will not come before summer 2010 – one year later than originally hoped for. A miner has now complained through the press about bad conditions, such as insufficient work power and equipment and, as a result of this, more or less regularly occuring dangerous situations. Also the wages of about one Dollar per hour are not exactly reason for happiness.

The leadership of the mining Company Trust Arktikugol does not show any understanding for the complaints.

In November 2009, Trust Arktikugol has lost a Norwegian court case regarding use of helicopters in Spitsbergen. Norwegian authorities have denied the Russians to use helicopters for other purposes than those directly connected to the mining activities of Trust Arktikugol. This is, in practice, restricted to transport of personell between Longyearben and Barentsburg. The Russians want to offer commercial flights for scientists and tourists, in the case of the latter at least to offer transportation from Longyearben to Barentsburg also during the winter. They refer to the Spitsbergen Treaty, which makes clear that all signatory powers and their citizens have equal rights for commercial activities in Spitsbergen. 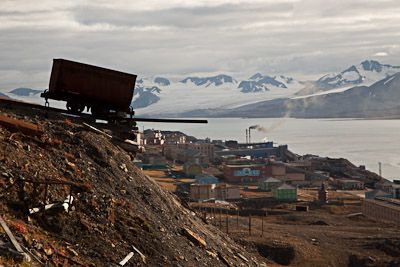 The ptarmigan is the only bird that stays in Spitsbergen year-round. Scientists have now equipped some ptarmigans with satellite trackers to follow them digitally through the polar night. So far, they seem to remain in the general area, migrating locally while searching for food. The Norwegian Polar Institute is publishing and updating the results ← Backhere. 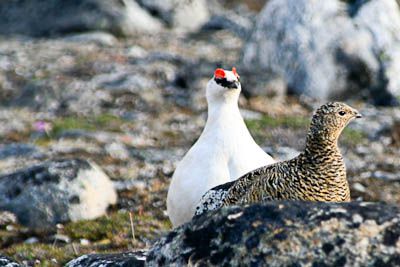 Introduced plant and animal species can create ecological desasters. Alien species have already been found in many parts of the polar regions, including Antarctica. In more recent times, the highest risk of introduction is use of contaminated boots that have been used elsewhere, possibly in climatically comparable high mountain or polar areas.

In 2008, scientists have tested boots of 260 visitors at the airport in Longyearbyen and found 500 moss fragments and 1000 seeds of 52 plant species, including many birch seeds.

Not just a rubber boot, but a potentially dangerous source of contamination 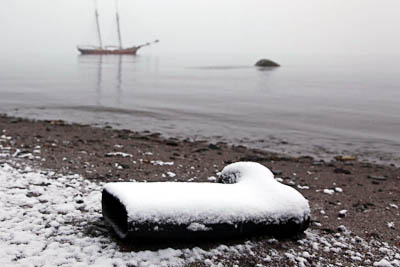 The idea to run Spitsbergen “carbon-free” is based on CCS: capturing and consequent storage of carbon dioxide in sandstone layers in the ground. After three scientific drillings had to be aborted due to technical difficulties, a fourth one has successfully reached promising sandstone layers at a depth of up to 870 metres. Less than 1000 metres that had been hoped for, but enough in case further testing shows the layers to be capable of long-term storage of CO2-emissions from, for example, Longyearbyen’s coal power plant.

Techniques thus developed by UNIS (the university in Longyearben) might in the future be used elsewhere in the world.

Successful: drilling project near the old airstrip in Adventdalen 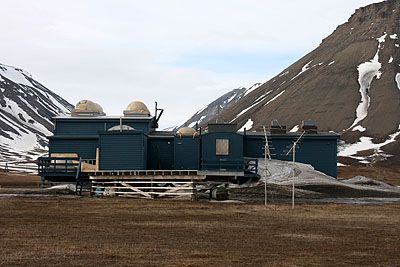