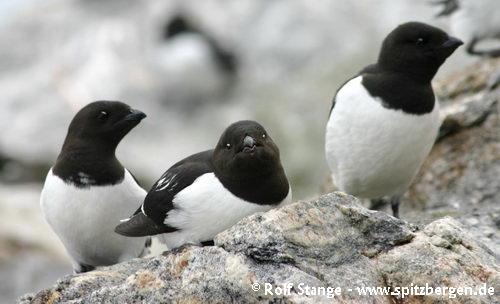 Description: Measuring 20 cm in length and weighing between 120 and 180 g, the Little auk is the smallest of the alcids in the North Atlantic. It has a stocky appearance with its large head, short beak and a strong neck. In flight, Little auks can be distinguished from Brünich’s guillemots by their smaller size and faster wingbeats.

Distribution / Migrations: The Little auk is the most numerous seabird of the high Arctic. Apparantly, it finds Iceland too warm or, more probably, diet requirements force the Little auk to stay in areas with colder water masses, which it finds in the high Arctic from Baffin Island in Canada to Severnaya Zemlya in the Russian Arctic. In Svalbard, it nests almost everywhere, but the largest colonies are around the northwestern corner of Spitsbergen and in Bellsund and Hornsund. Dense colonies require certain geomorphological characteristics such as steep scree slopes with boulders of a certain size, as Little auks breed under boulders. A minimum size of rocks is needed to create hollows of sufficient size, but if they are too large, then Arctic foxes can plunder the nest. The largest colonies comprise several tens of thousands of breeding pairs, but exact surveys have not yet been carried out.

The Little auk is amongst the first migratory birds to return to their breeding sites in the high Arctic, where they arrive as early as April or early May. They leave in mid August and spend the winter in open sea near southwest Greenland and towards Labrador.

Biology: During the breeding season, Little auks live primarily on crustaceans. They lay one single egg in the second half of June and incubate it for another 29 days. The chick stays for four weeks in the nest, until it can fly.

Miscellaneous: Attempts to count Little auk colonies in Spitsbergen have so far been more or less unsuccessful because of great practical difficulties, but the regional population may exceed one million breeding pairs. Because of the large numbers, Little auks play a significant role for the terrestrial ecology, as they transport energy in the form of guano from the sea to the tundra. It is estimated that each Little auk carries about 250 g of natural fertilizer to the tundra during the breeding season.

Breeding colonies are always on steep scree slopes and thus rather difficult to access. It is almost impossible to see the nest as it is usually under large rocks or in crevices. Nevertheless, you can observe them at the colony, as they like to spend some time sitting on boulders and are not very afraid of humans, provided you do not move. It is important to stay outside the actual breeding area, as any intrusion would create disturbance. Patience is needed until, sooner or later, a Glaucous gull patrols the area and the Little auks take off. This is a good moment to move closer until you have reached the outer edge of the colony. After a while, the birds will come back, but remember that you have to be very calm and motionless. Sometimes, the colonies are very active and visits are then an exciting experience, but at other times it is quite calm and then there is not a lot to see. This is also the case when a strong wind is blowing or at other, unpredictable times when the birds may be out searching for food or at home watching TV.

There are several smaller Little auk colonies on steep scree slopes around Longyearbyen (the slopes of the Platåberg towards the settlement, near Gruve (mine) one, in the little valley that leads down from the plateau to the moraine of Longyearbreen, on the slopes above Nybyen and, a bit further away, on the slopes east of the entrance of Bjørndalen. With local knowledge and a rifle (for protection), you can see them by taking a short day trip from Longyearbyen, but some walking in steep, rocky terrain is necessary.

Seeing a busy Little auk colony is an experience that you will not forget. The small, numerous, lively, noisy birds are the epitome of concentrated, intense life in the Arctic. An experienced birdwatcher once called them the “soul of the Arctic”. 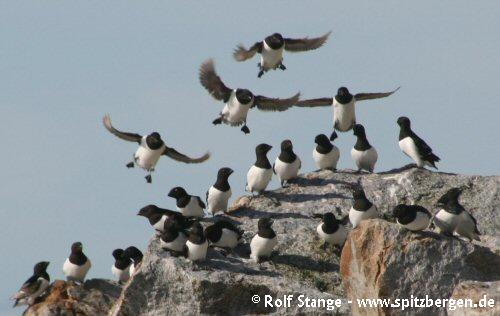