Engeløya is a tiny island on the north side of Barentsøya, in the northern part of Storfjord which is, in this area, also called Ginevrabotnen. Engeløya is named after a German statistician (Ernst Engel, 1821-96). Mister Engel has, however, never been to “his” island. 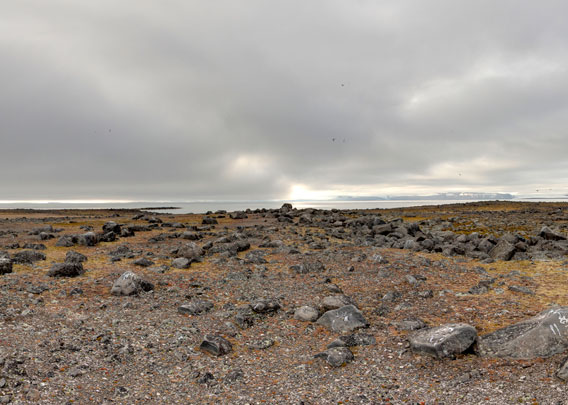 And it is neither known nor visible that anyone has actually ever been there. And why should one go there? It is a very small island and not easily accessible due to shallow waters and the rocky coast. Once on shore, you will find the island to be covered with boulders and large pebbles in some places and thick carpets of mosses and lichens in other places. During the breeding season, there will be a lot of ground breeders such as arctic terns and, near some small ponds, red-throated divers and other birds who appreciate a small island without arctic foxes.

A small, silent, forgotten island, that turns out to be a beautiful place if you happen to get close. It will be good if not too many people walk across the fragile vegetation, but considering the geography, I would think that the risk of too many visitors is pretty low.