Ice loss in the Arctic: already up to 80 % at minimum times

The loss of large areas of sea ice in the Arctic Ocean is an ongoing process. In September 2012, new negative records were reached once again. Now there is some more information about the quality of the loss: as expected, the ice is not only shrinking in area, but also in volume. The minimum distribution, that is usually reached in September, is now down to only 20 % of what it was in 1980 – a loss of up to 80 % within just 2 decades.

These results are part of a recent study of data of US- and European research satellites. The processes driving the loss are both atmospheric and oceanic and are not yet fully understood. This makes it difficult to predict the further development in detail, but there is little doubt that the loss will continue. 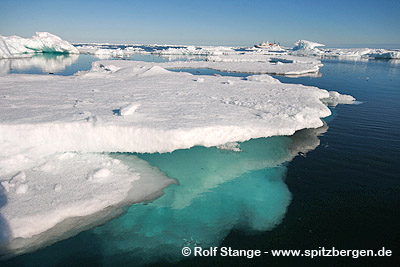 The opening of the seed vault near Longyearbyen was the occasion when this Spitsbergen news site was started, which is accordingly also celebrating its 5th anniversary these days. Three cheers!

This here is entry number 245. The frequency of entries, near 1 per week in average, has certainly increased in more revent times. Since number 1, the overall appearance of this website has changed completely. Its English section has also quite recently been moved to its own URL, spitsbergen-svalbard.com.

Screenshot of one of the first entries, February 2008. 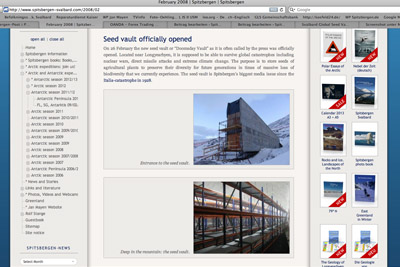 On 26 February 2008, the global seed vault near Longyearbyen was officially opened. The Norwegian minister for agriculture and food will be in Longyearbyen on Tuesday to mark the 5th anniversary of the vault. The opening in 2008 attracted worldwide media attention. Since then, more than 770,000 seed samples from most countries on the globe have been stored in the 3 halls, which are supposed to accommodate at least 1.5 million samples in the future. The natural temperature of the surrounding permafrost is -3 to -4 degrees centigrade. The temperature of the seed vault is constantly kept near -18 degrees.

The entrance is not far from the airport. It is easily seen and accessible by road. The interior is not accessible for the general public.

The vault is largely financed by, amongst others, the Bill and Melinda Gates Foundation, but also by global companies such as Monsanto, who are otherwise not known as guardians of biodiversity.

The entrance to the seed vault near Longyearbyen. 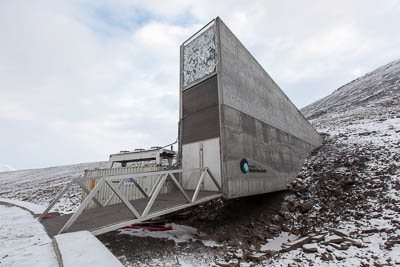 Barentsburg is currently the settlement with the strongest population growth in Spitsbergen: in early 2013, the official number of inhabitants was 471 persons or 101 more than 2 years ago. Longyearbyen has, in comparison, seen a plus of 30 during the same period. The minimum was reached in Barentsburg in 2010 with 370 persons.

The annual coal production has changed little and is still near 120,000 tons, a fraction of the production of modern coal mines elsewhere. The seams are said to last for another 12-15 years. Beyond mining, future fields of economic growth are supposed to be tourism and research. There may also be a new Russian coal mine in Colesdalen, but a decision about this is not expected before 2015.

“Our destination: communism”. This old sign is only of doubtful nostalgic value. Barentsburg’s future is supposed to be rather capitalistic. 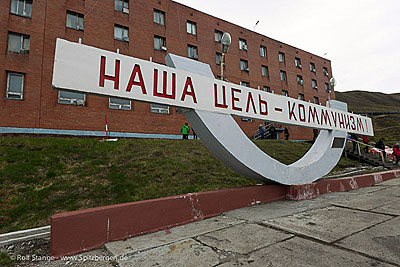 The trapper station at Austfjordneset in inner Wijdefjord may be opened again for trappers in autumn 2014. Until 2 years ago, the station, which has a comparatively long history and is now owned by the Sysselmannen, was open for use for hunters who would stay at least one year to hunt mainly polar fox and reindeer on a professional basis. The station was then closed for reasons that are somewhat unclear. Initially, it was stated that the operation required too much of the Sysselmannen’s resources, a reasoning that was difficult to follow: the maintenance was carried out anyway regardless of potential private use (and private users would actually contribute to maintenance) and the respective users would essentially be responsible for their own logistics and expenses (although it was custom that the Sysselmannen offered transportation with their vessel Nordsyssel, for example during the annual inspection trips in the late summer). In a recent press release, attention was rather drawn to inventory work on nearby historical sites and the local reindeer populations and their recovery from earlier hunting. 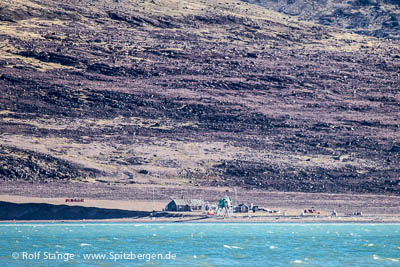 The Ross Sea coast near Coulman Island seen from the helicopter. 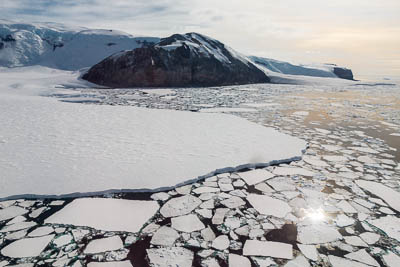 Milder winter weather with rain instead of snow is nothing completely new for polar areas with a maritime climate such as Spitsbergen, but there is more of it in times of climate change, a tendency expected to increase in the future. Rain that freezes to ice on cold ground during an already difficult season has always been difficult for reindeer, and an increased frequency of such events will make their already challenging life certainly not easier.

Pregnant female polar bears need slopes with good snow cover in the early polar night and good hunting grounds on sea ice in spring. Both, but especially the latter, may be lacking more and more frequently in the future with a changing climate. 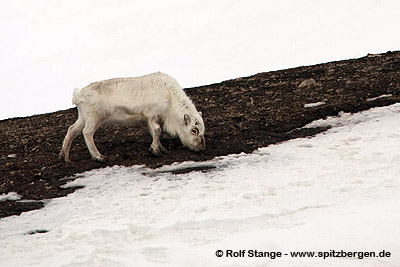 Ice in Tempelfjord too thin for Noorderlicht at usual position

Posted on 12. February 2013 by Kristina Hochauf

As last year, the ice in Tempelfjord (the innermost branch of Isfjord) is currently not strong enough for the two-masted schooner Noorderlicht to anchor and freeze fast for winter excursions from Longyearben. The ship moved deeper into Tempeljord and is now at anchor at Kapp Schoultz. 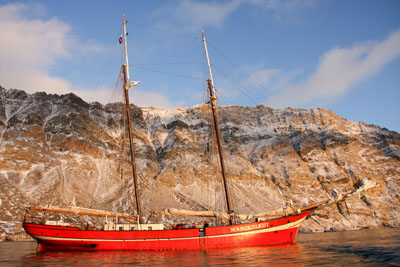 Spitsbergen-Svalbard.com and the Ross Sea

The relative lack of activity in the news-section of Spitsbergen-Svalbard.com is partly due to the relative lack of relevant news from Spitsbergen (look at it this way: no news are good news!), partly also to the absence of the main author, who is currently as assistant expedition leader on MV Ortelius on what could be called an “Antarctic Odyssey” from Ushuaia to New Zealand. A brief visit to the Antarctic Peninsula was followed by a successful helicopter-Landing on the rarely visited Peter I Island. The passage from there into the Ross Sea took some more time than scheduled due to heavy sea ice, but an intense 4 days brought a wealth of beauty and rich experience. The voyage brought new land not also from a geographic, but also from a photographic perspective: HDR and panorama technics were explored. Results can soon be seen on this website. 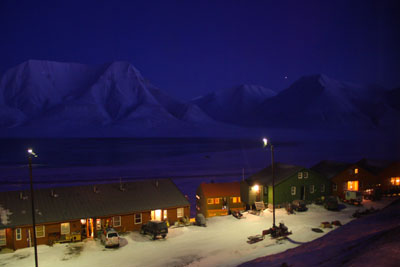 Queen Sonja of Norway in Longyearbyen

Posted on 10. February 2013 by Kristina Hochauf

Queen Sonja of Norway opened the world northernmost jazz festival “Polarjazz” and the exhibition “Tre reiser – tre landskap” (Three journeys – three landscapes) at Svalbard gallery. Queen Sonja presented also her own pictures (photographs) from a visit to Spitsbergen in 2006. There are, amongst others, pictures from an ice cave in Bolterdalen near Longyearbyen. 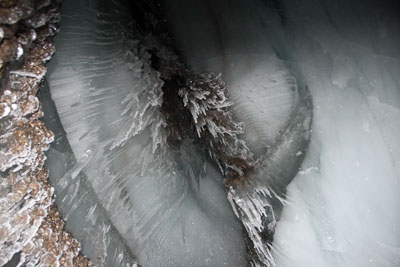