One intense week of arctic winter impressions in Spitsbergen in early March 2015: polar landscapes in the quickly changing light of the low sun on the boundary between polar night and midnight sun, when the light is changing from day to day. That is the purpose of our new photo trip into the arctic winter, for the first time im March 2015.

Using motor sledges (snow scooters) as effective means of transportation, we can get to various places in different areas to maximize the variation of our landscape experience and photo settings. The key is to have enough time and a small group to be flexible and make the best of whatever situation occurs. Alexander Lembke as photographic leader, Doreen Lampe as motor sledge expert and Rolf Stange will make sure we maximize our opportunities during this week.

This tour will be German speaking. Hence, the site about this tour is also German. For further information, please click here. 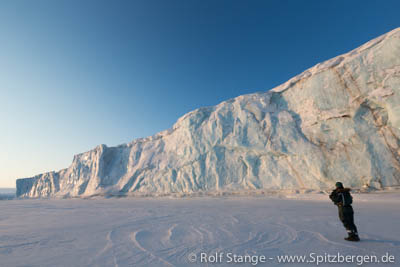 Site of the week: White-beaked dolphin

The new site of the week at spitsbergen-svalbard.com is a recently created site about the White-beaked dolphin. Dolphins are not exactly what you intuitively expect in the arctic, so it is quite surprising to learn of many there actually are. But not on the coastal waters and fjords of Spitsbergen, rather in the open Barents Sea. In recent years, I have regularly done the crossing from Norway to Bear Island and Spitsbergen in the beginning of the arctic shipping boat season. The abundance of whales and dolphins in the Barents Sea has always amazed me. White-beaked dolphins are the northernmost representatives of the dolphin family.

Click here to get to the new site of the week.

White-beaked dolphin in the Barents Sea. 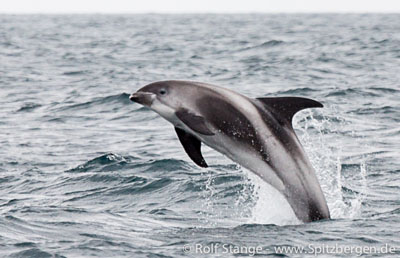 The Norwegian coal mining company Store Norske Spitsbergen Kulkompani (SNSK) will reduce the number of employees as a reaction to their loss-making mining activity in Spitsbergen. Rapidly falling world market prices for coal encountered rising costs for mining in the marginal parts of the old mine Svea Nord and for the exploitation of the new mine at Lunckefjellet. At an average coal price of 75$ per ton the company currently looses 10$ with every ton being extracted (see also Spitsbergen-Svalbard.com news Coal mining in Spitsbergen under pressure from November 2014).

Under high pressure Store Norske evaluates several possibilities of reacting to this economic crisis in order to save coal mining on Spitsbergen for the near future. It has already been decided that ca. 100 of the 340 jobs at Store Norske will be cut as soon as possible. The decision was published in the end of November and in the meantime the first group of 30 employees has been informed, that their contracts will run out. It is estimated, that all in all ca. 600 jobs on Spitsbergen are directly or indirectly depending on Norwegian mining. In addition to the employees of Store Norske these figures mainly include jobs at suppliers and service companies, in the trading sector and at public servicers, as school and kindergarten. If the Norwegians had to suspend coal mining completely, this would have a very strong impact on the relatively small community of only ca. 2000 inhabitants in the city of Longyearbyen. In 2013 Store Norske did already cut 80 jobs, one possible reason for the moderate population decline in Longyearbyen after a longer period of growth. A significant expansion of the two other strong economic sectors, tourism and research, as a compensation for a possible suspension of coal mining can not be expected in the short term.

Under these circumstances it is not only the management of Store Norske but also the local government in Longyearbyen which is concerned and intensively occupied with finding solutions to ensure coal mining on Spitsbergen. Therefore, members of Store Norske as well as the mayor of Longyearbyen, Christin Kristoffersen, recently traveled to Oslo for negotiations with bankers, the Norwegian government and the parliament.

Old coal mine: has seen better days in the past (Hiorthhamn-mine opposite Longyearbyen). 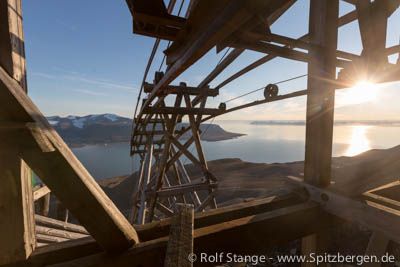 Site of the week: northern lights

The new site of the week at spitsbergen-svalbard.com is about northern lights (aurora borealis). It fits well as a follow-up to midnight sun and polar night, which was the last week’s site. 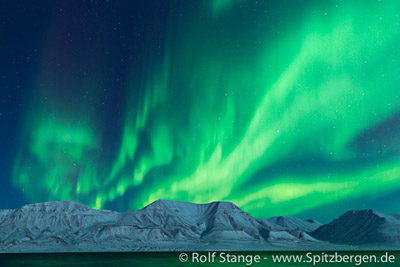 The number 52 is storytelling. This is the amount of precipitation (mm per months) measured in November in LOngyearbyen, in contrast to a normal monthly average of 15 mm. This makes November 2014 the wettest November in Longyearbyen ever since meteorological recordings were started in the early 20th century. Until now, the record was held by November 1993 with 46.5 mm.

Also the temperatures were above average, in Longyearbyen -6.4 degrees centigrade compared to an average of -10.3. The reason for the warm and wet weather is the high frequency of low pressures coming from the west with warm and moist air. Normally, there is a stronger eastern influence with colder and drier air in November.

The weather made itself felt in daily life: A few snow mobiles are now frozen solid on a ice-covered ground, and it may take the next real thaw to make them move again. This may or may not happen before May. And the hospital certainly had an above average number of patients who had slipped on clear ice. It is recommended to use spikes and light or a reflector if you walk around in Longyearbyen in these conditions.

Clear ice under a thin snow cover made walking in Longyearbyen dangerous at times in November. 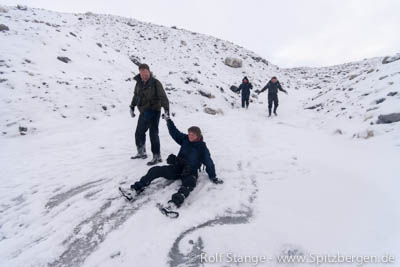 A virtual journey to a fascinating arctic island, as experienced and written by Rolf, published on the blog toffeefee or The World according to Dina. Enjoy! 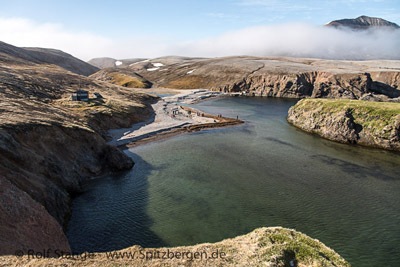 Site of the week: midnight sun and polar night

Site of the week at spitsbergen-svalbard.com: midnight sun and polar night. 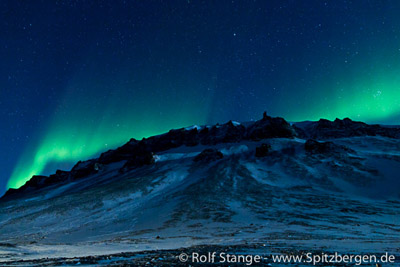