Natural and human history on Spitsbergen's west coast: some background 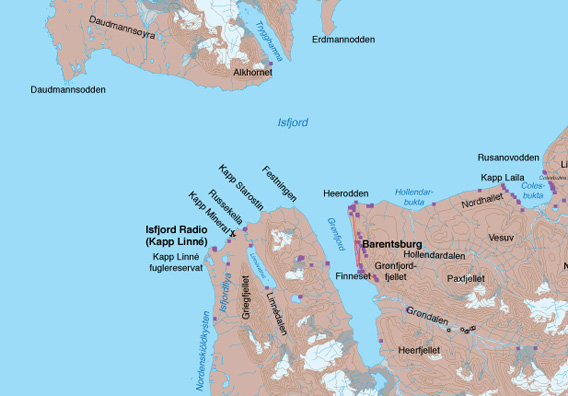 Kapp Linné is situated at the west coast just south of the entrance to Isfjord. In 1933, it became the saite of Isfjord Radio, radio and weather that provided communication with mainland Norway to all settlements in Spitsbergen and ships in the area. Since 1999, the station was run automatically and the staff was removed; soon, a fiberglass cable from Longyearbyen to the mainland made it obsolete. The buildings have been used as a hotel since the late 1990s. Definitely Spitsbergen’s most beautifully located hotel! If you are interested in staying there, then get in touch with Basecamp Spitsbergen. They can also provide transport and guided tours in the surroundings of Kapp Linné. The hotel has been renovated a couple of years ago; it lost a bit of the charme of a mid 20th century arctic station during the process but it has become more stylish and comfortable. 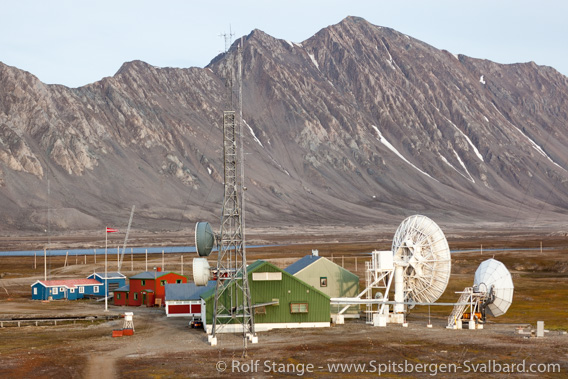 The Isfjord coast between Kapp Linné and Grønfjord has a lot to offer regarding geology, natural and human history and scenery, so you can easily spend a couple of rewarding days there – as always, it depends a bit on what you want, there are no calving glaciers there and if you happen to meet a polar bear there – something that is certainly possible – then this means trouble and potential danger rather than anything else.

There are several areas with dangerous shallows near the coast, so if you are out by boat or kayak, make sure you keep an eye on the chart.

There is a bird sanctuary directly south of the station area, which may not be entered between 15th May and 15th August. And Festningen and surroundings is a geotope, but that does not involve access restrictions; only if you want to take geological samples or anything like that, then you have to get your papers in place first, but that is the case anywhere in Spitsbergen.

The south coast of Isfjord between Kapp Linné and the Grønfjord is geologically interesting and well-known as the ‘Festningen-Section‘, so I will give it some space here. On a stretch of the coast of less than 10 km, you will find a relatively complete cross-section of the regional geology, starting with the pre-Devonian basement and reaching into the lower Tertiary, the youngest pre-Quaternary bedrock in Svalbard. This is due to the steep eastern dip of the strata: they are standing more or less vertically with a N-S trend, which is because of lower Tertiary tectonics. With a walk of a few kilometres, you can cover more than 300 million years of Earth history!

The start is at Kapp Linné with weakly to medium-metamorphosed basement rocks (phyllite, quarzite). The basement/cover-rock boundary is exposed on the north slopes of Linnéfjellet. Further east, you will reach hard Carboniferous quarzitic conglomerates (Devonian sediments are missing in this area).

The mountain on the eastern side of Linnévatnet (Lake Linné) is very conspicuous. Its northern elongation stick out into the Isfjord, forming a prominent cape, known as Kapp Starostin. This is the type locality of the Kapp Starostin formation, a series of hard, upper Carboniferous and Permian carbonate rocks and cherts. 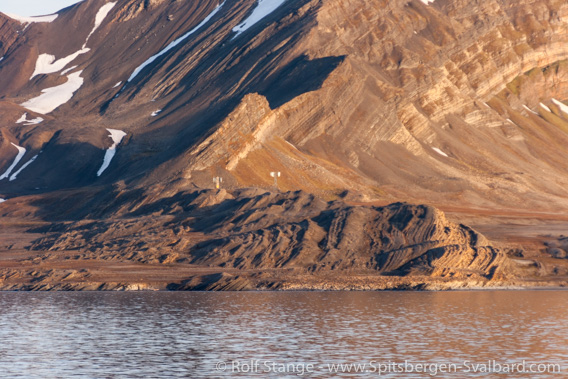 These carbonates, mostly limestone, are rich in fossils such as brachiopods and bryoza. These rocks are common in many parts of Svalbard.

West of Kapp Starostin, in the plain between the cape and Linnéelva (Linné river), there are sink holes (karst phenomena) which are associated with the solution of carbonate rocks.

The Mesozoic succession starts with Triassic sediments east of Kapp Starostin (the proper Permian-Triassic boundary is missing in Svalbard, because there is a regional hiatus). The Mesozoic sediments consist of relatively uniform clay- and siltstones and subordinate sandstone. Some of the layers are quite fossil-rich (ammonites, shells etc.). You can find lower Cretaceous rocks at the corner to the Grønfjord. These are the youngest Mesozoic rocks in Svalbard (the upper Cretaceous, and thus unfortunately the C/T boundary, are missing due to a regional hiatus). The Festningen Sandstone is very conspicuous, a layer of hard, quarzitic sandstone within the lower Cretaceous. As the other sediments in the Festningen section, it is standing in a vertical position and, due to its hardness, stands out like a wall in the landscape. Its northern elongation forms a small island which reminds one of a fortress, hence the name ‘Festningen’ (Norwegian: fortress).

In the 1960s, footprints of dinosaurs (Iguanodons) were found here, but the rocks in question have fallen into the sea since. New tracks are supposed to come to the light of day every once in a while, but I have never found any so far – if you see some, please let me know. If you want to see dinosaur tracks in Spitsbergen, then Kvalvågen on the east coast is a better choice (but it is difficult to get there).

On the island of Festningen itself, there is a navigation beacon resembling a lighthouse; there are geese and other birds breeding there as well as on the mainland nearby, so keep your distance! For geological excursions, you should come outside the breeding season, preferably in August. East of Festningen, on the western side of the Grønfjord, lower Tertiary strata are exposed, which are essentially the same ones as in the Longyearbyen area, just tectonically deformed. 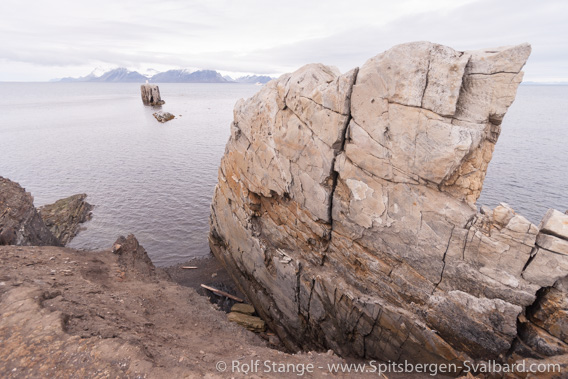 All in all, the area offers a very nice cross section through large parts of the geology of Svalbard. If you are interested in geology and you want to see a relatively complete and easily accessible (well, more or less) section, then you should think about the Kapp Linné-Festningen area – but, as already mentioned, you should come after the breeding season. Middle or late August will be good. Additionally, the area has of course beautiful and interesting landscape as well as some wildlife and history to offer.

You may find the area less spectacular than other places in Spitsbergen, as there are, for example, no calving glaciers and no steep mountains near the coast, which itself is a wide, coastal plain. But still, there is a lot to see. It is one of my favourite areas in Spitsbergen – I don’t know how many times I have walked up and down the coast between Kapp Linnè and Festningen, and I will surely do it again. The coast itself is mostly a steep cliff, about five metres high, with more or less flat tundra behind. Here, you can find nice frost-patterned ground and patterns of well-preserved beach ridges. 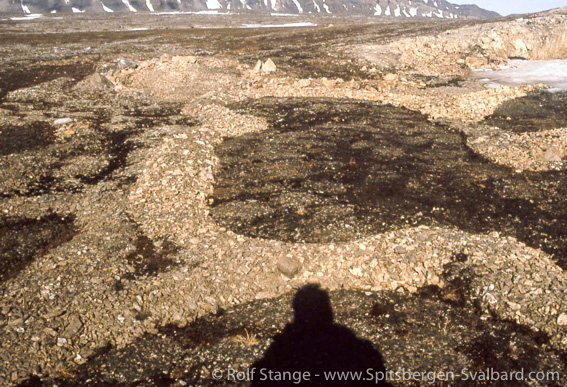 The tundra between Linnéelva and Kapp Starostin is very interesting, as there are dolines (sink holes) from underground carbonate solution, good fossil beach ridges and, if you go a bit inland, a very fine view over the lake Linnévatnet.

Festningen is a very interesting location (see above), a hard sandstone layer standing like a wall in the landscape on the corner to the Grønfjord (again, stay away from breeding geese and other birds in the season). Walking is more difficult east of Kapp Starostin than west of it, as the tundra is wetter and there are some steeply incised little valleys. The river Linnéelva is usually relatively easy to cross if you try half-way between the coast and the lake, but it may still be too high for ordinary rubber boots.

The tundra is relatively barren, especially north of Linnévatnet.

If you have come to Spitsbergen to see big arctic mammals, then Kapp Linné may not be your first place to go to. Polar bears visit the area more or less regularly, and there have been occasions when polar bears hang out around Isfjord Radio for days, something that can be a bit of a plague. It has even happened that a bear entered the entrance area of the main building! So it is certainly be important to take the usual precautionary measures. First of all: keep your eyes open and your brain switched on.

Sometimes a group of walrus can be found resting on the beach a few kilometres south of Kapp Linné. 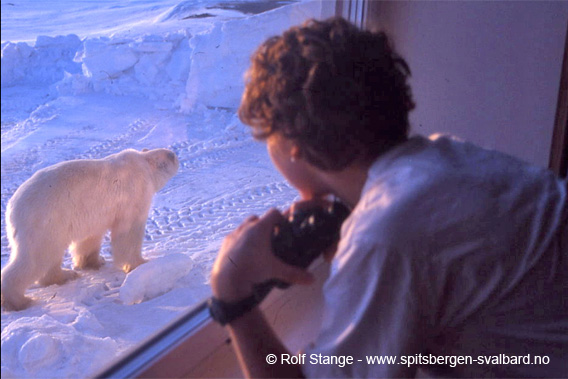 Arctic foxes and Spitsbergen reindeer are regular visitors. Hundreds of common eider ducks used to breed near the buildings of Isfjord Radio, even under the doors steps. Several ground breeding species are common in the area, so it is a good place for birdwatchers.

Remains from many different chapters of Spitsbergen’s history can be seen, although they are usually quite inconspicuous – don’t expect an exhibition worthy of the British Museum: traces of the past are often quite subtle in the Arctic, but they are nevertheless interesting.

17th century whalers used to have several stations in the Grønfjord area, including one near Festningen, but there is nothing left there to be seen these days.

The Pomors have also used the area as hunting ground. There was a large Pomor settlement/hunting station at Russekeila at the mouth of Linnéelva. There are still remains to be seen (the inconspicuous foundations with pieces of bricks; the huts are younger). The famous Pomor patriarch Ivan Starostin used to live here, legend has it that he stayed for 32 years, mostly without returning to the mainland at all! He died there in 1826 and, appropriatly, he was buried in the area; there is a pile of stones on the ridge near Kapp Starostin (near the antenna) that could be his grave. Altogether, Russekeila is one of Spitsbergen’s most prominent Pomor locations 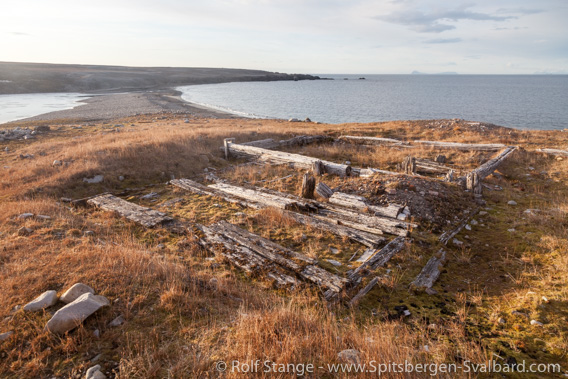 Remains of a Pomor settlement at Russekeila.

Remains from the ‘gold-rush period’, during which minerals have been investigated and claims taken into possession for the purpose of potential mining, can be seen at Kapp Mineral just east of Kapp Linné, a mine entrance is still visible where lead and zinc ore was extracted in the early 1920s. 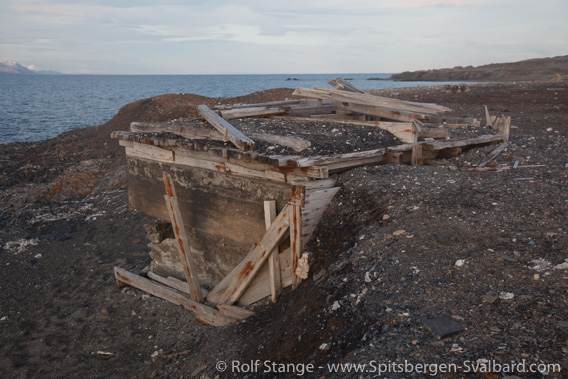 At Kapp Linné, the station Isfjord Radio provided radio communication between the various settlements on Spitsbergen as well as ships in the area and mainland Norway. In later years, Isfjord Radio was connected to the settlements via beam antennas. The nearest one is standing at Kapp Starostin. The last remaining technical staff was removed from Isfjord Radio in 1999. Today, the station is technically not necessary anymore, since a glass fibre cable has been laid from Longyearbyen to the mainland, and the buildings are used as a wilderness hotel (see above).