Artefacts from polar history lost in museum fire in Italy

A fire in the museum of science in Naples (Napoli) in Italy hast led to the loss of irretrievable artifacts from polar history. The exhibition was meant to focus on those aspects of polar history which are shared by Italy and Norway, such as the airship expeditions to the North Pole by Roald Amundsen and Umberto Nobile, who started 1926 and 1928 in Ny Ålesund. Now, both countries have lost some of their polar heritage.

According to media, fire raising was the reason for the disaster, which has destroyed the museum and thus 175 jobs. There is no information about people being injured. The motive is believed to be a local conflict about the attractive museum estate.

Some of the lost artifacts were brought to Naples from Norway especially for the exhibition. Lost are, amongst others, the skies that Fridtjof Nansen has supposedly used during his famous crossing of the Greenland inland ice in 1888, clothes used by Nobile during his North Pole flight with the Italia in 1928 and the logbook of the Norge, the airship that was used by Amundsen, Nobile and Ellsworth and their crew on their famous flight from Ny Ålesund across the North Pole to Alaska in 1928. It was most likely on this occasion that the North Pole was seen by man.

The airship Norge in 1926 near Ny Ålesund before taking off for the North Pole. The logbook is now lost forever. 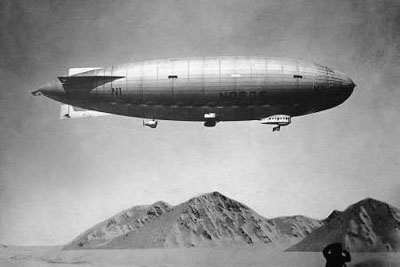 Spitsbergen is currently coming under strong pressure – regarding the weather. The meteorological stations in Svalbard are registring record-high air pressure values, stronger than anything that has been measured in history of local measurements, which is partly going back into the 1920s. A new record has been established at the automatic weather station on small Karl XII Øya (-island) north of Nordaustland, where 1054,7 hPa were registered a few days ago, significantly more than the old record of 1051,9 hPa from 1929.

Northern Greenland has currently partly even higher values. The high pressure is responsible for a period of calm, clear and cold weather, much to the delight of locals and tourists. The forecast for the Easter weekend in Spitsbergen is, however, predicting clouds, but still temperatures well below freezing. The cold weather is also beneficial for wildlife and the development of fast ice in fjords and drift ice east of Spitsbergen. The north coast is still largely ice-free, due to the influence of more temperate waters that have come up with the West Spitsbergen Current (“Gulf Stream”) from further south. On the eastern side, the drift ice has recently even reached Bjørnøya (Bear Island), where the first polar bears in 2 years have already been seen!

High pressure over Greenland and the European Arctic. Image: mountainforecast.com. 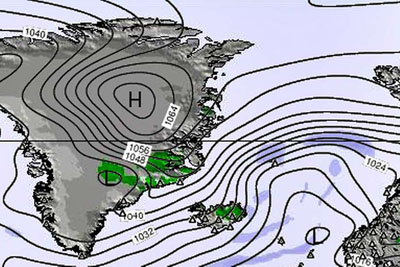 Our plans for an expedition to Jan Mayen in 2014 are getting shape. We are now aiming at the time from 28 June to 12 July 2014 (from and to Isafjordur, Iceland). Click here for more information about this exciting trip. We have already more interested people than places available, so please get in touch soon if you are interested in joining (contact). 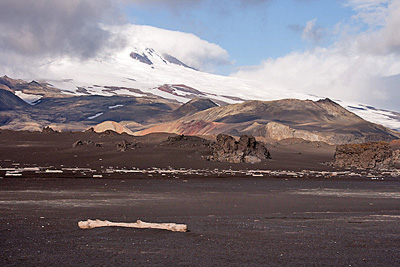 The latest CITES conference has not been successful in putting a ban on hunting polar bears. Several countries including Canada and Greenland still allow limited hunting, including trophy hunting for rich foreign hunters. As can be expected, this is met with substantial criticism by environmental organisations. During the latest CITES conference in Bangkok, Denmark was amongst the countries that expressed worries about a complete ban on hunting. Denmark is speaking for Greenland internationally. According to the CITES treaty, each EU country has a vote on its own in the conference. There is, however, an agreement that the EU countries agree on their vote or do not vote at all. As a result, important votes for a global ban on polar bear hunting were missing and an agreement was consequently not reached.

CITES is the legally binding Convention on International Trade in Endangered Species of Wild Fauna and Flora.

It is widely accepted that climate change is generally the most serious global threat for polar bears, followed by pollution with environmental toxins. But regionally, pressure from hunting can be significant, or at least its consequences for regional populations are not understood.

In Spitsbergen, where Norwegian law is valid, polar bears are and remain fully protected.

Result of a successful hunt on polar bears in east Greenland. 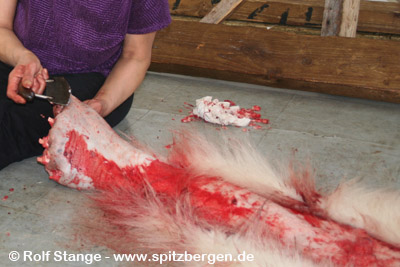 The Sysselmannen have concluded their investigation of the lethal incident in August 2012 at Esmarkbreen (Ymerbukta) (see Spitsbergen-Svalbard.com-news of August 2012). Juridically, the case is now closed, as no hard evidence for criminally relevant behavious was found.

The accident happened on 21 August 2012 when ice masses broke off and fell down from the calving cliff of Esmarkbreen in Ymerbukta. The ice did not fall into the water, but onto dry ground. Two Zodiacs of the French tourist boat Polaris I, each with 6 passengers and a driver, were in the vicinity. A woman was hit by a piece of ice and died almost immediately. It could not be established if the boat was closer to the glacier than 200 metres, which is the minimum distances as recommended by the Norwegian Polar Institute.

This section of the calving cliff of Esmarkbreen in Ymerbukta is resting on rocks at sea level. 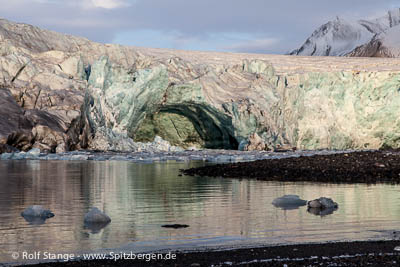 After a long period with very little ice, the drift ice has now surrounded most of the eastern parts of the Spitsbergen archipelago. It has even reached Bear Island (Bjørnøya) again, much to the delight of the crew of the weather station!

Drift ice in Herwighamna, near the weather station on Bear Island (Bjørnøya), on 1 March 2013. 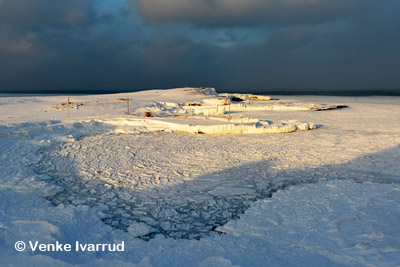