The Norwegian public budget for Spitsbergen was positive in 2009, for the first time in 33 years. Mainly tax income from major companies have contributed to the income. The mining company Store Norske is the largest tax payer (278 million Kroner), followed by the oil and gas plattform service company Seadrill Norge (92 millionen Kroner). In 2009, the netto transfer was 33 million Kroner from Spitsbergen to Norway. In comparison: in 2007, Spitsbergen was subsidised with 310 million Kroner, the figure for 2008 is 347 millions.

Happy to have some cash in the bank: Reindeer in Adventdalen 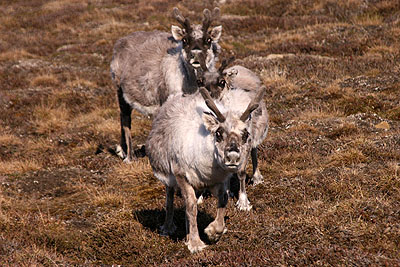 A new study has been published to assess the environmental impact of expedition cruise ships on the Svalbard environment. The study has been made by Akvaplan-Niva, a research organisation and consultancy within marine and freshwater environment, and it was encouraged and supported by AECO, an organisation that represents the expedition cruise operators in the region. After observing several smaller (70-100 passengers) ships in the field, the authors compiled a detailed study concerning different aspects of the operation. A summary includes the following points:

Polar Star was one of the ships observed by Akvaplan-Niva 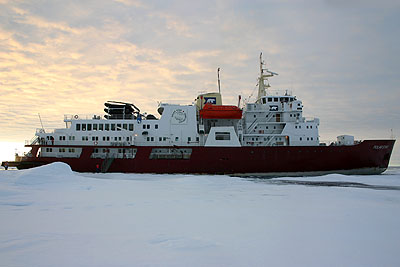 Source: Svalbard Science Forum, including the report by Akvaplan Niva

In 2009, Jason turned his company into a shareholder company, for which other regulations apply. The unforeseen consequence was that Jasons routine application for for a work permit in Norway was turned down. Jason needs such a permit only for occasional work in Norway, but not in Svalbard. Nevertheless, the foreigners authority informed Roberts that he has to “leave Norway voluntarily” and contact the Sysselmannen to discuss further details. In the Sysselmannen, though, it was quickly clear that the letter had to be wrong. As all citizens of Spitsbergen treaty signatory countries, Roberts has automatically equal and unlimited rights to live and work in Svalbard without any applications or permits. The foreigner authority said the letter was “somewhat misleading”. Roberts himself made rather clear that he was not amused. 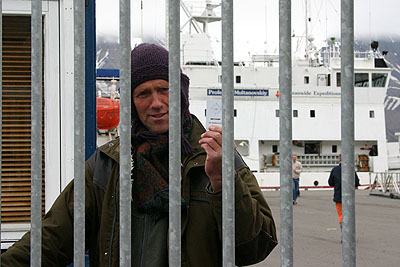 The Japanese zoo Nihondaira has applied for a female polar bear from Spitsbergen to be delivered to Japan, for exhibition together with a male bear that already lives in the zoo, and to produce offspring.

The Sysselmannen in Longyearben reacted reluctantly, saying a good reason could not be seen to catch a polar bear in Spitsbergen for delivery to a Japanese zoo, and that the matter is not realistic. Polar bears are completely protected in Spitsbergen since 1973.

Likes to stay where she is: polar bear in Svalbard 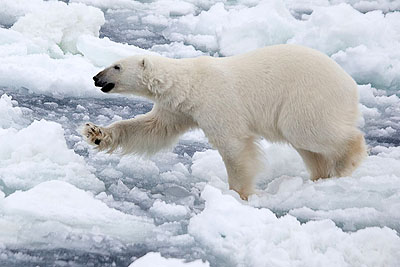 A polar bear has attacked the dogs of the Polish research station in Hornsund. One was killed, two more were injured. The bear had already spent several days around the station and attacked the dogs. Even warning shots and rubber bullets had failed to scare the bear away.

The Sysselmannen has now tried to scare the bear away with the helicopter. All station members were vaccinated against rabies, as some had been in touch with the dogs that had been attacked.

Polar bear and dog, Kapp Linné (1999). The dog survived without injuries, but had to step aside and let the bear have its dinner. 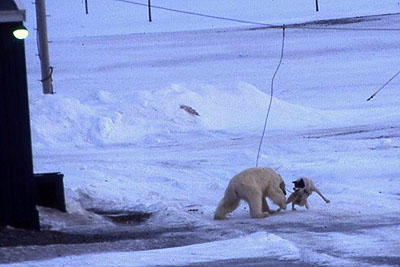 Because of the regulations of the Spitsbergen treaty, Spitsbergen is VAT-free zone and has a low company tax of 16 % rather than 28 %, as in mainland Norway. Consequently, Longyearbyen is an attractive place for companies to settle down, but authorities are getting stricter on conditions to be met by companies taxating in Spitsbergen: a local office and management are needed. The low tax regulation is for local companies rather than tax refugees.

Two companies have recently been „expelled“ from Spitsbergen, including a daughter of the oil rigg provider Seadrill Norge. With only one man in Longyearbyen, the company had an income of about 700 million Norwegian Kroner (88 million Euro), more than the largest local employer Store Norske (mining, 557 million Kroner).

Climate change in and around Spitsbergen

Everybody is talking about climate change in the arctic, but what is actually going on? The Norwegian Polar Institute, through its MOSJ-project (environmental monitoring of Svalbard and Jan Mayen), has gathered a range of data that make it quite clear that accelerating climate change is a measurable fact: the temperature has a tendency to increase during most of the 20th century, with a marked and still increasing acceleration in recent years. Precipitation is following, although the trend is less pronounced and clear here.

The sea ice has decreased by 35-40 % (area; referring to maximum distribution in April) from 1979 to 2009, and it is getting thinner: from 1.20 meters (1966) to 0,80 meters (2006) around Hopen island. Temperatures at the top level of the permafrost are by now increasing as fast as 1°C per decade, and glaciers around Ny Ålesund have lost 15 meters of average thickness, also here with a strongly accelerating tendency in recent years. 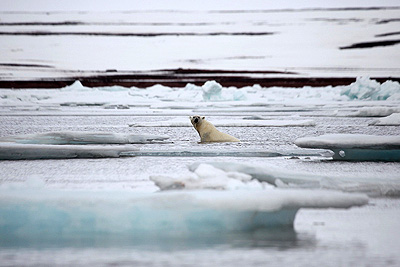