Now you can follow spitsbergen-svalbard.com on facebook. As probably the last ones in the business, we have recently established a facebook page. Posts are more frequent there than in the spitsbergen-svalbard.com news section, not only including important stuff from the arctic, but also small stories from polar voyages fresh from the field, news from the polar book factory, gems from the photo archive, … from real news to the occasional just purely funny post. You will find all posts both in English and in German.

We are looking forward to visits and „like it“ clicks at

Spitsbergen-svalbard.com (Rolf Stange and MaLou, the logistics- and shipping department) 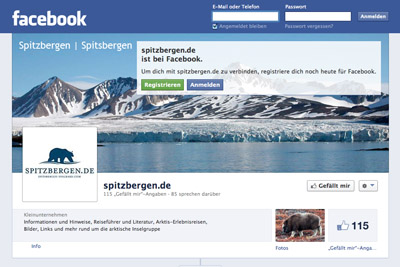 Oil in Spitsbergen? Oil and gas have been looked for multiple times since the 1960, and nothing of economic value had been found so far. It did not seem a relevent question anymore, at least onshore.

Now it seems possible that there might be oil in relevant quantities where few would have expected it: naturally stored in the coal. The paleocene (60 million years ago) coal that is mined in Spitsbergen has an oil content that is higher than usual. Was the oil extracted from the coal and sold separately, then the value of one ton coal might see a significant rise: 150 oil-dollars against 70-80 dollars from coal sales, based on current world market prices. And even the residual coke might still be sold for energy production.

The oil potential of Spitsbergen’s coal reserves is roughly estimated at 700 million barrel: not a „gamechanger“ on the world market, but potentially very important for the local mining company, Store Norske. This does not include any reserves from coal older than the Paleocene. There is coal from the Devonian, Carboniferous, Triassic and Cretaceous in Spitsbergen, but these have not been investigated enough to say anything about their oil potential.

In any case, the value of the resources would rise significantly. This might also make coal seams interesting, that have so far been considered commercially unimportant.

If this ever becomes reality, is anything but certain: there is, so far, no process available that could be used commercially in Spitsbergen on an industrial scale. And any process would require substantial investments, something that would provide difficulties for Store Norske, which is currently facing a huge deficit. And finally, exploitation of so far untouched coal resources would be politically highly controversial, even in the oil-and-gas-country Norway.

Shipping coal from the port of Longyearbyen: will there be pipelines next to the cranes in the future? 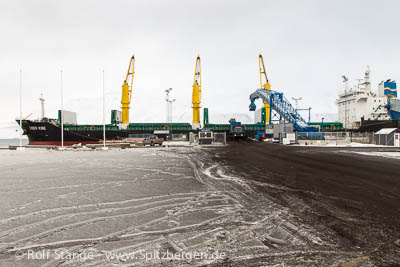 Gas in Spitsbergen? Oil and gas have been looked for multiple times since the 1960, and nothing of economic value had been found so far. It did not seem a relevent question anymore, at least onshore.

Until recently, when gas was found by pure coincidence in quantities that has caused renewed interest and could actually lead to production in the future. It was during a research drilling for the CO2 storage project in Adventdalen (see “Longyearbyen CO2 neutral?” in spitsbergen-svalbard.com-news from May 2013) that gas started to flow out from the well with a constant pressure of 25 bar. The source rock is a shale at a depth of 700 meters. The owner of the area is Store Norske, the mining company that is running the coal mines in the same area (mine 7) and in Sveagruva.

There is, however, still a long way to go before any production might potentially start. Substantial and expensive explorative drilling is needed to investigate the nature and volume of the occurrence. If Store Norske is able and willing to invest heavily seems at least currently unlikely: the company is currently in a difficult economical situation.

It would be a twist of irony if reserach within a project designed to make the energy production in Longyearbyen CO2-neutral would lead to the production of even more fossil energy in Spitsbergen.

The CO2-Lab in Adventdalen near Longyearbyen: time will show if this is the site for future CO2 dumping or gas production. 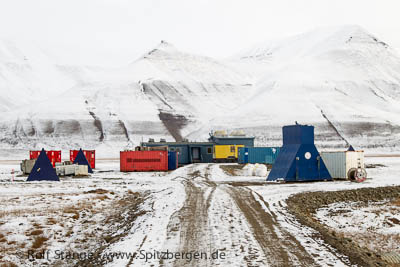 The 4th updated edition of Rolf Stange’s guidebook “Spitzbergen-Svalbard” (German version) is now available. Many text sections in almost all chapters have been updated or added, there are many new colour photos, a whole new page block of 16 pages with text has been added. A new cover makes the 4th edition recognizable as a new book. There are more than enough updates to make the purchase worthwhile also for owners of previous editions. Click here for more information about the new edition of “Spitzbergen-Svalbard” (4th German edition). 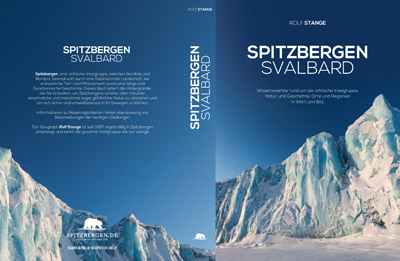 Scientific field work on polar bears is usually anything but animal-friendly. Fotos and videos from polar bears being chased by helicopters have more than once been seen and met with critizism. As a personal observation, we hardly see polar bears anymore that have not been marked by scientists. Near-contact with scientists, which can safely be assumed by be a very stressful, if not traumatic experience, is thus likely to be the rule rather than the exception for Spitsbergen’s polar bears.

Recently, a polar bear did not survive the scientific treatment. A young male, 2 or 3 years old and physically in good shape, was found dead 2 days after anaesthetisation by scientists at Meodden on Edgeøya. A possible explanation is that the animal has moved from a sideway position. It was found lying on the stomach and had suffocated. Anaesthetisated polar bears are left behind lying on the side to prevent suffocation, but they are not monitored. Suffocation after changing the position or predation by other bears can accordingly never be excluded. 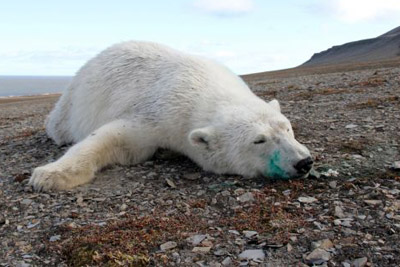 Loss due to fewer cruise ship tourists in Ny Ålesund

Ny Ålesund has received considerably fewer tourists in 2013, compared to the 2012 season. A year ago, visitors numbered near 40,000. This figure decresed to 25,000 in 2013. According to the director of the owner company, the consequence was a loss of 2 million Norwegian Kroner in harbour fees and souvenir sales.

The reason is believed to be the expensive compulsory pilotage, which is currently being introduced stepwise, and the ban of heavy oil as ship fuel, although ships using heavy oil may still visit Ny Ålesund and Magdalenefjord until 2014. 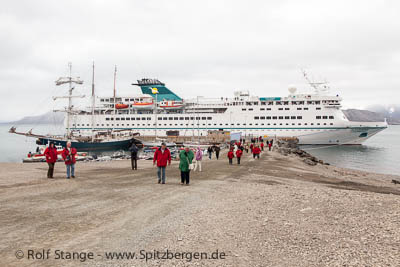 The Greenland shark is the unknown big animal in marine arctic ecology. Until recently, scientists have not spent too much attention to this large shark, and little is accordingly known about them. But during a scientific catch in Kongsfjord some years ago, surprising numbers were caught: dozens of sharks in a short time. They can be up to 7 m long, which places them amongst the largest sharks in the world.

Surprising was not only the number of sharks present in the bottom waters of Kongsfjord, but also the high levels of long-lived environmental toxins, which equal the high concentrations sadly known from polar bears in Spitsbergen.

Another surprise was their diet: the stomach content was mostly fish and seals. Appearently, they are efficient hunters and not just scavengers, as had been believed until then. The diet is likely to be the reason for the high levels of contaminants, which accumulate through the food chain and over time. The long life span of Greenland sharks may accordingly be another contributing factor to the high level of contamination. During the research catch, the biggest individual caught was as heavy as 700 kg, but not even old enough to reproduce. 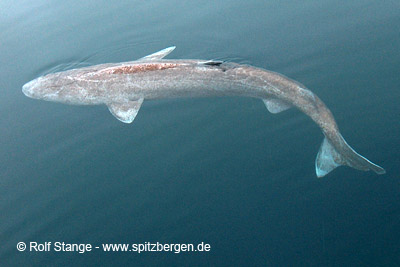