On 26 February the new seed vault or “Doomsday Vault” as it is often called by the press was officially opened. Located near Longyearbyen, it is supposed to be able to survive global catastrophes including nuclear wars, direct missile attacks and extreme climate change. The purpose is to store seeds of agricultural plants to preserve their diversity for future generations in times of massive loss of biodiversity that we currently experience. The seed vault is Spitsbergen’s biggest media issue since the Italia-catastrophe in 1928.

Entrance to the seed vault. 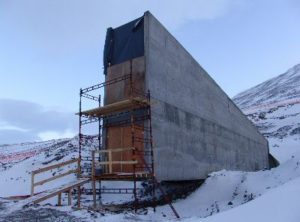 Deep in the mountain: the seed vault. 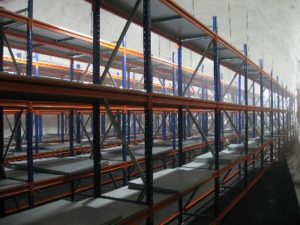 Spectacular finds of dinosaur skeleton remains in the Isfjord area

Parts of dinosaur bones from Isfjord have been known since the early 20th century, but things really started to happen when Norwegian palaentologists found remains of no less than 28 individual marine reptiles near Diabasodden (Tempelfjord in Isfjord), dating to the Jurassic (about 150 million years old). Most of them are Ichthyosaurs that looked more or less similar to dolphins, others are Plesioraurs, larger predative reptiles. One Pliosaur (subgroup of Plesiosaurs) must have been 15 metres long and is thus the largest of its kind that has been found so far, as has recently been announced.

Skeleton of the “monster”, as the 15 m large Pliosaur is inofficially called. Only the red parts have been found.

Pliosaur having breakfast, as “seen” by an artist.

Many inhabitants of Longyearbyen woke up in the early night on 20 February, when an earthquake made houses shake noticeably at 03.46 am. Damage or injuries did not occur. The epicentre was in Storfjord near the southeastern coast of Spitsbergen, about 120 km away from Longyearbyen, near a geological fault that may have been re-activated due to stress caused by movements at the middle Atlantic ridge system that is dividing the bottom of the ocean into two different tectonic plates in the Fram Strait (between Spitsbergen and Greenland). The earthquake was recorded with 6.2 on the Richter scale – more than enough to cause damage if it had happened on land in a more densely populated area. The event is quite exceptional, as Spitsbergen is seismologically mostly quite calm, as opposed to Iceland, which is situated directly on top of the middle Atlantic ridge.

In March 2008, some minor cracks have been found at some buildings in Longyearbyen, which are believed to date back to the earthquake.

The approximate position of the epicentre is marked with a red dot. Green symbols show the active settlements.
(© Karte Rolf Stange) 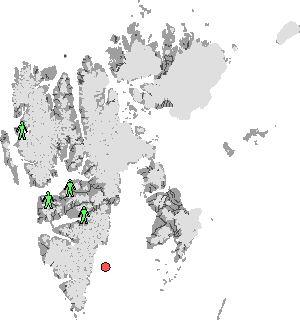