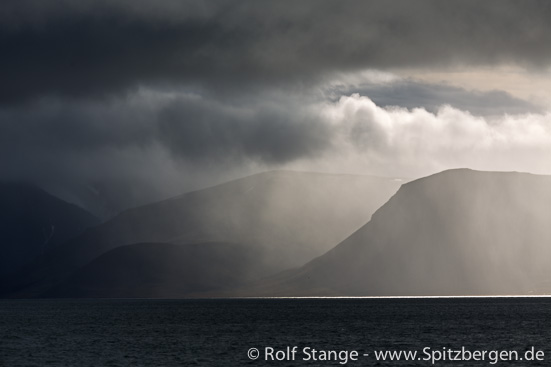 Light and clouds in Van Mijenfjord.

Spitsbergen’s climate is influenced by two oceanic currents: the West Spitsbergen Current is the northernmost surface branch of the gulf stream, bringing relatively mild water to Spitsbergen’s west and north coasts and giving these areas a milder climate with less drift ice. The East Spitsbergen Current, in contrast, brings colder water masses with a lot of drift ice from the Arctic Ocean in the north pole basin, making the eastern parts of the archipelago a bit colder in climate, with much heavier ice conditions.

The average annual temperature in Isfjord is -7,5°C (reference period: 1960-1990). This is warm considering the latitude of 78°N, a consequence of the influence of the West Spitsbergen Current (Gulf stream). The climate is accordingly high arctic with a strong maritime component. July is the warmest month with 5°C, the temperature fluctuations in summer are moderate. Temperatures below freezing are rare between late June and early August, and more than 10°C are likewise exceptional. Wind and clouds are very important for how one actually experiences the temperature. There are those rare summer days when you can enjoy sitting in the sun in a T-shirt. 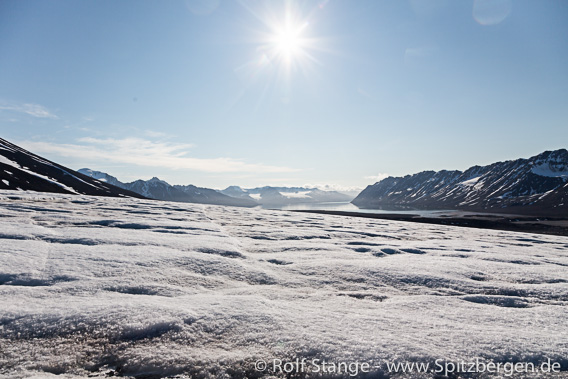 February is the coldest month with almost -15°C temperature average (again, the reference period is 1960-1990). In winter, temperature fluctuations are more pronounced, you have to expect temperatures down to -30°C, occasionally even colder, as well as warm weather spells with thawing temperatures and rain even in the polar night. 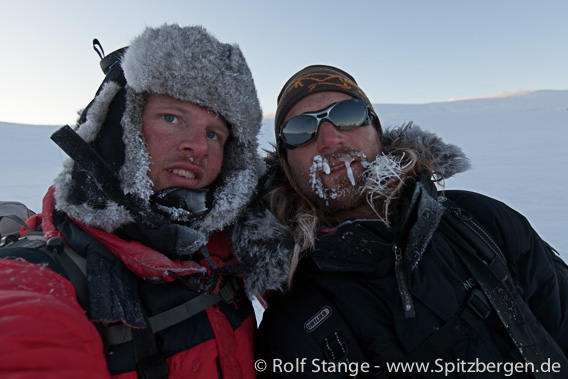 Fog is common because of the different air and water masses meeting and mixing in the Barents Sea. In Longyearbyen (airport), the meteorologists record 13 fog days per year on average, fog being defined as a visibility of less than 1 km. On Bjørnøya (Bear Island), the corresponding number is an impressive 64. 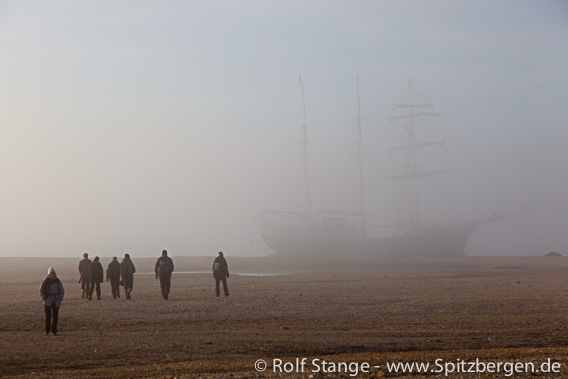 Fog in Wahlenbergfjord, Nordaustland. In this case, the sun managed to break through the fog layer.

Precipitation is generally low, with just under 200 mm/year in Longyearbyen (airport) and 400 mm on the west coast (Ny Ålesund). This doesn’t mean that it doesn’t rain. It just means the raindrops are smaller than elsewhere. You will get wet anyway. A lot of it is, of course, falling as snow. 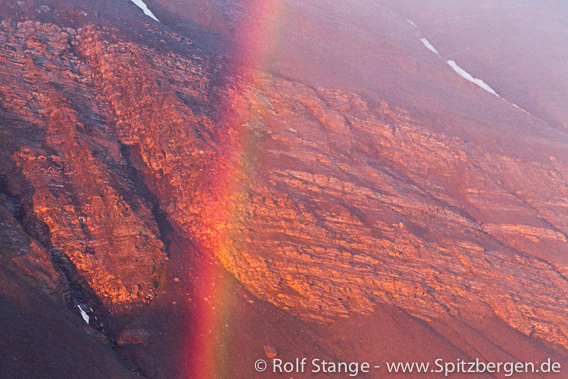 Rainbow in Bellsund. A rain shower can have its beautiful sides.

The wind is changing constantly in time and in space. Whatever wind you have got where you are, it may be completely different in the next valley or fjord or within half an hour. Spitsbergen is not as windy as Iceland, Scotland or the Falkland Islands or South Georgia. In summer, calm days are more common than strong winds, but a low pressure may always move through, bringing 1-2 days of strong wind or even storm. The risk of strong winds is increasing in autum and winter, it is at its lowest in June and July. 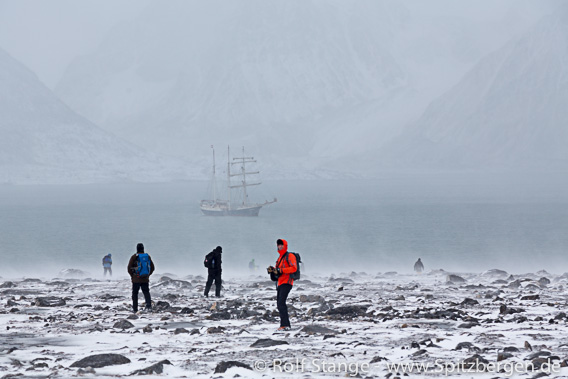 Strong wind and snow drift at Lloyd’s Hotel in Krossfjord.

By now it should really be common knowledge that climate change is an ongoing development and not an obscure prediction and it makes itself felt more strongly in the Arctic than in lower latitudes. In Spitsbergen, the rise temperature is stronger than anywhere else in Europe, the winter temperatures have already risen by 2 degrees. There is appearently a tendency towards milder winters with more frequent warm air influence, and wetter, windier summers. The general retreat of glaciers is a very evident phenomenon, very apparent to everybody travelling in Spitsbergen for just a couple of years. Scientific data provide solid evidence, for example from glaciers near Ny Ålesund and in Hornsund, in the vicinity of scientific stations. A more detailed analysis of climate change and its causes are beyond the scope of this website. The statement that climate change is a fact that we do observe and experience in Spitsbergen (and elsewhere, for that sake) and not just a prediction will be enough here.