Spitsbergen was no man’s land until the early 20th century. Several nations in northern Europe had occasionally been interested, but not to a degree that made it worthwhile to negotiate the issue seriously. Most were happy to keep the archipelago no man’s land; as long as nobody else achieved control, it was not important enough to raise interest in political circles and to risk disputes with other countries. Most resources such as whales and fishing were rather independent of the actual land area anyway.

Things changed in the late 19th and early 20th century, when mining became the dominating field of economy in Spitsbergen. Suddenly the question of land control became important, especially there was a demand for reliable administration and legislation. Various options were discussed, such as a joint administration of Spitsbergen by its nearest neighbours Norway, Sweden and Russia.

The first world war drew interest away from the Arctic. During the peace conferences in Paris, the Norwegians could convince other nations to put Spitsbergen under Norwegian souvereignty. This was formally done with the Spitsbergen Treaty, which was signed on 09 February 1920 in Versailles (the term “Svalbard” was not used until later. Today, the treaty is commonly referred to as “Svalbard Treaty”, but this term is not historically correct). 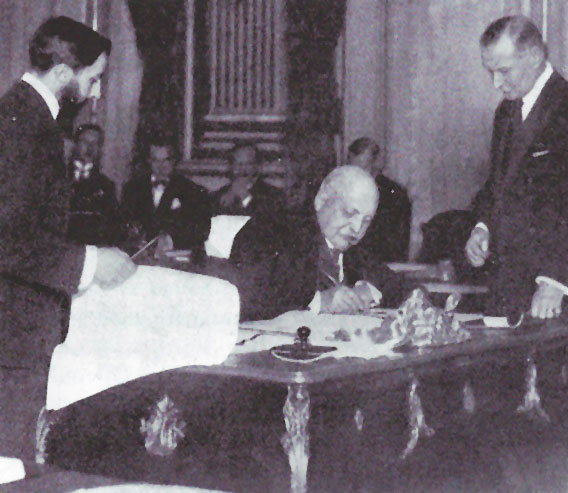 In 1925, the treaty came into force and was included in Norwegian law. The “Svalbard law” (this is where the term “Svalbard” came in) came into force on 14 August 1925. This day is considered Svalbard’s national day in Longyearbyen.

But Spitsbergen did not become a part of Norway just as any  other part of the mainland. The treaty defines several frame conditions, such as

In practice, this has not alway been easy. Especially the definition of what is or is not military has been difficult on occasions. In 1975, the opening of the airport near Longyearbyen raised protest of the Sovjet government, which stated that the airport could be used for military purposes. Facilities to launch research rockets have to be removed after every rocket launch. In the Russian settlement Barentsburg, the size of the helicopter fleet and the helipad has at times had a size far beyond the actual needs of a mining settlement and company.

Regarding military presence, “permanent” is an important term that should not be overlooked. Norway’s coast guard is regularly present in Spitsbergen’s waters, executing Norwegian sovereignty. The Norwegian coast guard is part of the navy and thus a branch of the military (in Germany, it is a police force, not military). Article 9 of the treaty says “… Norway undertakes not to create nor to allow the establishment of any naval base in the territories specified in Article 1 and not to construct any fortification in the said territories, which may never be used for warlike purposes.” Non-permanent military presence is obviously not automatically a breach of the treaty, such as the regular presence of the Norwegian coast guard or the occasional presence of a Norwegian frigate, but Norwegian politics keep Norwegian military activities in Spitsbergen on a low profile. Foreign armed forces are, however, obviously a different question. In 2016, Chechen special forces were suddenly seen on the airport in Longyearbyen, on their way to a military exercise in the area of the Russian ice Camp Barneo, close to the North Pole. This was certainly not met with great public sympathy, but even Norwegian officials commented that this was probably not a breach of the Spitsbergen Treaty. In the Svalbard White Paper of 2008-2009 (chapter 3.1.5, section C, page 23 of the pdf version), the Norwegian government makes it pretty clear that any foreign military activity in Svalbard is prohibited and would be seen as a severe breach on Norwegian sovereignty (“Enhver fremmed militær aktivitet på Svalbard er forbudt og ville innebære en grov suverenitetskrenkelse.”)

The treaty has served its purpose altogether well. It is the only one of all the treaties signed in 1920 in Versailles that is still in force and it is not substantially questioned by anyone, although there are critical voices concerning particular issues. Russia has occasionally rumoured that Spitsbergen might become a source of conflict, potentially even leading up to a war, according to the Barentsobserver in an article from 2017. Drastic words! This perspectiv is obviously not shared by Norway or any other treaty party.

But – there has been criticism. Pretty much the only aspect today where most governments disagree with Norway is the situation regarding the territorial waters. According to Norway, within the coordinates that define the treaty area, only the territorial waters are governed by the treaty regulations, that is the twelve mile zone (four miles until 2004, then the zone was re-defined). According to Norway, the waters outside the twelve mile zone, but within the exclusive economic zone (200 miles) are exactly that – an exclusive economic zone where Norway can limit the rights of any third party. It is not surprising that other governments and their citizen’s companies with interests in fisheries, oil and gas do not necessarily agree with this. Amongst the governments that have expressed disagreement are Latvia, who entered the Spitsbergen Treaty as the currently last country on 13 June 2016 (a few months after North Korea) and Russia..

An additional contract or possibly a verdict by the International Court of Justice in The Hague might sort this out, but Norway’s position is that the existing treaty is clear and there is no need for further negotiations or agreements.

Russia is the only nation next to Norway which makes use of the right of mining. The settlements on both sides suspiciously kept an eye on each other during the cold war, but co-existed peacefully. Today, there are regular official and private contacts.

Click here for the English version of the Spitsbergen Treaty (pdf). This is a version that was modified by the Norwegian ministry of justice in 1988 – as mentioned, the original text does not know the term “Svalbard” at all. For the rest, the text is as signed in 1920.