Halvmåneøya as a virtual panoramic tour 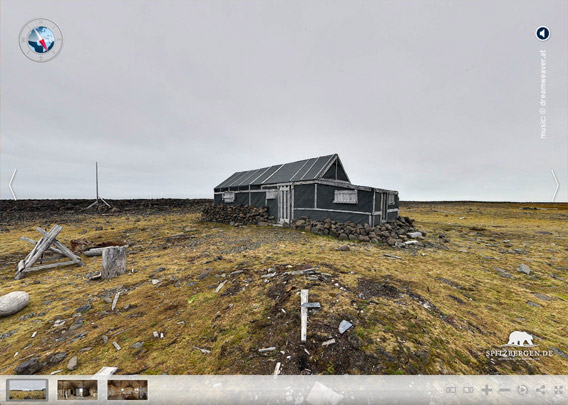 Halvmåneøya (Halfmoon Island) is a small, rocky island east of Edgeøya, exactly in the area where the East Spitsbergen current brings a lot of heavy pack ice with a lot of polar bears in spring. This is where professional polar bear hunters had their most important hunting area. Trappers have wintered 8 times between 1946 and 1971, with a total catch of about 905 polar bears, most of them with selfshot traps. The „record“, if you want to use this term here, was set in 1964-65 with 144 bears by Andreas Bjørnsvik and Kjell Johansen.

The hut Bjørneborg was originally built in 1904 and in 1935 it got more or less the shape it still has. Later modifications were removed again, in 1995 the hut was renovated. Next to Fredheim in Tempelfjord, Bjørneborg is certainly amongst the most famous trapper huts in Spitsbergen.
The first Norwegian wintering on Halvmåneøya was in 1898-99, but both winterers died from scurvy. Some remains of their hut can still be seen in a short distance south of Bjørneborg, not far from the shore.

Graces, old selfshot traps, polar bear bones and remains of a second hut near the southern end of the island are silent witnesses of intense polar bear hunting over several decades. The last wintering trapper on Halvmåneøya was Per Johnson in 1970-71.

Since 2010, the island is strictly protected because of this historical heritage. The only part that can still be visited is the area directly around Bjørneborg, the rest is off limits. Crazy, but that’s how it is.