Long-lived environmental toxins such as PCBs, insect repellents and fireproof materials containing bromine are enriched in the arctic food chain and provide a serious enrivonmental threat to species on high trophic levels such as Ivory gulls, Glaucous gulls and Polar bears.

From 1995 to 2004, concentrations of such substances have dropped by 50 to 80 % in tissue of Ringed seals in Spitsbergen. Ringed seals are an important food source for Polar bears and commonly used for human consumption in Greenland and arctic Canada.

The decrease shows clearly that legal measures in countries that are major producers can provide significant improvements. Future challenges consist in including newly developed, but similar substances in the legal framework and in introducing such laws worldwide. Most western countries have adopted similar laws and signed international agreements (“Stockholm-convention”), but some important countries are still missing, such as the USA.

Polar bear and Ivory gull at lunch.
Undesireable additives are likely to be present. 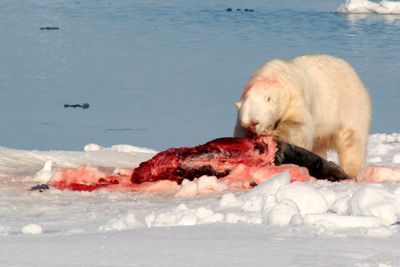 SvalSat, based on Platåberget near Longyearbyen, was installed in 1996/97 as a base station to receive data from satellites in polar orbits. The combination of good infrastructure of near-by Longyearbyen and the position close to the pole make SvalSat unique and an important link in the chain of global satellite systems. Currently, there are 16 minor and larger antennas standing on Platåberget, but the number is to be enlarged soon. Major demand is expected when the European satellite-based navigation system “Galileo” will be established in a few years, providing an alternative to the US military-controlled GPS.

The Norwegian Antarctic station Troll will serve a similar purpose in the southern hemisphere. 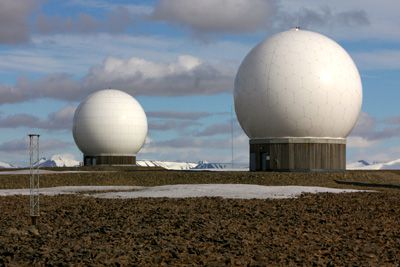 Recenty, a surprising observation has been made in Wijdefjord (central Spitsbergen), when a polar bear killed a reindeer – so far, it has largely been assumed that polar bears eat dead or injured reindeer, but don’t hunt animals that are in good shape. This raises the question if the observed behaviour is really as rare as assumed (although this was not the very first observation of its kind) or if it is more common.

Should it turn out that polar bears are actually able to catch reindeer, then this might be an advantage for the bears in case their main habitat, the drift ice, continues to shrink due to climate change. 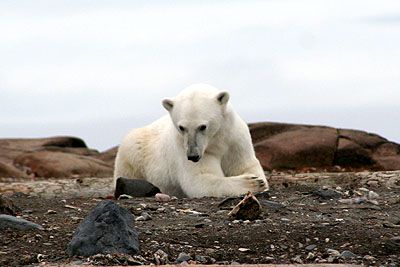 The new year has seen a calm and cold start in Spitsbergen, with temperatures below -20°C. The eastern part of the archipelago is mostly surrounded with drift ice, while some “warm” water keeps the northern and northeastern coasts still rather open – let’s see how things develope until we start the shipping season in June. Meanwhile, a smaller field of drift ice currently forces the Noorderlicht to stay for another while in Longyearbyen, while they were preparing to sail to Tempelfjord, where the Noorderlicht traditionally stays frozen in fjord ice during spring. 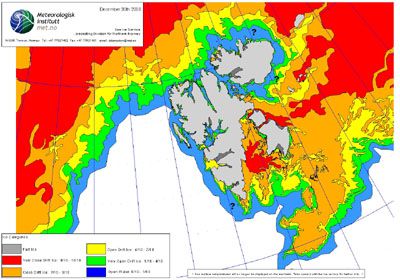