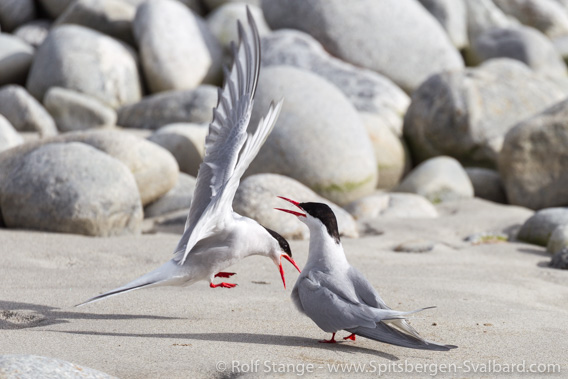 Description: The Arctic tern is the only tern that breeds in Spitsbergen, and it is thus unmistakable. Female and male look the same to human eyes. Being 35 cm long and weighing 100-125 g, the Arctic tern is a relatively small bird. 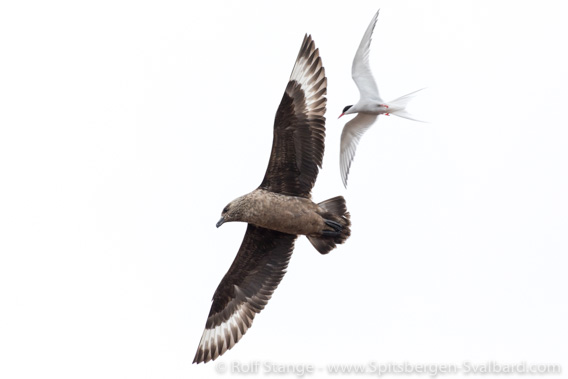 Distribution / Migrations: The Arctic tern has a circumpolar distribution in the sub- and high Arctic. It is the northernmost breeding tern species and the bird with the longest annual migration: The breeding sites in the north and the wintering sites as far south as coastal Antarctica are up to 15,000 kilometres apart! Arctic terns return to their breeding sites in late May or early June and stay there until late August or early September.

They breed in the vicinity of settlements, such as near the camping site and near the shore of Adventfjord in Longyearbyen or inside Ny Ålesund. If you come to Spitsbergen in the summer, you should know what you have to expect near Arctic tern colonies (see below; Miscellaneous).

Biology: Arctic terns breed in more or less dense colonies on flat tundra, mostly near the shore and on the beach or on small islands. They are often seen diving down onto the water surface to catch small fish, crustaceans or insects. 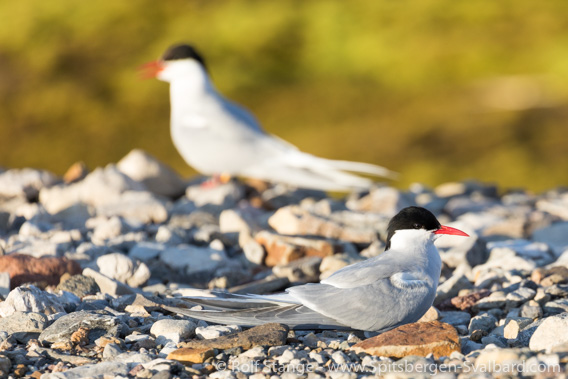 They will start breeding as soon as the nesting areas are free of snow, but may lose a whole season if the snow melt comes very late. The nest is in a little depression directly on the ground. Here, the female lays two eggs (occasionally one or three), which both parents sit on for about three weeks. The chick will leave the nest after three days, stay another three weeks with its parents and then become independent. 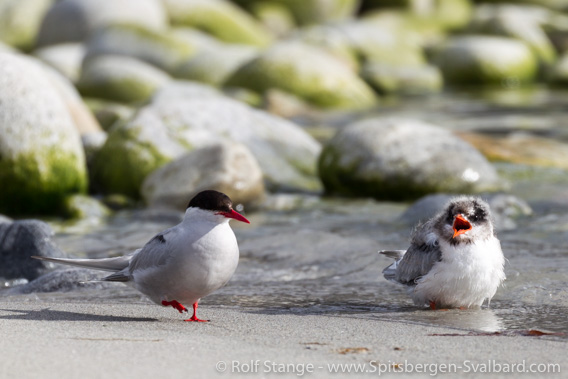 As with other sea birds, Arctic terns have a low reproduction rate, but a high life expectancy. One individual was seen 21 years after ringing and had obviously changed much less in appearance than the biologist who had ringed it.

Miscellaneous: Arctic terns defend their colonies fiercely against any intruders: predating birds, Arctic foxes, Polar bears and humans are all dive-bombed without hesitation and occasionally scratched by the sharp beaks. This can annoy Polar bears to such a degree that they decide to retreat. If you come under attack from Arctic terns, leave the area quickly. Do not try to photograph the nest (same as with any other bird). The birds will attack the highest part of you with a lot of noise. The easy solution is to hold up your tripod, walking stick, shooting iron, or partner calmly over your head – but never hit these small and vulnerable birds; don’t even wave whatever you hold up, it is simply not necessary but may harm the birds. As Arctic terns defend their colonies so effectively, other birds such as Common eider like to breed amongst them. If annoyed too much by persistent aggressors such as foxes or bears, the terns may try to find another place in the next season.

The total population numbers around 10,000 breeding pairs (feels rather like 10,000,000,000 near aggressive colonies); the population trend is unknown. 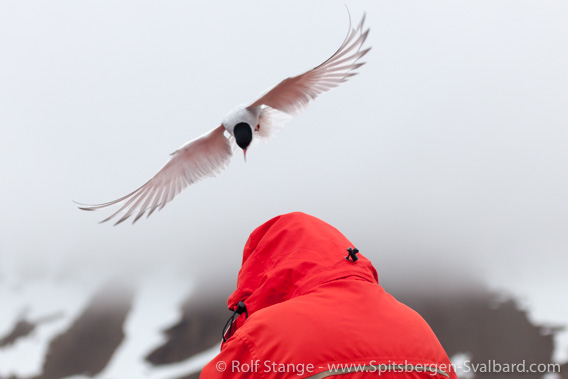 Air strike on tourist in Ny-Ålesund.